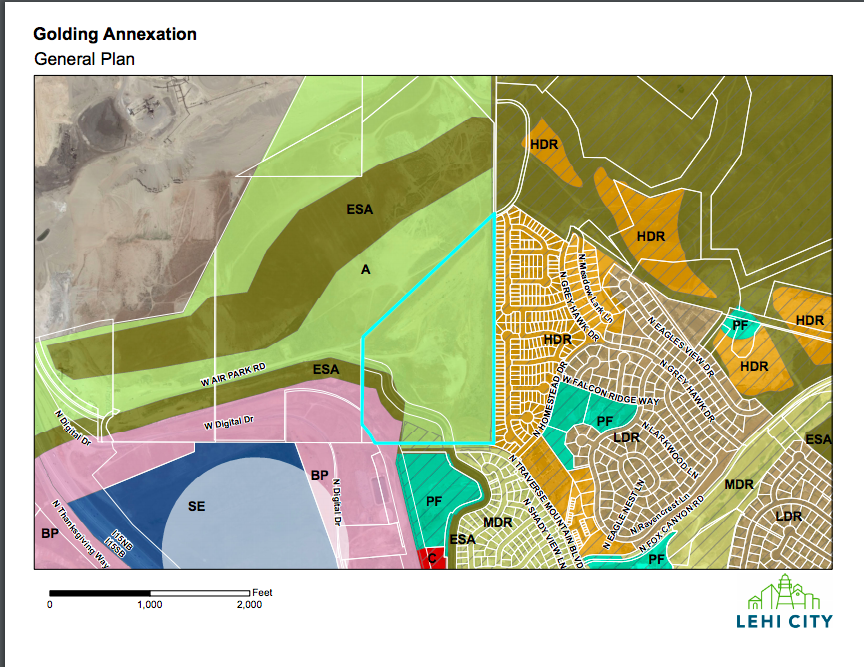 In the August 28 Lehi City Council meeting, council members heard a presentation in Pre-Council meeting about the dust in Traverse Mountain.

For several years Traverse Mountain residents have been concerned about the grading/mining operations in their neighborhoods. Lehi Mayor Mark Johnson along with City Council members asked the Utah Department of Health Environmental Epidemiology Program to examine the health effects of the silicate construction dust and fugitive dust generated by the work in the area.

Sam Lefevre, head of the state program, along with physicians Nathan LaCross and Evelynn Zirena, explained the physiological effects of the dust. “The size of the particulates creates the greatest risk. The smaller the size the more dangerous to the lungs,” said Lefevre. “There are different kinds of crystalline silica. The most dangerous is that associated with stone cutting, mining and quarrying. This resulted in black lung or silicosis, prevalent in coal miners.”

Cameron Boyle, Assistant City Administrator, asked the doctors, “Is the dust coming off the mountain toxic?” Lefevre responded, “amorphous or fugitive dusts is less dangerous.” Lefevre referred to a study in Brigham City, mentioned by opponents of the grading/mining in Traverse Mountain. “There were two issues in the study, dust and vapor. Dust was not an issue. There were dangers associated with vapors and recommendations were made to improve conditions. Lefevre concluded the presentation by stating, “automobile exhaust is the most dangerous pollutant.”

During regular City Council meeting, Rob Ludlow, a citizen of Traverse Mountain addressed the City Council about the 12- year project of Beck and Beck, the company responsible for the grading in Traverse Mountain. “They have over-graded and not followed the grading plan,” said Ludlow. He continued, “I respectfully request staff to monitor grading and wrap it up by the end of the year.” Mayor Johnson remembered the agreement. Ludlow added, “Originally this was a volume-based plan. When you re-boot this plan there needs to be more city oversight.”

Ludlow also asked about the sales tax paid on removed material. “All that material has been moved and we haven’t seen any sales tax.”

Stan Lockhart gave a presentation to the City Council on Ranked Choice Voting (RCV). He explained that RCV allows voters to prioritize their vote by numbering candidates from one through however many candidates. For example, if there were 5 candidates running, the voter would rank them 1 through 5. If one candidate didn’t receive 51% of the vote, then the candidate with the lowest number of first choices would be eliminated and the second-choice votes would be distributed from the people who voted for the eliminated candidate. This process would continue until a candidate reached 51% of the votes.

Lockhart said there are four advantages to RCV: 1) produces more civility in elections because candidates want everybody’s #2 votes. 2) produces more engaged voters. Voters want to find out more about the candidates. 3) produces majority winners. If you get more than 50% of the votes you are the winner. 4) eliminates primary elections and is cheaper.

Lockhart said the bill advocating this system passed unanimously by the legislature. It was not a partisan issue. Additionally, it is supported by technology.

Lehi City Attorney, Ryan Wood, asked who Lockhart was representing. Lockhart replied, “Utah Ranked Choice Voting PAC. Mayor Johnson asked why the PAC is interested in this. Lockhart said it was funded by donors who want to strengthen our democracy. Marilyn Banansky, Lehi City Elections Chairman had reservations but said, “There is nothing here we can’t overcome.”

The longest discussion in the council meeting was concerning the new ordinance regarding Accessory Dwelling Units (ADU). Mayor Johnson and Lorin Powell, Lehi City head engineer. explained that the infrastructure in the city would needs to be updated if the ADU ordinance is passed. Mike West, a member of the Lehi City planning staff explained the ordinance was written to encourage more affordable housing in Lehi. Impact fees were discussed. The problem of how to encourage affordable housing was discussed.

There was discussion about parking of tenants. Council member Condie felt that parking shouldn’t be an issue as long as tenants weren’t parking on the street. Condie also felt that ADUs should be allowed throughout the city and available to everyone.

The definition of a renter was asked by Councilor Revill. West replied, “We cannot restrict family members from living with family.” Condie also inquired about limiting square footage of ADUs to 1,500 square feet. He recommended removing the 1,500 square foot limit and leaving 49% of total area of the home as the ADU.

Charlotte Erickson, a citizen, felt the ordinance requiring concrete or asphalt for parking was restrictive. Erickson inquired, “What about gravel for parking?”

The ordinance was passed unanimously.