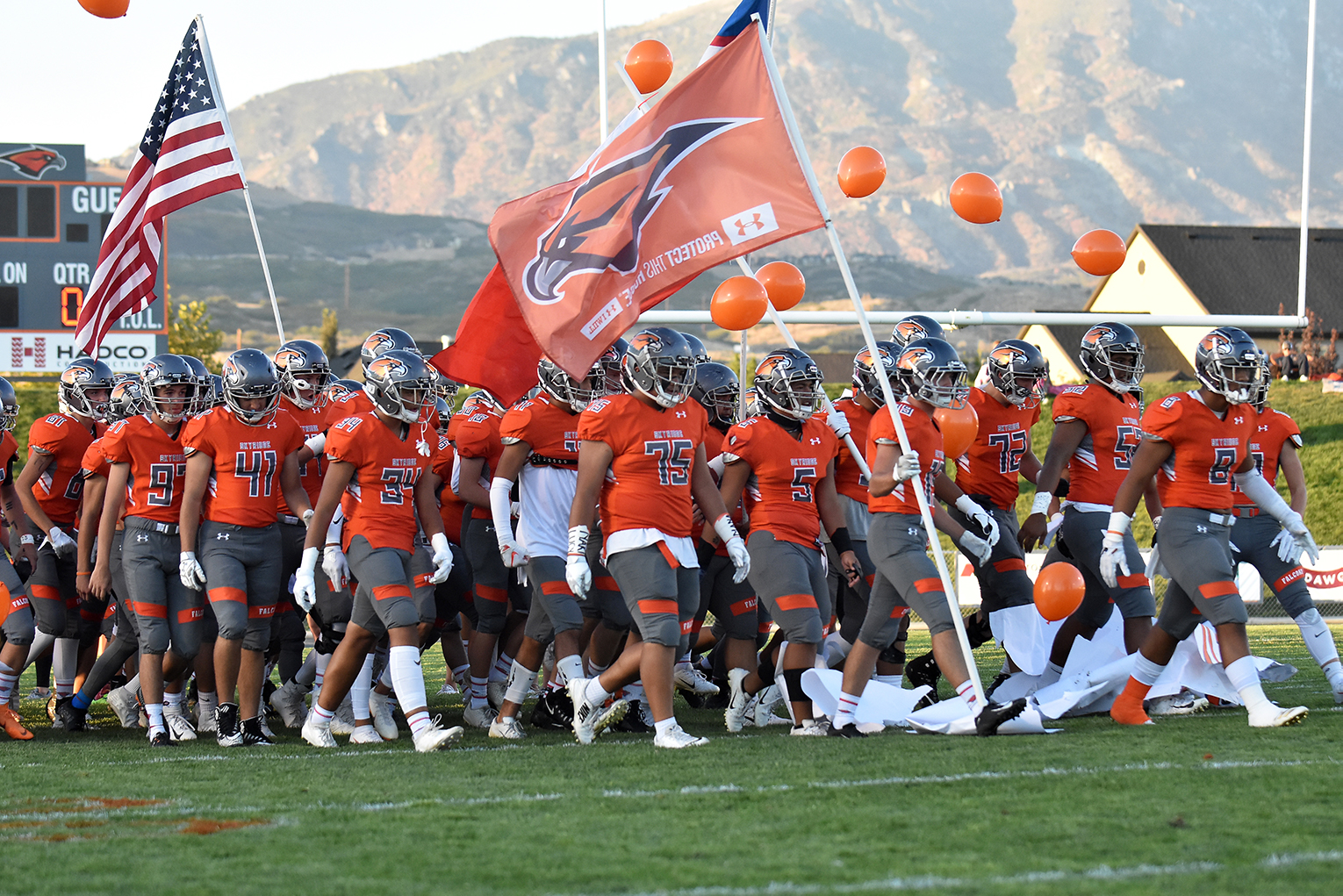 Skyridge played a big game on Friday as they took on their biggest opposition in Springville.  The Skyridge Falcons have had difficulty in competing with the Springville Red Devils the past two years, this year was no different. This game brought adversity and opposition for the Skyridge Falcons but that didn’t stop the Falcons from competing with great strength and from not quitting until the final whistle was blown.

The Falcons went into the game with a winless history against the Red Devils. “Those games in previous seasons against Springville were good learning experiences for us,” Jon Lehman, Skyridge head coach said.

Skyridge started off strong as Ma’a Notoa powered the ball down the field 45-yards.  His strength was leading as the next play Jayden Clemons quickly connected with Nathan Upham for a touchdown with a 15-yard pass.  Connor Harris completed the PAT for a 7-0 lead.

The Red Devils managed to get on the board with a safety when a Falcon snap sailed over Harris’ head and through the end zone.   The score was 7-2. Although the Falcons dominated the game and their defense proved too much for the Red Devils to score offensively, the Falcons earned every point they gained on the scoreboard.

Despite the many penalties and setbacks Skyridge never let up and continued to dominate the  Red Devils. The second half was just as overpowering for the Falcons and victory was never in doubt. Springville was never able to score offensively and finished with less than 100 total yards.  During the third quarter, Red Devil, Tyler Strong returned a kick off 70-yards for a touchdown.  Just prior to crossing the goal line Strong was flagged for taunting the Falcon players trailing him. That gave the Red Devils a total of nine points.

Defensively, Peyton Ainsworth intercepted a pass. Loholani Raass had two sacks and eight solo tackles. Iosepa Nawahine had his first pick of the season. The Red Devil quarterback felt pressure throughout the game as the Falcon defense forced errant and early throws.

The Falcons maintained their power offensively as their ground game dominated the field.  Notoa stood out with 249 yards and 25 carries as well as Clemons, who gained 155 yards on 15 carries. Despite the lopsided penalty calls against the Falcons, it was evident that Springville was the most-aggravated team. The Falcons continued to gain yards and put points on the board while the Red Devils finished with less than 100 total yards.

Lehman said to his team, “We beat them down tonight. We understood what we needed to be successful and we took advantage of opportunities when they came.” It was clear that the bigger the challenge the better the Falcons played. The Falcon team was disciplined and physical.  Lehman said, “The game was physical. It was good, clean execution of the game plan that made us successful.” The Falcons changed history as they beat the Red Devils 42-9. This was a very important region victory for the Falcons as they are now one game closer to a region 8 championship. The Falcons take on the Maple Mountain Golden Eagles October 11 at Skyridge High School.