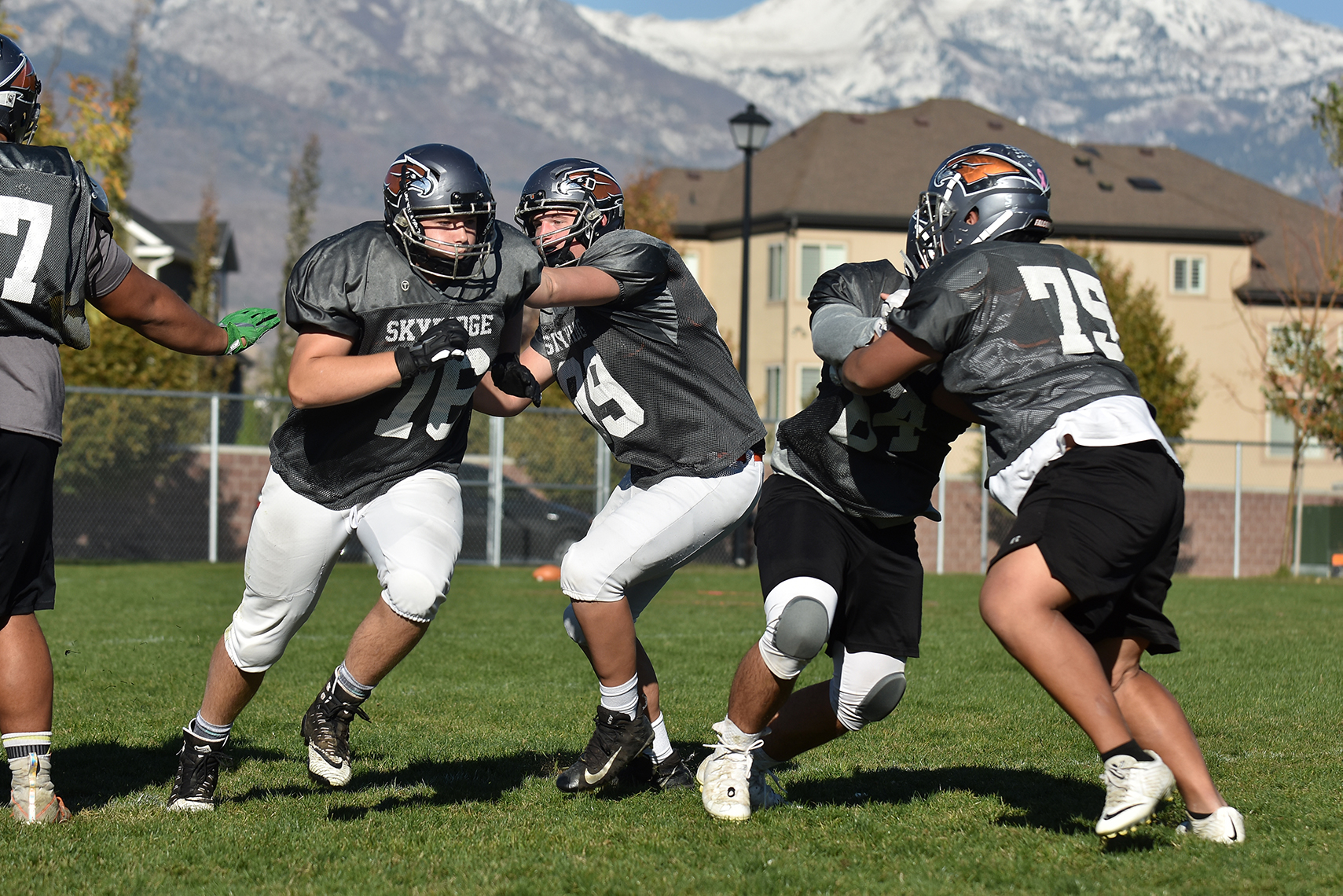 There was an important factor on the game line as the Skyridge Falcons took on Maple Mountain last Thursday, October 11; the winner could determine a Region 8 championship. Although the regular season play has another week, Skyridge has an undefeated region record and another victory would deem them a first seed in the state playoffs. The Skyridge Falcons felt the importance of this big game and ran onto the field energized.

The Falcon domination began defensively when Nathan Upham intercepted the Maple Mountain Golden Eagles. The Falcon defense set the tone with its physicality and hindered the Golden Eagle offense at every turn.

The Falcon offense was forceful as quarterback Jayden Clemons quickly connected with Upham on a 13-yard catch leading to a touchdown by Ma’a Notoa on a 1-yard dive into the end zone. Connor Harris was successful with the PAT and the Falcons had an early lead. Another touchdown run by Notoa put them ahead by 14 points to end the first quarter. The Falcon offense and Clemons kept the energy during the second quarter. Clemons had two rushes for 28 and 20 yards respectively, and capped off the drive with an 11-yard touchdown pass to Upham. Notoa scored again late in the second quarter on a 2-yard run. Ty Arrington intercepted a Golden Eagle pass leading to a 39-yard field goal by Harris that pushed the Falcon lead to 31-0 at the half. The Falcon crowd was spirited and loud as they celebrated the score.

The energized Falcons exhausted the Golden Eagles during the third quarter of the game. Junior quarterback Emmett Call scored on a keep for a 15-yard touchdown. The Falcons maintained the lead with 38 points at the end of the third quarter.

“We were able to move the ball well and the offense was methodical,” said Skyridge Head Coach, Jon Lehman. “We got a good lead that was too much for Maple Mountain.”

Jesse Harness was a bright light on an otherwise dismal night for the visiting Golden Eagles. In the fourth quarter Harness connected with quarterback Tyler Nelson, for a 4-yard touchdown catch and later had a 1-yard rushing touchdown to lead the Golden Eagles offensive effort. The game ended with a 38-13 victory for the Falcons.

With the win and loss by Wasatch and Springville respectively, Skyridge secured the Region 8 Championship. Coach Lehman said, “It was our execution and effort that led us to a win. We beat them down solid across the board.”

When asked about the win, Falcon receiver Ty Arrington said, “We had energy. We won the battle with the first snap.” Falcon safety, Jaxon Peck said, “We were working hard the whole game for a region championship.”

The vigor and hard work of the Falcons paid off with an important region victory.  The Falcons take on the Wasatch Wasps at home for their final regular season game on Wednesday, October 17.

Pioneers blow out Spartans, triumph on the road