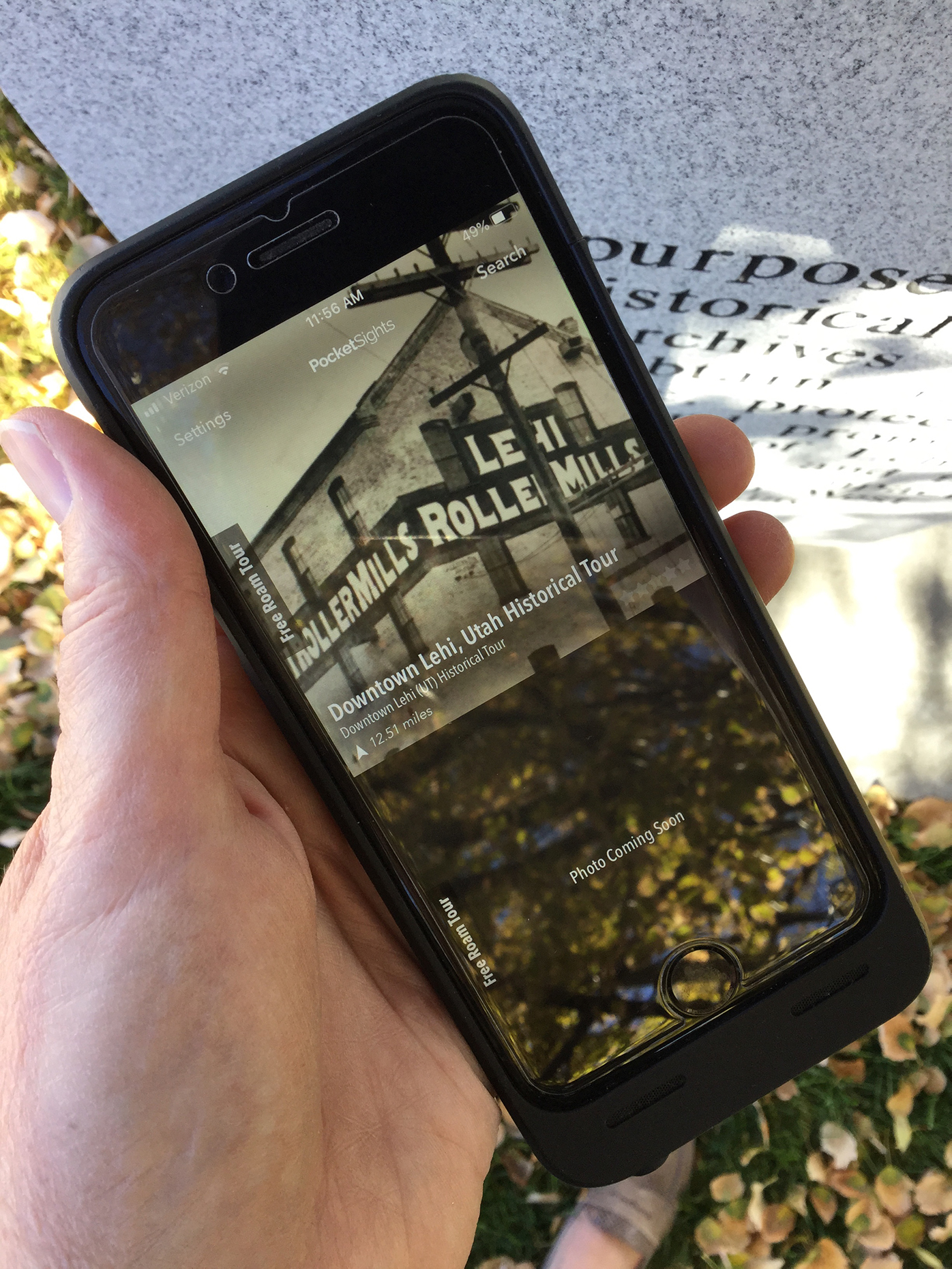 Have you ever wondered about the history of the older buildings in Lehi? Ever had the desire to reminisce or need a clever way to teach your children, or even Cub Scouts, about the city they call home?

There is a newly launched historical tour app to the rescue. As simple to access as a few clicks on your cell phone, the free app gives its users 16 historic sites in Lehi to visit as well as historic photos to view and informative documentation.

The app comes courtesy of The Lehi Historical Society and Archives and thanks to Bryant Gunnell, a local Boy Scout. After helping with numerous other Eagle Scout projects, Gunnell said, “I wanted to do something new—something everyone is into.”

Gunnell’s mother suggested a Lehi scavenger hunt, but after consulting with the Archives and finding PocketSights, an app which facilitates the building of self-guided walking tours for mobile users, and who was willing to sponsor the project, a walking tour was settled upon for his Eagle project.

“Now with the help of Bryant’s simple app, anyone with a phone can take a meaningful tour of downtown Lehi,” said Lara Bangerter, Director of The Lehi Historical Society and Archives. “We are so pleased that Bryant chose this project to help better our community.”

The tour is 2.6 miles long, is expected to take one and a half hours to walk, and includes 16 stops, like the old Lehi Hospital, the Smuin Dance Hall, the old Lehi High School and the first meetinghouse in Lehi for The Church of Jesus Christ of Latter-day Saints. The app includes GPS guidance for walking and driving.

To access the Downtown Lehi, Utah, Historical Tour, download the free PocketSights app from the App Store. If you are in the area, the Lehi tour will pop up as your first option as the app brings up the tours closest to the phone being used. Otherwise, you will have to search for the, “Downtown Lehi, Utah, Historical Tour.” From there, click on the tour to begin. Scroll down to review the sites. Click on the locations for driving instructions as well as to see pictures and learn more.

“Lehi history fascinates me,” said Bryant Gunnell. “I hope others are interested in it and will like Lehi as much as me.”

Gunnell’s father, Kurt, who works with data at Western Governor’s University, helped his son with the project. “This app makes history real to people now,” said Kurt. “Lehi has great history and this app makes it more accessible to young kids.” Homeschoolers, charter schools, Cub Scouts and youth groups will find a wealth of information in the walking tour.

While working on this project, Kurt was delighted to find that his dad’s great-great-grandfather lived for a short time in Lehi before moving to Cedar Valley and then to Cache Valley. “I just think retracing the steps of Lehi’s history with your phone is a great way to bring history into the twenty-first century,” said Kurt Gunnell.

Part of the criteria for an Eagle project is to use the boys in your troop to complete the project. Gunnell’s troop helped summarize information and find fun facts, was consulted about the design of the app and helped with testing. Bryant also worked closely with the Archives for information and photos.

The Downtown Lehi, Utah, Historical Tour made its debut on Labor Day at Lehi Heritage Day at the Legacy Center. Bryant presented his app to guests who were eager to reminisce and check out this exciting new way to learn about Lehi’s great history.

Bryant plans to maintain the site in the coming years, and the hope is to add more stops from time to time.

For more information about the tour or the history of Lehi, check out The Lehi Historical Society and Archives at 34 E. 100 North on Tuesdays, Wednesdays, and Thursdays from noon-5 p.m., and at 801-768-1570 or LehiHistory.com.