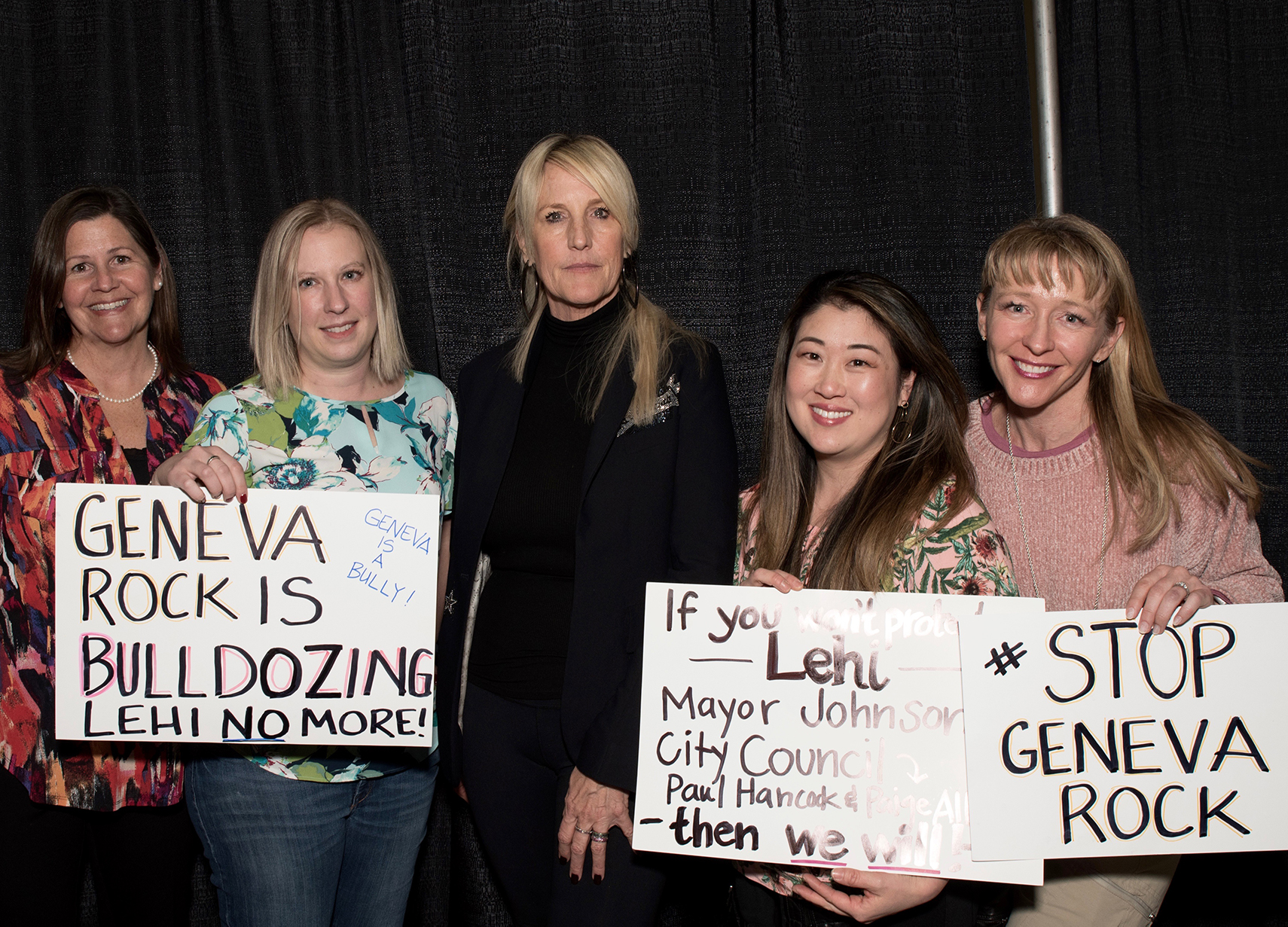 According to a press release, Utah Moms for Clean Air, along with Lehi Moms and Allies for Clean Air, met with environmental lawyer, Erin Brockovich in early March. They met to deliver and discuss a portfolio of research regarding the Geneva Rock and Perry Home’s controversial TMTH mine expansion in Lehi. The release said, “Ms. Brockovich expressed concern about the health risks associated with a mine hovering so close to schools and a residential area.” Health issues which concern the groups include dangerous exposure levels to radon, arsenic, and crystalline silica among other toxic elements.

Lehi Moms and Allies for Clean Air co-founder, Erin Faraclas, is particularly concerned about the proposed mine being within the HOA of Traverse Mountain located within 50 feet of some backyards where children play.

Cherise Udell, Founder of Utah Moms for Clean Air, is astonished the City of Lehi and Mayor Johnson would brush off the importance of evaluating the risks associated with this mine, before green-lighting the plan. “Draper City was concerned enough about the health impacts on their citizens that they voted unanimously last fall to restrict future expansion of mining operations within Draper City limits.” Udell added, “The Lehi City Council oddly and inexplicably has decided instead to do the opposite, and even sent out a letter to residents saying mining is safe for Lehi’s citizens. Frankly, that seems to set Lehi City up for a lot of potential liability because the medical literature is very clear that mining activities do pose substantial health risks to communities.”

During their meeting with Erin Brockovich, the famous environmental lawyer introduced the group to her new website and database, CommunityHealthBook.com. This nation-wide self-reporting database is designed to let people tell their story. Brockovich said she will use information supplied by citizens to identify new battles she can help with. “We are calling upon Lehi citizens to log-in to this database and start reporting cancers, neurological disorders, asthma, and other diseases so we can get a better picture of what is happening in Lehi,” said Lehi Moms and Allies for Clean Air co-founder, Kelly Dyches.

Utah Moms for Clean Air and Lehi Moms and Allies for Clean Air, with support from Erin Brockovich, are calling upon Lehi City to put a hold on the TMTH mine until both the EIS and Health Study can be completed.

Dyches said, “We are bringing lots of individual efforts together to make a bigger impact.” Co-founder of Lehi Moms and Allies for Clean Air, Angie Parkin, said, “We are on a mission to protect our children and community, we believe clean air is a birthright for all.”

Dyches added, “People sometimes think there is not much they can do when they see a problem. Erin Brockovich taught us that one person can make a difference. So, imagine what can happen when we work together.”