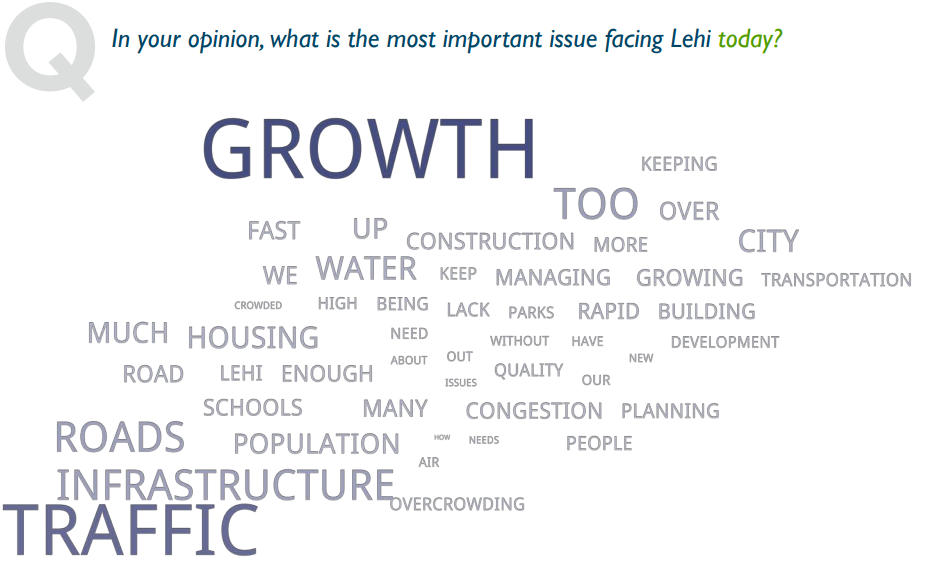 Growth and traffic continue to be major areas of concern for the 1,274 Lehi residents who responded to an emailed survey sponsored by Lehi City in January. These issues have been named consistently in survey results over the past several years. Residents responded to questions about city government, programs and services, growth and development, and open-ended questions as well. Y2 Analytics, a Salt Lake City-based research firm, conducted the survey.

Those polled were sampled from a list of Lehi City utilities customers, registered Lehi voters, and Lehi Legacy Center users. The data were weighted to reflect the demographics of Lehi City according to U.S. Census data from the American Community Survey, specifically regarding age, gender, marital status, and home ownership.

According to an overview of the survey which was presented to City leaders in City Council in March:

Nearly 80% of the respondents feel Lehi City is growing too quickly. Regarding types of growth within the City, the presentation given to officials summarized, “On average, residents feel there is not quite enough green space or recreational development, about the right amount of retail/mixed-use development, and a bit too much commercial and housing development.”

An overwhelming majority of respondents said they are likely to recommend Lehi to others as a good place to live. However, the likelihood to recommend has also trended downward over the past four years. When questioned about public safety, 88% said they “feel safe” living in Lehi, down from 92% in 2018.

In terms of rating Lehi City services, the fire and EMS department ranked highest in satisfaction and the development permitting services were ranked the lowest. In the open-ended part of the survey, several respondents requested a “back button” be added to the survey so they could go back and alter previously answered questions.  Others asked for more specific questions about the City’s course, instead of broad questions like “Do you feel things in Lehi City are going in the right direction or the wrong direction?”

The full results of the survey and a synopsis of the results are available on the Lehi City website under the “Public Relations” tab.