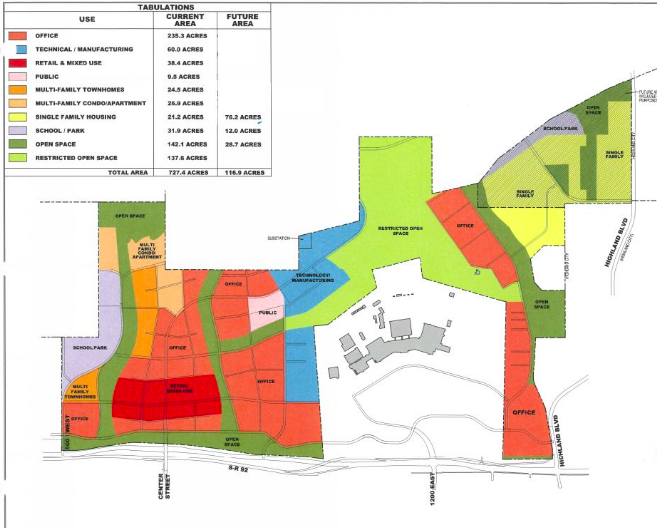 The Lehi City Planning Commission spent more than half of their regular meeting on Thursday, May 13, on DR Horton’s proposed concept plan for 664 acres surrounding the Micron facility. More than a dozen Lehi and Highland residents took their turn at the mic during the public hearing on the agenda item, mostly to object to the plan.

“The original Micron Area Plan included more office space than there is currently in all of Lehi,” said Adam Loser, Vice President of Land Acquisition for DR Horton. Loser went on to briefly explain the vision for the vacant land, that also includes acreage in Draper, Highland and Utah County. DR Horton intends to improve the land for commercial use (several product types including commercial, flex warehouse, office, retail and other uses) and residential homes to be built at an approximate density of three units per acre.

“We’d like this to be a residential master-planned community,” Loser continued. “The predominant amenity will be the trails. This will be a mecca for trails.” He mentioned adding clubhouses and an 18-acre park in addition to all the trails, adding up to the required ten percent of open space. The Development Review Committee (DRC) and many residents noticed, however, that some of the open space in DR Horton’s concept includes retention/detention areas.

“I have a hard time seeing this as an amendment to the Micron Area Plan when it is so drastically different. The density is doubled, the open space is laughable. DR Horton’s proposal does not follow Lehi’s best practices. You can’t count a retention space at the bottom of a hill next to a highway as park space. It’s not safe and it’s not usable,” said Lehi resident Lindsey Gayman.

Several more residents of Lehi and Highland, including half a dozen people who moved to the east side of Lehi from the Cranberry Farms neighborhood, objected to the lack of parks and the development negatively affecting the elk herd that migrates through the Micron property now.

Eight residents who came to the meeting spoke positively about the DR Horton concept plan. “The market is crazy right now. There’s not enough housing for everyone. This is a good plan and I think we should support it,” said Jennica Nielson, a resident of Highland.

“I want people, especially my children, to be able to live here. All the building and development surrounding Micron has already affected the wildlife,” said Justin Pardue, also of Highland.

“Growth is inevitable, and DR Horton does a great job with their communities,” added Kip Jensen, a Lehi resident.

“We researched and confirmed with the city that the space behind us was zoned for a park. There needs to be more open space and I would love to see a buffer between us and the active community,” said Teresa Park. DR Horton’s concept includes an active adult community with higher density condos next to an established neighborhood.

After two hours of public hearing, Adam Loser addressed the commissioners again. “I want to live here and retire here. This is the first step in the process and things are going to change,” he said.

The commissioners and Lehi City staff went on to discuss infrastructure, especially the availability of water for the future development. DR Horton has 90% of the water rights they need, and Loser mentioned installing a water tank for the area. Ross Dinsdale, Lehi City engineer, explained that the city has been looking into different solutions to provide water, including an aqueduct along SR 92.

“I agree with a lot of DR Horton’s plan, but the lack of open space is a concern. It should be usable space, not on a slope or close to a freeway,” said Abram Nielsen, Planning Commission Chair. “There should be a way to be a little more responsible with usable, contiguous space instead of using remnants to add up to the ten percent. In some respects, we’re being failed by the code and the City when it comes to parks. We’re also failing ourselves as citizens because we vote down every bond that comes up for additional parks.”

The Parks Department recommended conducting an acreage analysis on the Micron property and the northeast portion of Lehi, specifically an amenity distribution analysis of the area. “That might help us decide what kind of park needs to go in this location to meet the needs of the community before any approvals are given,” said Jason Bond from the Lehi City Parks Department.

“We can’t just wish great parks and they’re going to appear. If we require DR Horton to put in a park, that will jack up the prices of the homes they build. They’ve got to consider the bottom line. Their goal is to make money. There are legal rights here – we can’t just wish them away,” said Commissioner Greg Jackson.

“We’re considering a concept plan tonight, not an amendment to the Area Plan yet. If we recommend this, though, it goes a long way toward them getting approval on an amendment later,” noted Commissioner Brent Everett.

The following items were given approval or positive recommendations going forward to City Council at the May 13 Planning Commission meeting:

Innovation Pointe’s request for approval of a site plan at 1355 West Innovation Way.