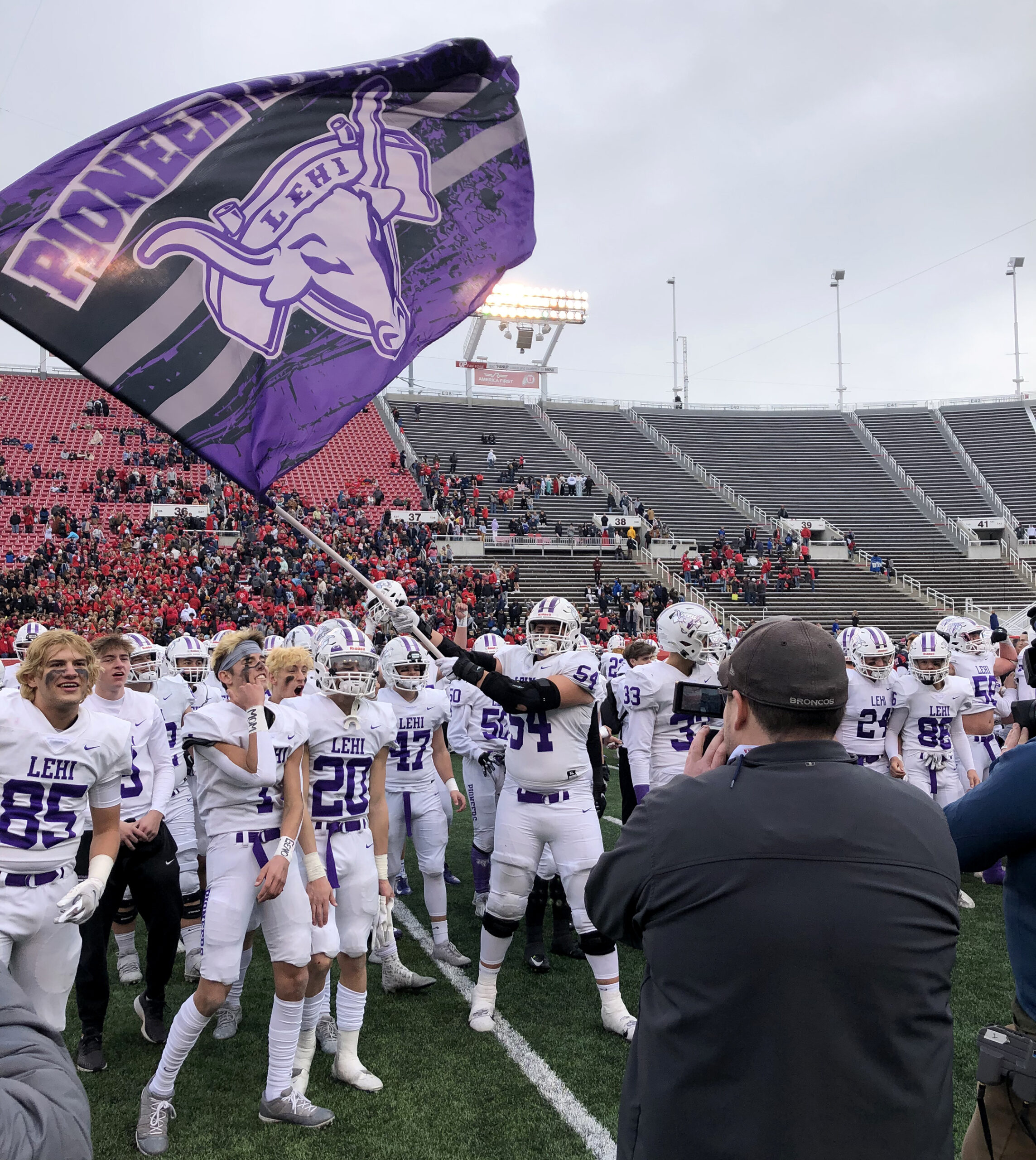 Cinderella made it to the dance and waltzed away with first prize.

At the start of the 5A state football tournament, none of the “experts” picked Lehi as the team to beat, but the #7 Pioneers successfully took out #10 Wasatch, #2 Timpview, #3 Stansburyand finally #1 Springville 35-6 on Friday afternoon (Nov. 19) to capture the coveted gold trophy at Rice-Eccles Stadium.

“I’m numb from the (water jug) shower and numb from the victory,” said Lehi head coach Ed Larson. “It’s a fantastic feeling. We got what we wanted from the football part, but most important was what we saw in the development of the young men. That’s what I’m the most proud of.”

With good reason, never mind the crop of shaggy blond locks not quite hidden beneath the helmets – a symbol of team solidarity.

As they have in most games this season, the defense started hot and held the ship steady until the offense clicked into gear. After that it was full steam ahead both ways until the final whistle.

The Pioneers won the toss and elected to defer, so the Red Devils got the ball first. During this initial possession, Springville was whistled twice for false starts, which continued to plague them throughout the contest. They couldn’t get anything else going either and had to punt.

Junior Kadiyon Sweat returned the kick to the Springville 41, but the boost in field position was nullified when Lehi turned the ball back on downs at the 39-yard-line. The next two exchanges were similarly fruitless.

The Devils were attempting to move the ball in their own end when their quarterback’s pass was intercepted by seniordefensive back River Moore and returned 32 yards for the score. The PAT by senior Zane Goodrich gave the Pioneers a 7-0 lead at the 5:09 mark of the first quarter.

They never trailed. Springville’s next drive was ended in the same way, as junior defensive back Hank Griffin made the pick this time. The ball was positioned at the Lehi 8 following a penalty.

On first down, junior running back Carson Gonzalez broke a 90-yard run but was caught from behind at the Springville 2-yard line. It was the fifth-longest rush in state title game history and the longest non-scoring effort.

Three plays later, junior quarterback Jackson Brousseau tossed to senior wide receiver Jaxon Christensen for the touchdown, officially one yard. The Goodrich PAT made it 14-0 at the 9:49 mark of the second period.

This time the Devils answered with a solid drive, mostly on the ground, which ended with a 4-yard rushing tourchdown. The PAT kick missed to the right so the score remained 14-6 with 5:42 left to the break.

The Pioneers then moved methodically down the field themselves, using mostly short and midrange passes to advance the ball. This time the touchdown throw went to senior wide receiver Steele Cooper for 12 yards with 44 seconds on the clock.

It was extra sweet for Cooper, who only found out two days earlier that he would be able to play after missing more than a month with a broken collarbone.

Springville’s final possession of the half was ended with an interception by junior linebacker Hema Katoa as time expired, leaving the score at 21-6.

In the third quarter, the teams traded the ball four times before either of them could gain much ground. The Devils managed to reach the red zone only to have their scoring attempt thwarted by Moore once again, who jumped high to pull in the pass in the end zone.

On second down, Brousseau connected a short throw to junior tight end Boston Bingham, who broke free near midfield and then outran his pursuers 82 yards for the touchdown – the seventh-longest pass play in a title game overall, and the longest since 2003. With the PAT, the gap widened to 28-7.

Springville’s next drive went only backwards. The Devils elected to try and convert a 4th-and-15 deep in their own territory and were stopped for an additional loss at their 18-yard line.

Gonzalez took a quick pass in on the next play, evading a couple of would-be tacklers with his cuts. The PAT capped the tally for the contest at 35-6 with 1:43 remaining in the period.

Springville continued to move the ball but ultimately wasn’t able to do anything with it. The next two Devil drives ended with picks by Sweat and Moore. It was the latter’s third of the game, tying the state record for most individual interceptions in a championship game with marks set in 2015 and 1986.

The final two Springville possessions ended in a punt and the expiration of the clock as Lehi’s players rushed to the middle of the field and celebrated their huge upset victory.

“This is the result you strive for all season,” Larson said. “In a way, this game was a microcosm of our year. Our defense played lights out at the start while our offense was sputtering and then kept the pressure on to close things out.”

Brousseau finished making 13-of-26 passes for 188 yards and four touchdowns, tying for fifth-most in title games. Gonzalez rushed eight times for 133 yards and had 154 yards overall.

Moore finished with eight tackles, including six solo, to go with his three interceptions. Junior defensive end Isaac Terrell and Katoa had nine combined tackles each, and senior linebacker Tristan Royce had eight. The defensive unit as a whole had 83 combined tackles compared to 53 for Springville.

The Pioneers also set a new championship-game state record for sacks with nine. “Those sacks indicated the pressure we wanted to bring,” Larson said. “Also, our linebackers stopped their run game, which has been their forte all year. Those were two of the keys for us today.”

The coach added that the team had practiced well all week after what he considered to be a sub-par performance in the semifinal. “It was exciting for us as coaches to see them go out and do what we knew they were capable of. It was just awesome,” Larson concluded.

For two of the senior wide receivers, it was an emotional conclusion to their high school careers. “This is amazing,” said Isaac Dayley. “It couldn’t have ended any better. From the beginning we worked so hard, in the summer and in the weight room. We knew we could beat anyone if we did our best.

“Championships are won by players, not coaches,” he added. “We wanted it as brothers, and we worked together until we got it.”

Christensen agreed that the team came together early in the pursuit of this goal. “It was our main thing from the start,” he said. “We went to leadership camp with a military guy and did exercises with our brothers which brought us closer together.”

The team’s success this season also rested in the hands of a stable of receivers and Christensen said position coach Cole Cooper kept aiming their sights high. “He would tell us, ‘keep climbing the mountain,’” the player said.

“We were proud of each other and knew we couldn’t get this done alone,” Christensen added. “We needed everyone, and together we’re going out with a win. Only six teams in the state can say that, and that’s the perfect way to end.”