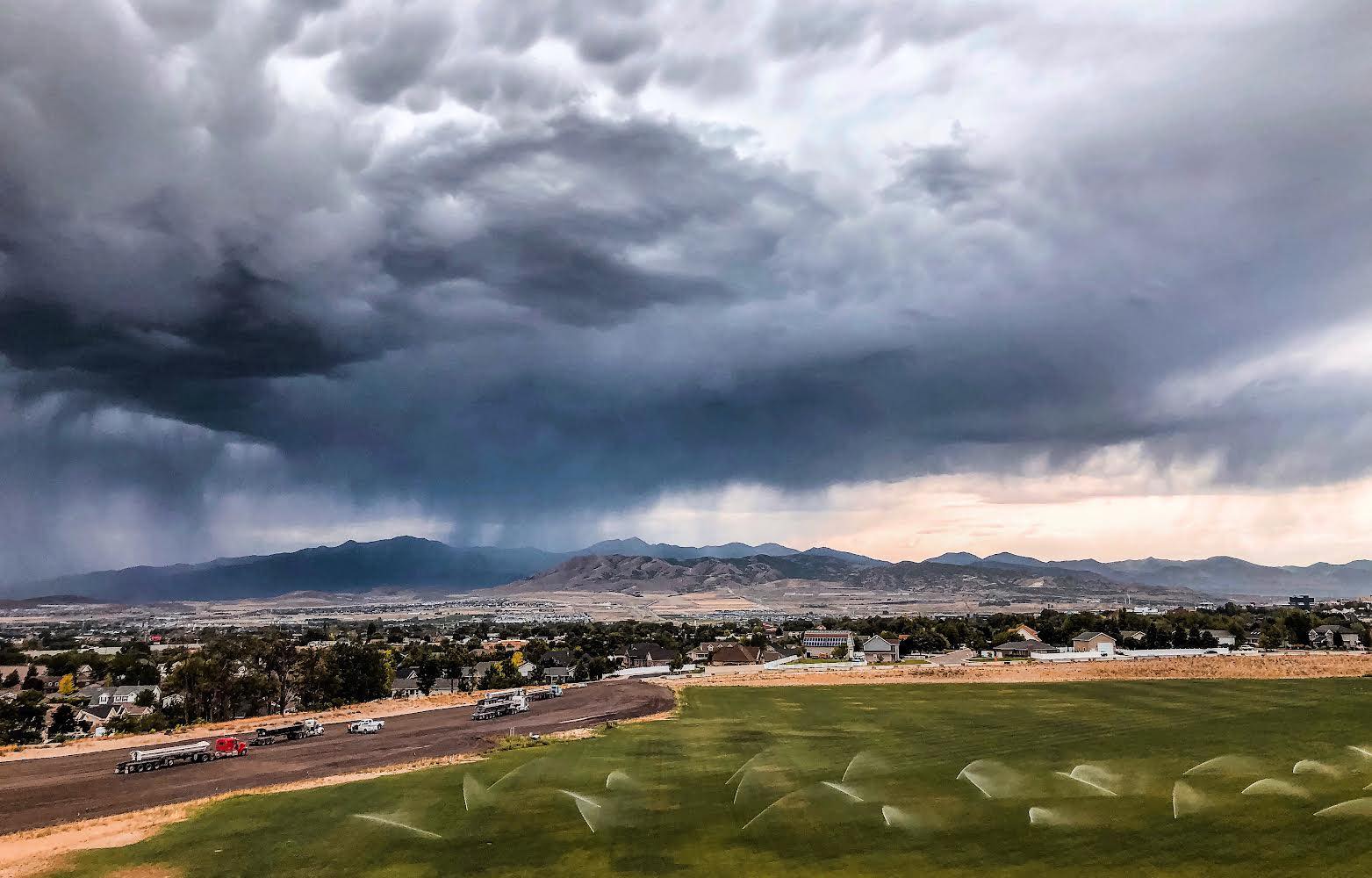 The Lehi City Planning Commission gave two agenda items negative recommendations at their April 28 meeting. The items will now move to City Council consideration. The planning commissioners were unanimous in their rejection of Lehi City’s plan for a nine-lot development on the overlook of Family Park but split the negative vote for a daycare center on 2300 West.

“Who represents the applicant and who represents the City?” asked Commissioner Scott Carlson when the Family Park Estates request was presented. “Because you’re approving the variance to your own application and it’s bothering me. The City is the applicant, and the City receives the revenue. Financially it seems like a potential conflict.”

Planning Commission Chair Abram Nielsen agreed with Carlson. “It probably should have been sold off to a developer and let them go through the process,” he said.

Lehi City Council approved an agreement to acquire the property on 600 East in March 2021. In June 2021, the City Council approved a General Plan Amendment to change the zoning on the property from Public Facility to Low-DensityResidential. The City planned to develop just over three acres into residential lots and use the proceeds from the sale of the property to fund Family Park improvements. In their proposed preliminary subdivision, the City also asked for an exemption to the park strip requirement.

“There are park strips all around this property. It’s kind of a ‘do as we say, not as we do’ situation here. If it can’t be developedwith the required seven-foot park strip, maybe we shouldn’t be developing it,” said Nielsen.

Several neighbors spoke up during the public hearing on the item to express their concerns. “Neighbors have been going there to watch fireworks for years. If you build homes there, you’re taking that away,” said Lehi resident James Lagowski. “If I have to choose between that view and a park, I choose the view.”

Lehi City Development Director Kim Struthers explained that the development of the property was a trade for additional landat Family Park, formerly known as Peck Park.

“I think it’s fair for citizens to ask why we’re still doing this when the PARC tax passed,” said Commissioner Greg Jackson.

“This started quite a bit before that tax was approved. We weren’t sure what the outcome was going to be, and we wanted to make sure we had a way to pay ourselves back for the purchase of that additional land,” Struthers explained. “The City Council has been aware of this, and it has been through a General Plan Amendment and a zone change.”

“Respectfully, I’d say that’s a pretty dumb reason to go forward,” Jackson replied. “If we’re saying we’ve got the means now, but we did some paperwork, so we’re still going to do it.”

“There are many cities that have redevelopment agencies, so it’s not out of the norm for a city to be a developer. The majority ofthe PARC tax is already spoken for. Our mayor said he was going to find creative ways to fund parks, and this is one of the ways he’s doing that,” said Lehi City Engineer Ross Dinsdale.

“I think there’s a misconception that now that we have the PARC tax we can pay for all the parks, but it’s $1.5 million a year and to build out a park is tens of millions of dollars,” added Commissioner Heather Newall. She asked Loren Powell how much money Lehi City will make on the sale of the Family Park Estates lots. Powell estimated just over a million dollars after making improvements to the property.

“I have issues with the justification for why we don’t think we need a park strip. That opens a can of worms with other developers to say they don’t have enough space to do what they want,” said Nielsen. “I get that the mayor was trying to be creative and pay for parks because people didn’t want to pay for it. It’s just over a million dollars and most of that is going back to break even, it’s not going toward improving the park. To me the biggest improvement to this park you could do is to preserve that overlook. I think preserving these unique features is more important than housing.”

“I feel like this would be a decision we’d regret for years to come. I have a hard time seeing this go forward,” added Carlson.

“Things have changed a lot since this first came through. Just because we were creative in this way in the past doesn’t mean we’ve got to stick to it now,” Newall pointed out. “This is part of what could make Family Park great. I think we need to step back and think about what we’d be losing.”

Commissioner Carlson made a motion to give Lehi City’s proposed preliminary subdivision for Family Park Estates at 600 East Airport Drive a negative recommendation to City Council and the motion passed unanimously. Lehi City Council will make the final decision on the proposal in their May 24 meeting.

The Planning Commission also gave a negative recommendation to City Council for Kevin and Sarah Gordon’s request for a zone change on 1.63 acres at 860 North 2300 West from VLDRA (very low density residential) to Neighborhood Commercial. The Gordons are hoping to build a daycare on the property.

A few residents near the proposed daycare objected to having commercial property next door to them. “The General Plan already removed the neighborhood commercial designation that was near this property and not on it. You’re talking about spot zoning,” said Lehi resident Jennalyn Bishop. “There are people who are building homes here that weren’t notified of this potential zone change. Please don’t ruin our neighborhood.”

“Not every city does concepts this way. We shouldn’t have the General Plan amendment and the concept on the same agenda. We’re always told ‘it’s just concept,’ but there’s no way it’s going to be denied after all the time with Lehi City staff and the money they spend on plans,” added another resident Angie Lethbridge.

“I’m sensitive to their concerns and I’m trying to build something that fits with the neighborhood,” Sarah Gordon, the applicant, told the commission. “This is something Lehi needs.”

“It sounds like people have a problem with Ascent Academy – we’re nothing like a big school and it won’t cause the nuisance the way a school does,” added Kevin Gordon.

A few commissioners expressed concerns about creating an island of commercial zoning amid residential zones. “I love Neighborhood Commercial zoning and I wish we had more of it, but I don’t think this is the right place for that opportunity,” said Commissioner Tyson Eyre.

“Someone is going to have hurt feelings here, that’s how this stuff goes. I don’t mean to sound callous, it’s just the reality of what we do every single meeting,” said Commissioner Jackson. “What it comes down to is trying to follow what’s been said and what is in the best interest of the city. I would say, respectfully, we can’t take emotions into consideration because there areemotions on both sides. What is best for Lehi 10-20 years from now?”

“Essentially we have an island whether we want one or not. It is there. We’re either going to end up with a bunch of townhomes with someone requesting a different zone change and we’ll think, ‘Oh, it’s residential, the citizens will be happier.’ Or, we can serve the community with a childcare center that’s desperately needed, that can serve the neighborhood around it, that’s right next to a public school off a future five-lane road,” said Commissioner Emily Britton.

Commissioner Scott Carlson asked Commission Chair Abram Nielsen to give a negative recommendation to the Gordon’s request. “I’m concerned about each step of the process here,” he said.

The motion to give a negative recommendation to Kevin and Sarah Gordon’s request for a zone change at 860 North 2300 West passed with Commissioner Britton and Commissioner Scott Bunker dissenting. The Gordon’s subsequent request for approval of their Childcare Center concept was unanimously denied by the Planning Commission.