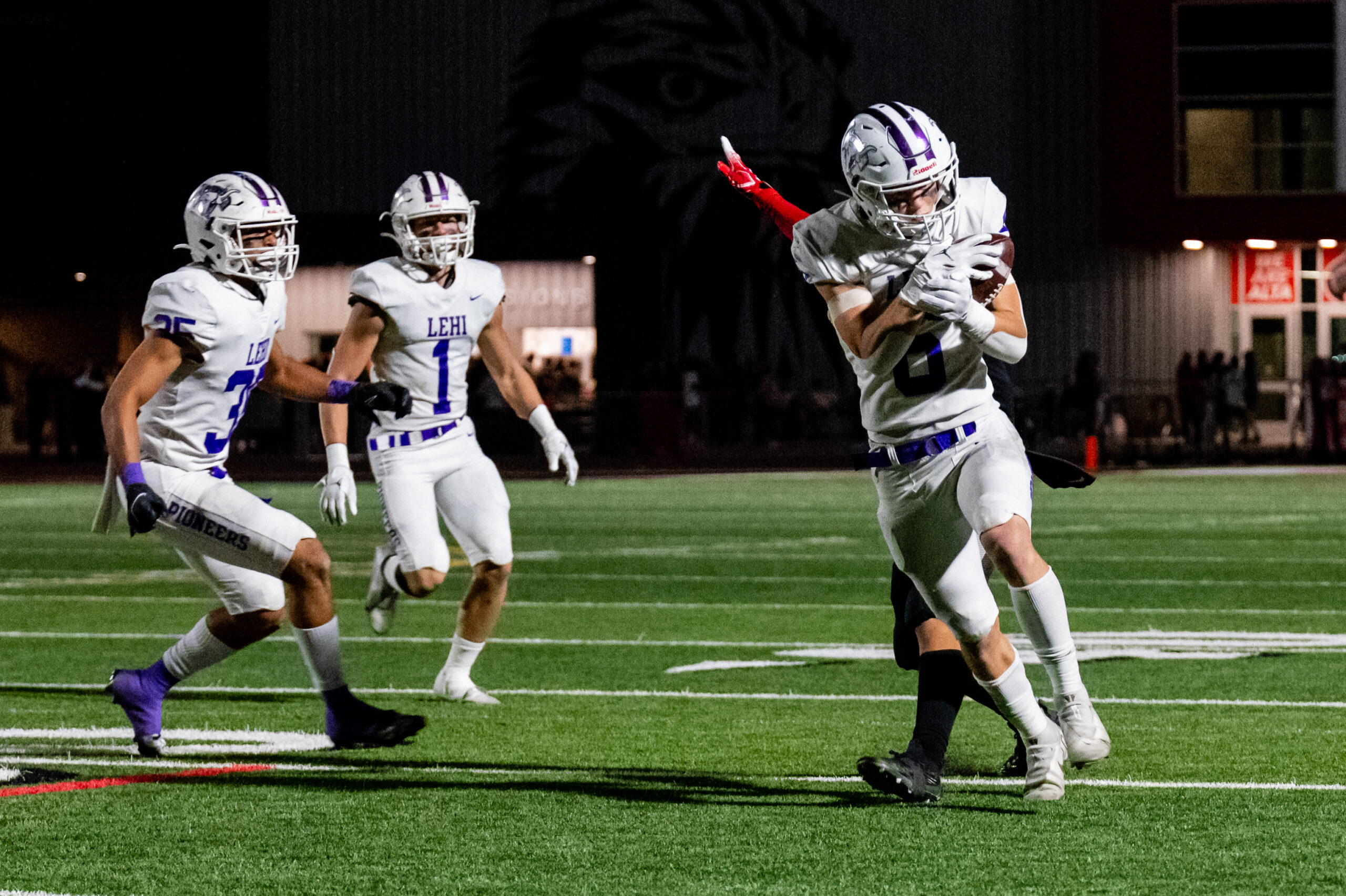 It wasn’t easy and it wasn’t pretty, but the Lehi football team prevailed 20-0 in a taut Region 8 fight on the road Friday (Sept. 30) over the Hawks.

Alta received the kickoff but threw an interception to junior defensive back Kenneth Latu on the third play from scrimmage and the Pioneers were in business on the Hawk 26.

They got a first down after a 5-yard rush by senior running back Carson Gonzalez followed by a toss of the same length from senior quarterback Jackson Brousseau to senior tight end Makafefie Havea to reach the 16-yard line.

However, a pass attempt on the next play was picked off by Alta at the goal line and the Hawks took over at their own 6. They were able to make some movement down the field, but then a bad snap caused a fumble, and the ball was recovered by senior defensive end Camden Williamson at the Lehi 39.

This time the Pioneers made good on the possession. The drive included key catches by junior wide receiver Jace John and senior tight end Boston Bingham before Gonzalez took it across from the 1-yard line.

Nate Shepherd’s PAT gave his team a 7-0 lead at the 8:38 mark of the second quarter. It was an advantage they never relinquished, but they had to earn it.

The teams traded the ball after fruitless possessions for the rest of the half.

Lehi got the rock to start the third quarter and chewed up nearly seven minutes of game time as they mounted a drive hampered repeatedly by penalties.

A solid effort by the Alta defense forced the Pioneers to settle for a 30-yard field goal by sophomore kicker Gavin Fenn with 5:11 left in the period.

The teams subsequently exchanged punts again. On the next Hawk possession with a 3rd-and-12 on the table, senior defensive back Nathan Anderegg made a pick and returned it 30 yards for the score. Shepherd’s kick pushed the margin to 17-0 with 52 seconds left in the period.

Alta made a couple of first downs on their next possession, but the Hawks failed to convert on a 4th-and-2 and turned the ball over on downs at the Lehi 26.

Using mostly short plays of both kinds, the Pioneers moved methodically down the field as they took time off the clock. A 29-yard reception by junior Kolose Latu positioned the ball at the 1-yard line.

Gonzalez pushed to the 1-foot mark, but a sack and an incomplete pass brought the field-goal team back out and Shepherd split the uprights from 23 yards out to make it 20-0 with 2:30 remaining to complete Lehi’s tally for the evening.

The defense held as they had all night, and the Pioneers pocketed an important grind-it-out win in advance of their home date with Timpview on Thursday (Oct. 6) at 7 p.m.