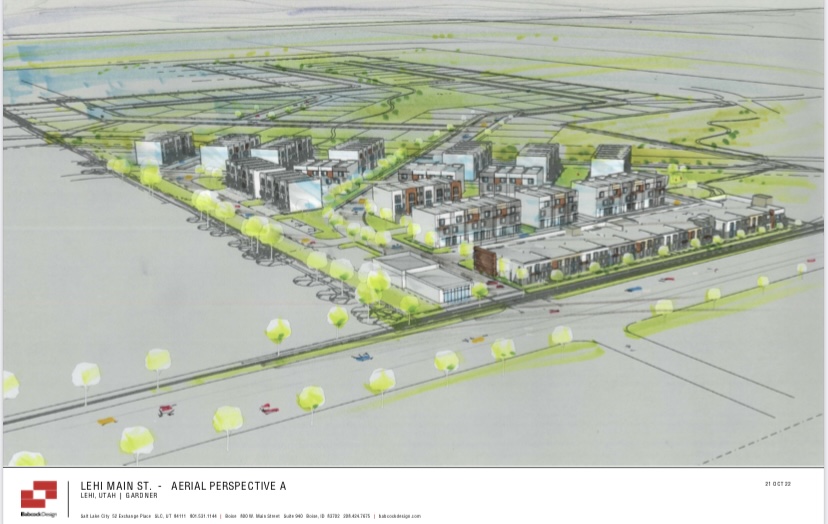 During their five-hour meeting on Nov. 17, the Lehi City Planning Commission heard a proposal for a residential development at 2500 West Main Street. More than a dozen residents objected in person and shared comments online to the proposal to amend the General Plan to change the 50-acre property zoning from VLDRA (very low-density residential) to LDR (low-density residential). After hours of discussion, commissioners voted 4-3 to give the proposal a negative recommendation to the City Council.

“Our general strategy was to create density toward Main Street with the goal of the parcels to the east and Main Street intersection becoming Commercial,” began John Bankhead, representing Gardner-Plumb. “That would open up the opportunity to create a more walkable environment, which matches the city’s goals.”

“My property is just east of the proposed townhomes. It’s agricultural, and we’re not going anywhere,” said Lehi resident Todd Reese. “High density doesn’t fit in at all here. It will significantly alter our way of life – it’s two worlds colliding.”

“During the last major construction on our street, I had to open up my well twice to settle it. This is 100 feet closer – I’m afraid I’m going to lose my well,” added resident Kirk Evans.

Several residents expressed concerns about adding traffic to an already congested area, pointing out that most students who attend Willowcreek Middle School and River Rock Elementary do not have buses right now.

“The City should address the lack of infrastructure before they start building more,” said resident Brent Ivie.

After the public hearing, Bankhead came back to the mic. “I like the idea of putting up an eight-foot concrete wall,” he said. “We’re not married to the entrances and exits as they are now – we’re open to suggestions. If we mess with a farmer’s well, we’ll fix it. We’ll be as good a neighbor as we can be.” Bankhead also pledged to “dig in” and figure out the best solution to traffic concerns with Lehi City staff.

“I’m a strong believer in property rights. Our system would fall apart without property rights. The General Plan is malleable for smaller flexes as needed – I don’t think this is the answer. This is a legislative action. There are no property rights to protect here,” said Commissioner Greg Jackson.

“This may be an unpopular opinion, but I love this plan. We want to spread out density and get it away from 2100 North. This is a well-thought-out plan,” said Commissioner Tyson Eyre.

“I think we’re slowly eroding what the city was founded on,” added Commissioner Brent Everett. “I don’t think this is the place for high density.”

“I’m on the fence. I don’t think this cake was baked long enough to be on the agenda. There are more than 40 DRC comments. They haven’t had any meetings with the neighbors,” began Commission Chair Abram Nielsen. “However, this plan isn’t killing agriculture; it’s preventing sprawl. They’re promoting the vision for Main Street in the most recent General Plan so that Main Street doesn’t just die. Single-family houses cause more traffic problems than townhomes.”

Commissioner Jackson motioned to give the Gardner-Plumb proposal to amend the General Plan a negative recommendation to the Lehi City Council. The vote passed with a vote of 4-3. Commissioners Nielsen, Bunker and Eyre voted against the motion.

The following items were approved or given positive recommendations at the Nov. 17 Planning Commission meeting:

– The Boyer Company’s request for Conditional Use approval of the Holbrook Industrial entrance sign at 4895 West Hudson Way.

– Jamie Barnes’ request to review the Smart Cookies Academy General Plan Amendment, changing the designation from VLDRA (very low-density residential agriculture) to NC (neighborhood commercial) on 2-acres at 1910 West 900 North. (Commissioners Everett and Eyre voted no on the motion to give Barnes’ proposal a favorable recommendation, explaining that they would rather find a way to allow the daycare center without changing the General Plan.)

– Lehi City Water Department’s requests for conditional use approval of two portable storage containers, one at 3050 West Traverse Mountain Blvd and one at 2538 North 300 West.