You Better Believe It—The Lehi Free Press Is Back 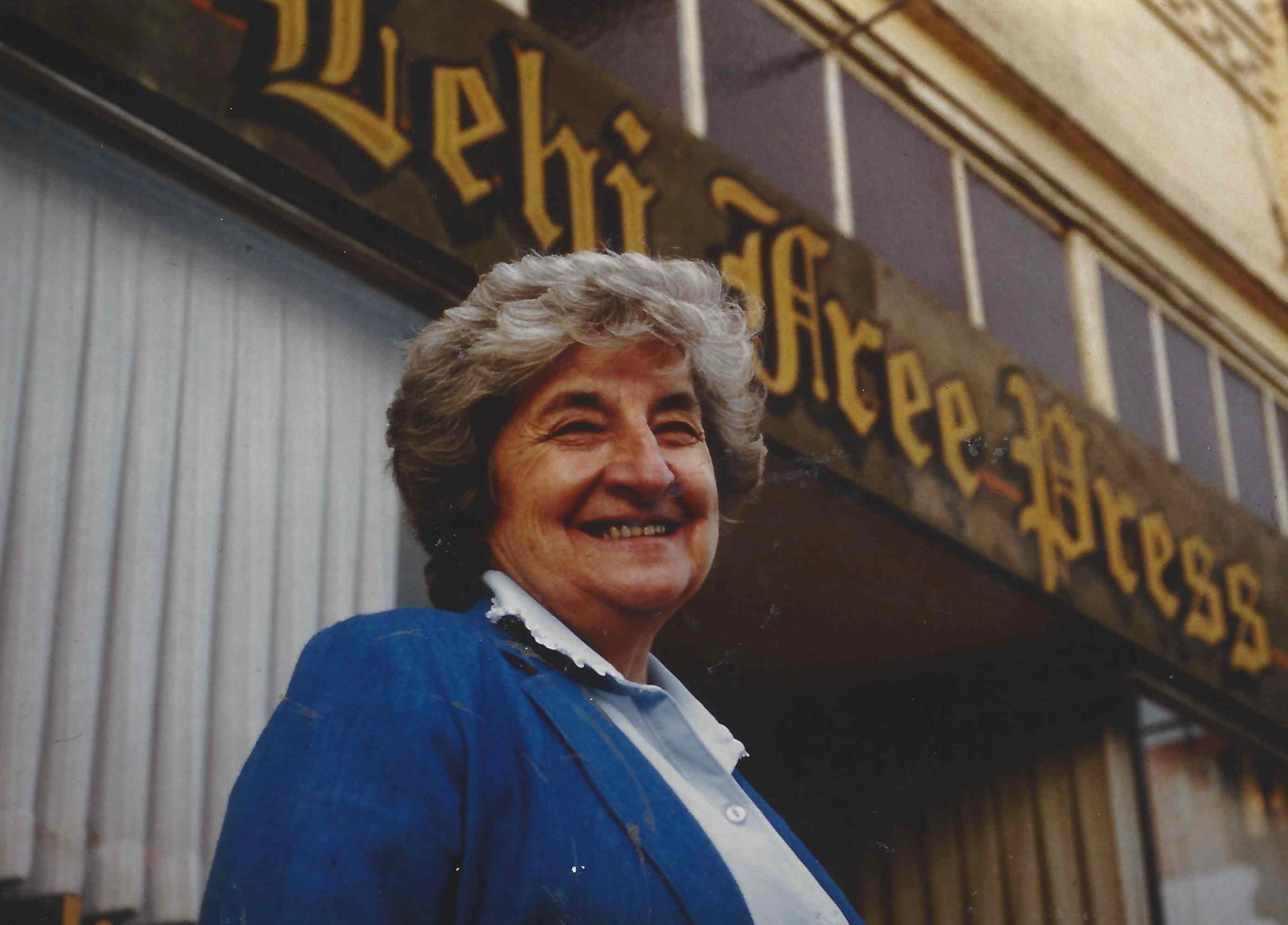 “A newspaper is the chronicle of circulation—the common reservoir which every stream pours its living waters, and at which every man, woman, and child can come and drink freely. It is the newspaper that gives to liberty its practical life, its constant observation, its perpetual vigilance and its unrelaxing activity.” (Lehi Banner, 7 Sept. 1897.)

Lehi’s first newspaper sprung forth out of a need for news and a vehicle for creative minded journalists. In 1867, James Kirkham dashed off by hand Lehi’s first handwritten manuscript newspaper, The Lehi Evening Post. While the manuscript newspapers were undoubtedly entertaining and informative, they also had serious limitations. Copying the papers was laborious and monotonous. In addition to the expense, the production costs could not be underwritten by job work and advertisements. The Lehi Evening Post was discontinued but manuscript editions called The Evening Star and Advocate continued for a short time.
During the spring of 1891, Lehi was bustling with activity. The Utah Sugar Factory was constructing its first factory in town, and prosperity was right around the corner. A newspaper seemed to be in order. The Lehi Publishing Company was formed to publish a newspaper. The James H. Wallis newspaper plant in Nephi was purchased and moved in its entirety to Lehi. Advocating “freedom of religion, liberal and independent politics and home industry,” the inaugural issue of the Lehi Banner rolled off the small cylinder press on 29 May 1891.

In 1894 the circulation of the Lehi Banner was 408. Subscriptions were sometimes paid for with turkeys, potatoes, wood, or promises of payment. Despite delinquent accounts and circulation woes, the Banner was in excellent financial condition at the end of its third year of publication.

Ads in the Banner were often folksy and ungrammatical. But readers, if they noticed these weaknesses, did not fuss about them. Politically, the Banner followed the LDS Churches position on virtually every issue. The Banner followed the Republican Parties views on free speech, home industry, free silver, woman’s suffrage, and protection for Utah’s sugar industry. The paper was criticized for its political leanings. In fact, a letter to the editor from a disgruntled Democrat “denounced the action of our local paper as totally uncharacteristic of an unbiased, non-political sheet and condemns their unwarranted attacks on Democratic principles and officers.”

The ownership of the Banner changed several times in the next 4 years. In June, 1905, James Kirkham leased the publishing company and expanded his publishing capabilities. Kirkham sold the paper to Will Ross who opened an office on 68 West Main. Ross promised to expand the newspaper’s offerings to feature women’s news, agricultural news and pictures of the European War. Even with the newspaper’s expansion the days of the Banner were numbered.
On the morning of 5 August 1914, the day after the Allies declared war against Germany, a new Lehi paper was first published. “The Lehi Sun has risen,” editor Ole Peterson wrote in the first issue. Peterson left the paper after a few months to pursue opportunities in Murray. The Gaisford family, publishing another group of papers in an adjoining office took over the Lehi Sun. The Gaisfords moved their publishing facility to American Fork. Prominent Lehi citizens, irked that their hometown paper was being published in American Fork sought to bring another paper to town. When the Gaisfords realized the importance of having the local paper published locally, they started an independent operation in Lehi: “Commencing with next week’s issue the Lehi Sun goes under entirely new management and will be operated as a strictly Lehi paper, edited by a new editor.” Karl S. Carlton moved to Lehi and with the assistance of George Price the Sun began in January of 1931.

Agitation grew to have another paper in town. Despite the Sun’s efforts to maintain its Lehi roots, the first edition of the Lehi Free Press was published on 25 August, 1933. With two papers in Lehi the competition became intense. In 1933 a lawsuit was filed. The Free Press asserted that the Sun had printed a libelous story. Readership of the two papers increased during this colorful controversy.

The lawsuit was settled out of court with the Free Press being favored. The strained relationship continued for another four years. A.F. Gaisford died and the Sun’s operation was greatly reduced. Ruth Banks became the only employee left in Lehi. She was reporter, editor, and publisher. Mrs. Banks brought interesting day to day events. She wrote, “Having troubles? Tell ’em to your husband—unless they are news—then tell them to the Sun.” Faced with the overwhelming difficulties of trying to raise a family while publishing a newspaper, Mrs. Banks decided to retire from the Sun. Margaret McMillan was hired as the editor in the spring of 1948.

For thirteen years, George Price with his wife, Nadia, had worked together to publish the Free Press. They sold it to partners William Adamson, John Leyland, and J.P Heal in April of 1946. Three months later Heal bought out his partners and later included E. Russell Innes. In 1949, the Sun bid adieu and their operation was consolidated with the Free Press with Innes as publisher. In 1951 Innes’ staff included: Josephine Zimmerman, general news writer, Lance Gudmundsen, printer’s devil, Clovis Hill, sports and feature writer; Larry Erickson, pressman, printer; LaMar Wright, compositor, pressman, advertiser; George Price, Intertype operator; and Blake Spencer, Rel Brown, and Arnold Cardon, newspaper folders.
Innes expanded his publishing business by purchasing Alpine Publishing. During this time, Innes switched from the hot metal to the offset method of printing. Innes was awarded the highest award by the Utah Press Association, “Master Editor and Publisher.” After forty-four years Innes retired and his son-in-law, Kip Peterson acquired the operation. The newspaper was sold to Newtah, Inc., a new Utah corporation, in 1979 and Betty Fowler was named editor of the Lehi Free Press. In 1989 the office was relocated to 86 West Main to share quarters with Laney Circus Video.

Fowler, a popular columnist, humorist, and rabid sports fan, replaced long-time Lehi newspaperwoman Margaret Macmillan. Lehi citizens looked forward to Fowler’s column, “You Better Believe It.” One never knew if their name would turn up in the column. Fowler retired in 1996 and Russ Daly became the editor. Newtah Publishing was bought by Pulitzer publishing and became part of the Daily Herald and in 2002, the three papers published by the Daily Herald/Pulitzer Publishing: Lehi Free Press, American Fork Citizen, and Pleasant Grove Review, were discontinued.

Lehi has been without a local newspaper for almost ten years.

It is the hope of the publishers that the same local flavor will permeate the pages of this paper as in the past and that its pages will chronicle the truth and give thought and commentary to all that is interesting and important to Lehi and its citizens.

(The historical information is from Richard Van Wagoner’s book: Lehi, Portraits of a Utah Town, 1990)