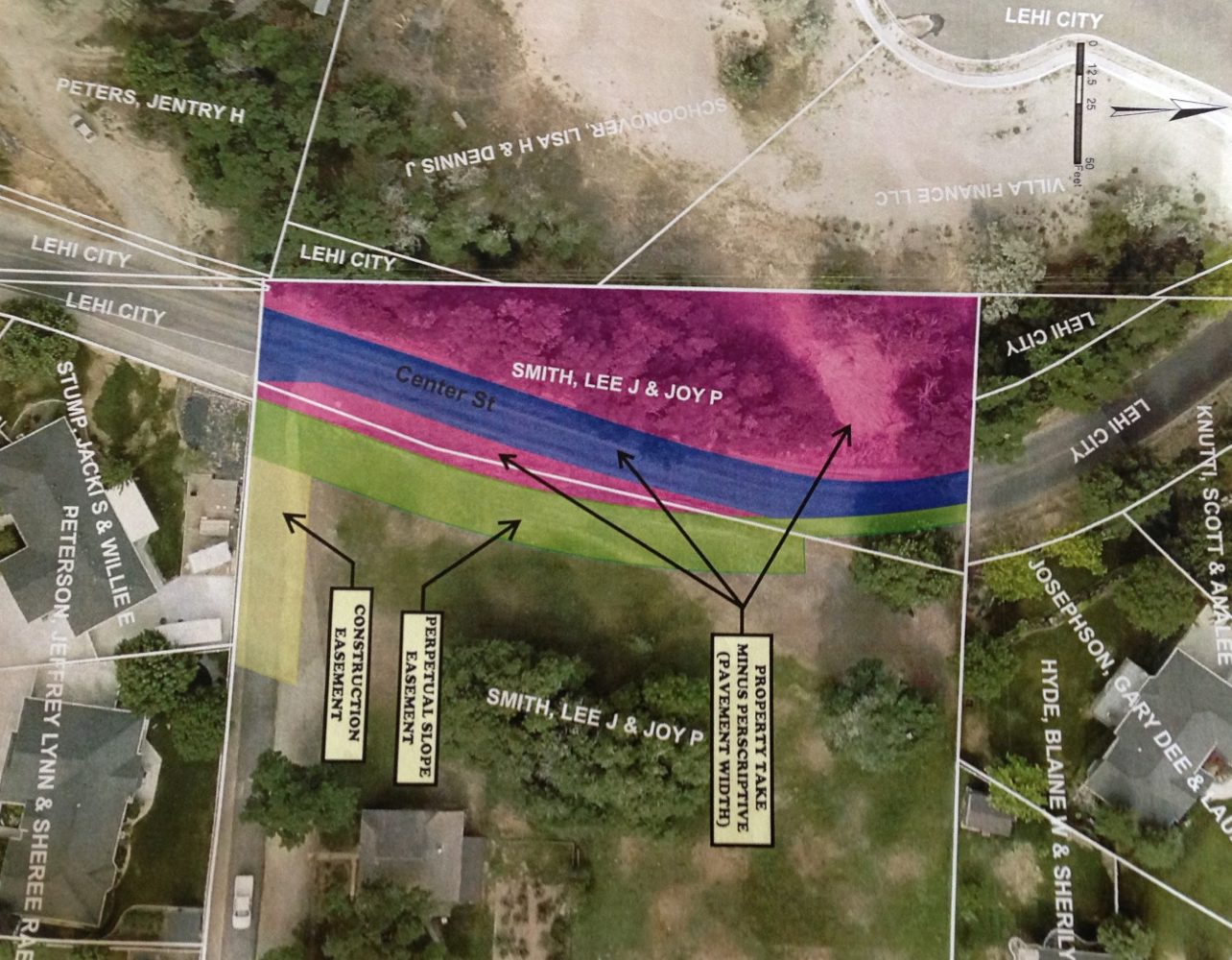 Late in the city council meeting on May 24th, approval was given to begin the condemnation of Lee Smith’s property to widen and straighten Center Street at approximately 2300 north. The Center Street road is a major thoroughfare to the new high school. The approval to condemn came in a 4-1 vote; Chris Condie voted to deny approval.

In an interview with Mr. Smith, details emerged concerning the eminent domain classification of about a ½ acre of his property. (Eminent domain is the power given to government agencies to acquire private property to exercise functions of public character, following the payment of just compensation to the owner of the property.) According to Mr. Smith, Mayor Bert Wilson approached him about 3 ½ years ago to begin negotiations on acquiring land to widen the road. Mr. Smith owns land on both the east and west side of the road. At that time, Mr. Smith offered to donate land on the west side of Center Street to straighten the dangerous curve in the road. It was estimated that to accommodate the widening of the road on the west side it would cost about $170,000 to fill in the drop off. Time went on and negotiations stalled. Mr. Smith commented that housing development began shortly after the first discussion on land adjacent to his on the west side of the road.

In the past year, as the completion of the new Skyridge High School became imminent, Mr. Smith was served condemnation notice in the spring of this year by Lehi city on his property to the east of Center Street. The plans involved digging away a hill adjacent to his home to widen the road, install curb and gutter, and a sidewalk. The city’s plan would also alter the driveway into Mr. Smith’s home. Mr. Smith is adamant that the city not proceed with their plan to take his land. He goes on to say, that he has been given several different plans. “The city has not negotiated in good faith, and has manipulated the facts to suit their desire to take my land,” said Smith, who has hired legal counsel. Because of the delay in the city’s negotiations, the cost they anticipate exceeds the $170,000 it would have originally cost the city to straighten the road three years ago, according to Smith.

The Smith land is part of a 120 acre homestead that Mr. Smiths’s great grandfather, Joseph Johnson Smith, pioneered to provide for his 19 children. Mr. Smith revealed that Center Street was actually constructed by his great grandfather as a way to get to and from his sawmill at the base of the hill. Through prescriptive rights the road eventually became the city’s. The Lee home presently sits on the remaining 3 acres of the Smith homestead.

In response to a question to the city about the number of plans having been given to Mr. Smith, the city replied, “Many different alignments for the roadway have been considered. The City has determined that this alignment is the best alternative in regard to construction, safety and cost. Though the proposed roadway is being moved significantly west and will still have some curves, it has been designed to meet the standards set forth by the American Association of State Highway and Transportation Officials.”

Negotiations on a resolution are continuing between Lehi City and Mr. Smith.