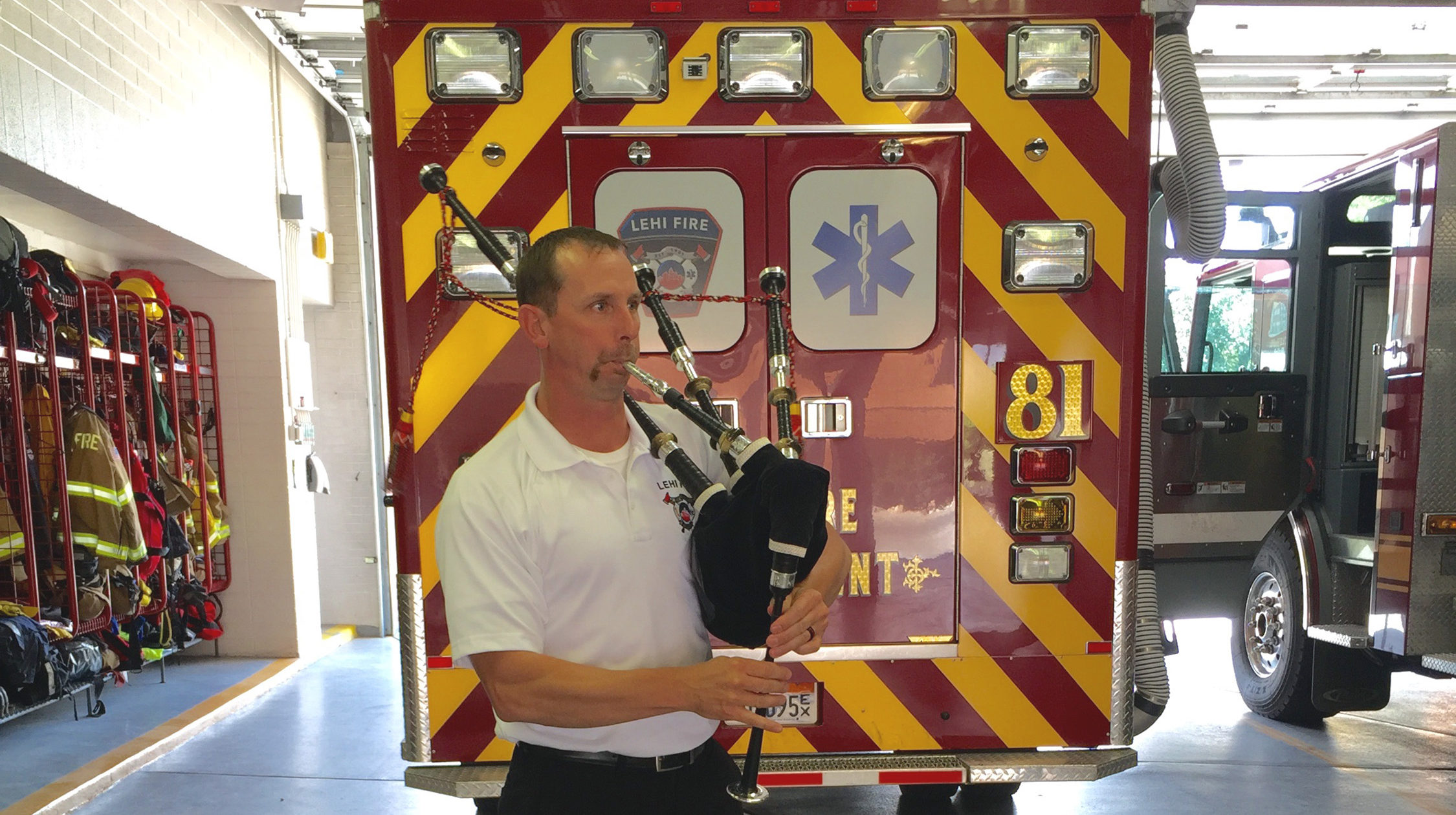 When you drive by Fire Station 81 on Center Street in Lehi, open your car window and listen for the sound of bagpipes. If you are lucky, you will hear strains of “Amazing Grace.”

For several years the Lehi Fire Department has gathered on the morning of September 11 to remember those lost in the worst terrorist attack our nation has endured. Since this year is the 15th anniversary, the LFD decided to invite the public to join them. The ceremony will begin at 8:30 a.m. on Sunday morning outside Station 81 at the bell monument. The bell will be rung fifteen times—one for each year since the attack. A moment of silence will then be observed, then “Amazing Grace” will be played as a tribute.

For years Fire Chief Jeremy Craft has wanted to learn how to play the bagpipes. As he spoke to the other firefighters, several became interested in organizing a group of bagpipe players. Craft said there are three firefighters learning the bagpipes and another three to four learning to play drums. The group had hoped to have their first performance at the 9/11 ceremony this year, but quickly realized their plan was a bit ambitious. Craft, who has been playing for a mere nine months, will perform alone at the Sunday morning ceremony, but the pipe band will continue to practice and hope to debut next summer during Lehi’s Round-Up celebration.

Craft said that he had never played a musical instrument before so he took lessons on just the chanter for six months before ordering his pipes. The chanter is the part of the bagpipe that creates the melody: a stick-like tube consisting of a number of finger-holes. It resembles a recorder. Craft now owns a beautiful set of bagpipes decorated with traditional firefighter motifs. The metal rings are imprinted with firefighter axes, Maltese crosses, and even a horse drawn firefighting hand pump. It is a beautifully crafted instrument imported from Scotland.

As the firefighters began to order kilts and other gear for their group, they discovered that wearing a tartan plaid is a matter of family pride and tradition and that a genealogical connection is needed to wear various plaids. Craft asked the firefighters to bring in samples of their family tartans. Trevor Dorton can trace his roots to the “Morgan Ancient” and that is the pattern that was chosen to represent the department. The group will soon submit an application to make this plaid the official tartan of the Lehi Fire Department.