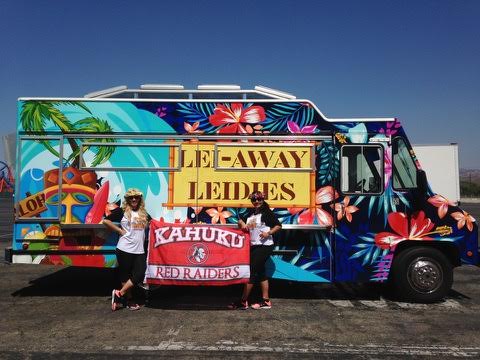 Every summer for the last seven years the Food Network has hosted “The Great Food Truck Race” with Tyler Florence. Sisters Carey Ofahengaue and Summer Prescott with their niece, Autumn Prescott, competed as the Lei-Away Leidies this summer. Ofahengaue has been running a successful fresh flower lei business, Lei-Away Leidies, on Main Street in Lehi for the last 11 years. None of the teams on the show had ever run a food truck, but Ofahengaue and Prescott know how to run a business, they’re family, and they definitely know how to cook.

In each of the six episodes of “The Great Food Truck Race,” the six teams were given seed money and challenges to see who could make the most money selling their food in different areas of California. Ofahengaue said each of the six teams had their own cameraman and producer and they would film for 12 to 14 hours every day. Each challenge took up two days, so about 24 hours of film was reduced to 15 minutes for each episode. Ofahengaue was surprised to see how much of their story was left out in the final edited product.

An early challenge in the season took place in Oxnard, California, where the teams had to use strawberries as part of their menu. The Lei-Away Leidies had an Uber driver take them to a store since they had no way to get around when they weren’t being filmed. They asked the Uber driver where to take their truck and he called his wife, who turned out to be “Auntie Tina”—a distant relative whose family Carey and Summer had known in Hawaii.

Auntie Tina has a huge following in that part of California because of her hula-dancing group and she got the word out for the Lei-Away Leidies. Their food truck looked like it was in the middle of nowhere, but thanks to Auntie Tina, they were selling their Hawaiian-style food like crazy. They even had an impromptu luau, complete with Summer hula dancing on the sidewalk.

The edited version of the show made it look like the Uber driver was a total stranger, and left out the relationship the Lei-Away Leidies had to Auntie Tina. Summer and Carey’s Irish aunt and uncle showed up at the truck and they made it into the final edit of that episode. Ofahengaue said with a laugh, “They were the only white people there and they didn’t bring anyone with them!”

The “Coconut Wireless” was the key to the Lei-Away Leidies winning the strawberry challenge in Oxnard. Ofahengaue explained that the Coconut Wireless is the way news travels in Hawaii—they only have to tell one person any news and word spreads like wildfire.

Another challenge took place in a Danish village in California. After the Lei-Away Leidies won the strawberry challenge using the power of the Coconut Wireless, Ofahengaue believes the producers wanted them to go where there weren’t so many Polynesians to come help them. Lucky for the Hawaiian ladies, the Danish village was populated with mostly members of The Church of Jesus Christ of Latter-day Saints, and once again it only took a quick message on social media to get a big group of Mormons to come support the Lei-Away Leidies’ food truck.

The teams had an extra twist for that challenge: they had to cook with aebleskiver pans instead of the regular cookware in the truck. Some of the customers at the Lei-Away Leidies’ truck stood patiently in line for an hour and a half waiting for their food! The team was docked $200 for using the word “TV” in their social media message to the LDS community, but they still made a lot of money.

The Lei-Away Leidies made it to the final three along with Carretto Siciliano, a team that included Vinny Guadagnino from the reality television show “Jersey Shore” and his mom, as well as Grilled Cheese All-Stars. Ofahengaue suspects that they were set up to fail at the final location, given the popularity of the men on the other teams where they filmed. When she watched the episode later, she noticed that Vinny and his mom had their own show on the Food Network and it was advertised during this episode of “The Great Food Truck Race.”

Even with the intrigue at the end of the race, Ofahengaue and her family team had a great time filming and working together. The sisters have been in business for years and have learned to get over drama quickly. Ofahengaue is confident that they had the best food of any of the trucks in the race. Hawaiians may have judged their menu as being too simple, but the Lei-Away Leidies found dishes that had few ingredients and could be made quickly in a small space.

Being on a TV show has given Carey, Summer, and Autumn something to brag about. Carey Ofahengaue even got a call from someone in California wondering if the Lei-Away Leidies catered. She is currently looking for a truck to get their Hawaiian food back on the road.