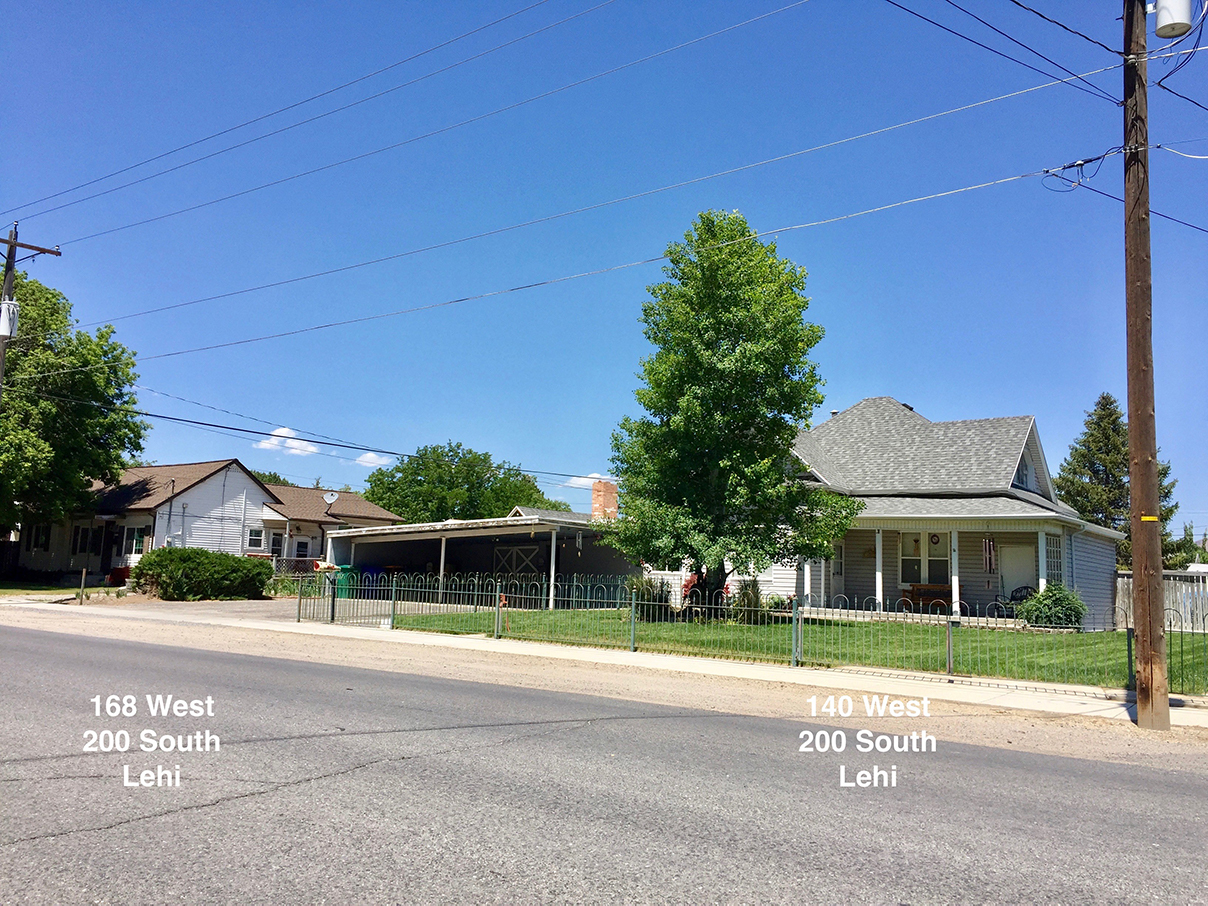 Mormon Pioneer Charles Barnes Jr. (1827-1911) of Staffordshire, England, was an early settler of the northern Utah County town of Lehi in the Utah Territory. According to a compelling narrative by Jonah Ryan Barnes, Charles Barnes’ property in Lehi shared a fence line with “the immortal Nazarite commissioned by God to protect the Prophet Joseph…,” Orrin Porter Rockwell (1813-1878).

According to Jonah Ryan, “Rockwell’s monument stands on his own property in Lehi today, across the fence from Charles’ original homestead.” Presumably the location of Rockwell’s property on the present site of the statue is based on family traditions, or on family records, but I don’t find documentary evidence that either Charles Barnes or Porter Rockwell had property on the block on which the monument, a statue of the “appointed territorial U. S. Marshal-for-life,” stands.

I do have evidence that in the early days of settlement of Lehi Charles Barnes had a home two blocks south and one block east of the block on which the statue stands, and that Porter Rockwell and his family had a home next door. A fence line separates the building lot on which a house at 140 West, 200 South stands today from the lot occupied by the house next door at 168 West, 200 South. The Barnes’ family occupied the former lot in 1857, in 1860, and in 1871. The Rockwell’s lived on the latter lot in 1860.

Charles Barnes and Porter Rockwell may well have also had property north of the fort in those early days, but the earliest known official property records don’t document such claims. Legislative action that gave citizens of the Utah Territory officially recognized title to their land was taken in 1869. This was confirmed by the distribution of official instruments called Mayor’s deeds. Utah County records reveal that on 27 January 1871 Mayor’s deeds for property on the block where the Rockwell monument now stands went to William Clark (1825-1910), William Gurney (1834-1905), and Elizabeth Marie Colville McIntyre (1802-1874). The Lehi City estray pound occupied the Northwest portion of the block. William Clark’s plural wife, Margaret Boardman (1840-1894), had an adobe home on First West Street, slightly south of the middle of the block. Sometime between 1860 and 1870 William Gurney built an adobe home on the Northeast corner of the block. His mother in law, Elizabeth McIntyre acquired a home on the Southeast corner, where the statue of Porter Rockwell stands today.

The Church of Jesus Christ of Latter-day Saints played the role of civil authority in the early days of colonization of Lehi and the other Mormon settlements in the Intermountain West. Although no records of property assignments by Lehi’s bishop are available, the church was responsible for early records known as consecration deeds. By these legal instruments, settlers in Lehi in 1856-1858 conveyed title to all their property to Brigham Young as President and Trustee in Trust of the Church. Charles Barnes signed a consecration deed on 10 January 1857. He listed an adobe house valued at $300 on the site of the present 140 West, 200 South home.

Where did Orrin Porter Rockwell hang his hat and pistols when he came home after a rough day, or week, or month of apprehending lawbreakers throughout the territory? No Porter Rockwell consecration deed has been found. The only document I know of that indicates the location of Rockwell’s property in Lehi is the 1860 United States Census. On 29 September 1860, the census taker found 35-year-old “herdsman” Orrin P. Rockwell, 30-year-old Mary Ann Neff Rockwell (1829-1866), and three children in dwelling 3518. On the same day he found 31-year-old “cooper” Charles Barnes, 37-year-old Rhoda Wonfor Barnes (1830-1879), and four children in dwelling  3517 in Lehi. Those dwelling numbers are the closest thing to house and street numbers that exist for Lehi in those days. They indicate that the Barnes and Rockwell families were next door neighbors in 1860.

The present fence line between the current 140 West, 200 South and 168 West, 200 South homes might be the appropriate site for a statue commemorating the domestic life of the Lehi man “who purportedly killed more men than Jesse James, Wyatt Earp and Billy the Kid combined”.

A version of this article with full documentation, and other articles by Wayne E. Clark, are posted at Lehi Historical Society and Archives: Historical Archive Indexes, https://www.lehihistory.com. Wayne E. Clark is a retired Auburn University professor. He can be contacted at wayneeldenclark@gmail.com.