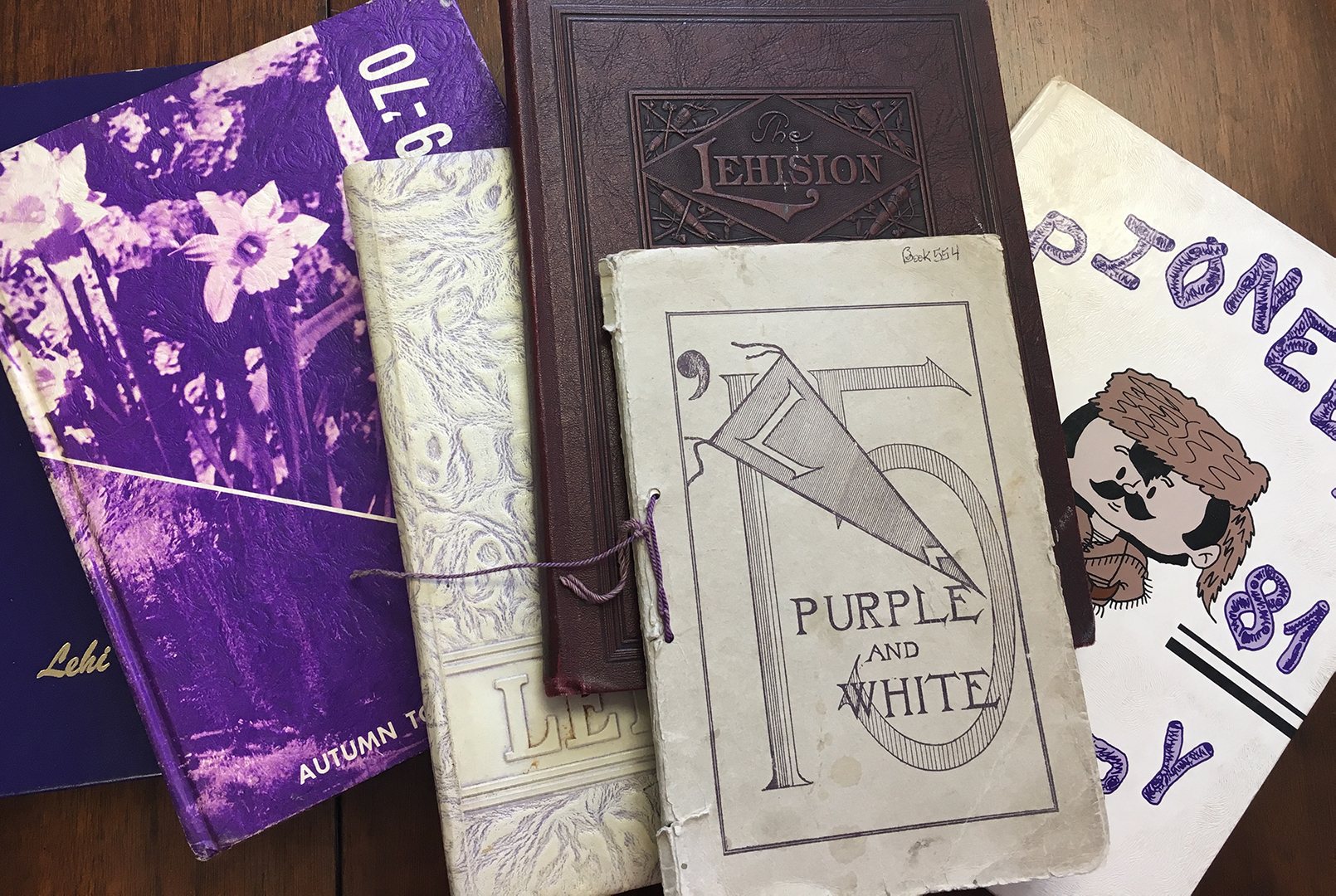 Yearbook Day is always one of the best days of the entire school year. Friends sign each other’s books with wishes of a great summer, recollections, and sometimes even a sincere compliment. After summer, however, most just sit on the shelf and collect dust.

But at The Lehi Historical Society and Archives, these books are a valuable resource.

“A lot of our best business photos at the Archives are from the yearbooks,” said Robb Strong, an Archive volunteer. The backs of the yearbooks are full of advertising for business sponsors.

Not only are these books helpful when looking for information on relatives, businesses or people in the community, they also tell a lot about Lehi during that time period.

In the 1915 Purple and White, the name of Lehi’s high school yearbook until 1916, there is a picture of the local dance hall, Smuin’s Academy, now Abbington Manor, decorated for the prom.

The book reads, “Indeed, the gathering was a notable event, for it was the first Junior “Prom” that has ever been given in the history of the local high school. The Prom was voted a brilliant success from every point of view and will be remembered for a long time by everyone present as one of the most decided social successes of the year.”

The 1915 Lehi High School yearbook staff appears, “in session.” There were 20 students in the 1915 graduating class. They attended the Central School, which was located at the northeast corner of 600 North and Center Street. | Courtesy The Lehi Historical Society and Archives

The 1928 Lehision, the name the yearbook took on in 1916, contains an entry entitled, “A Page from a Senior’s Dairy.” It reads in part, “We surely did get a lot of knocks, although I doubt if the upperclassmen knew we were in school except when they had difficulty in getting through the halls.” It appears there were 42 seniors that year. They attended the old Lehi High School which used to be where the Lehi Fire Department is today.

That same Lehision contains an ad for The Gift Shop of E. N. Webb. It reads, “Give the Graduate a Watch. We can please the boy or girl with pocket, strap or wristwatch.”

The 1948 Lehision says of the Boosters, or today’s drill teams, “The Boosters consist of a peppy group of girls whose job consists of entertaining us during the half of the games and aiding our school spirit. They had to pass the test of being, ‘so round, so firm, so fully packed,’ besides being up in their school studies.”

Of the FFA, the same yearbook reads, “There is really a Future in store for these boys as Farmers of America. Who knows but what they will someday use atomic energy to plow a field, radar to keep the cows in the pasture, and guided missiles to kill off the bugs. Does this sound a little fantastic? Maybe it is, but the boys are doing the ‘ground-work’ now by learning the improved methods of farming known today.”

In 1991, the Lehi High School yearbook became The Legend.

Robb Strong, Archive volunteer, shows off a picture of his mother in the 1956 Lehi High School Pep Club. “Now I know why I’m so short,” he laughed. His mother stands several inches shorter than the rest of the girls in her row. | Lara Bangerter

Strong said he has recently enjoyed looking at his mother’s yearbook. “Now I know why I’m so short,” he laughed. In a picture of the 1956 Pep Club, his mother, LaVee Hadfield Strong, stands several inches shorter than the rest of the girls in her row.

Lara M. Bangerter is the director of the Lehi Historical Society and Archives, where collecting, obtaining and preserving Lehi history is the mission. Bangerter enjoys her days learning about Lehi’s great past and working to preserve history being made today.

While the Lehi Historical Society and Archives has a vast selection of yearbooks, namely from Lehi High School, it does not have original copies of all years it has been published.

“Before you throw out a yearbook,” said Robb Strong, Archive volunteer, “please give us a call. We might even pick it up. We want to preserve it for future generations to enjoy.”

With a small collection of yearbooks from Willowcreek Junior, Lehi Junior and Skyridge as well as years of class photos and PTA scrapbooks from Sego Lily Elementary, the Archives accepts and desires all documents dealing with schools in Lehi.