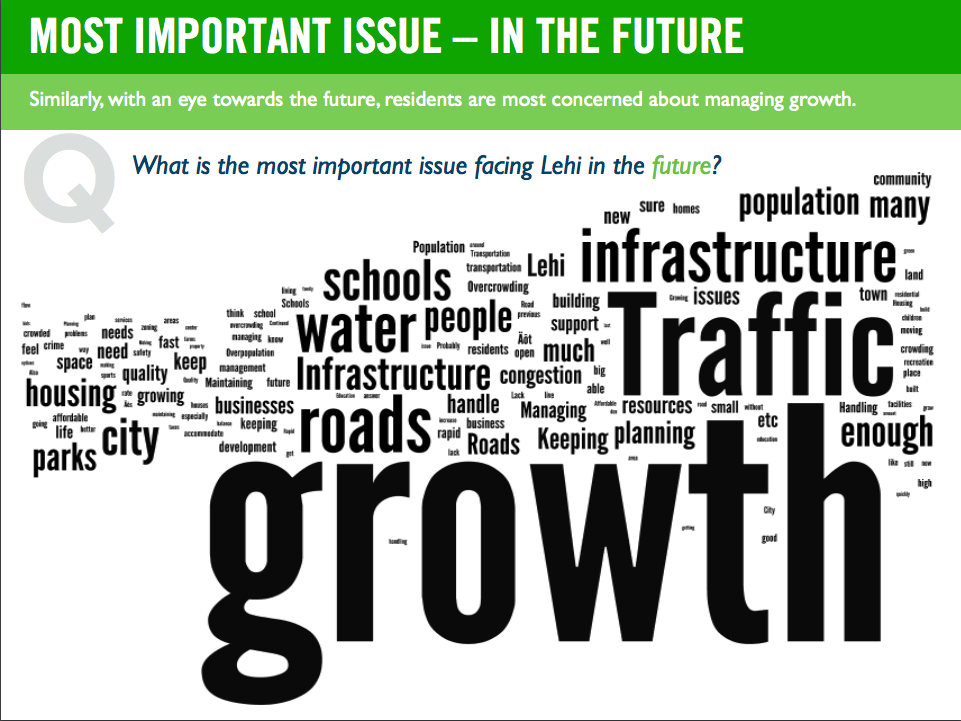 Survey: Most citizens believe Lehi is growing too quickly

Lehi City commissioned Salt Lake City research firm, Y2 Analytics to conduct a citizen survey in March of this year. Over 2,000 people were surveyed from various databases, primarily from the Lehi Legacy Center and from other existing and purchased lists. Results were presented to Lehi City officials in City Council meeting on May 1.

A similar survey was conducted in 2015, and 2017. For this year’s survey, respondents were grouped into six regions of the city. Regarding the overall direction of the city, the study found that, “Although an overwhelming majority of residents believe the city is headed in the right direction, overall sentiment is trending down from previous years.”  Most respondents to the survey feel Lehi City is generally headed in the right direction, but the survey found that “residents in the West region of the city have the most negative opinion. Residents in the Mountain Side region are most likely to approve of the direction of the city.”

Overwhelmingly, citizens are concerned with growth management in Lehi City, which echoes the concerns of Lehi City leadership. Almost 80% of residents believe the city is outpacing itself in terms of growth.

Lehi Assistant to the City Administrator Cameron Boyle said, “Growth and traffic continue to be the most important issues identified in the survey. While the growth may not be slowing down, we continue to look for ways to better manage growth and maintain infrastructure, improve the quality of services provided to our residents, and remain a family-centric community. We feel the survey positively reflects those efforts.”

Regarding Lehi City services, the highest ranking for satisfaction on a 1-100 scale was “Fire and EMS” services at 86% satisfaction, and the lowest satisfaction was the “Development permitting,” at 49% satisfaction. This reflects the general feeling among respondents that the city is growing too quickly.

Even with the increase in Lehi’s population, over 90% of respondents agreed with the statement: “I feel safe living in Lehi.” The questions that revealed the lowest satisfaction among respondents were, “Lehi has the kinds of businesses I want,” at 67% and “I trust Lehi City staff and elected officials,” at 60%. The same question asked in 2017 yielded a result of 59%.

More respondents receive information about the City of Lehi through social media now than in prior years, and more are receiving city information from newspapers, such as the Lehi Free Press as well.

Citizens responded to the query, “What brings residents to Lehi?” The survey said, “Consistent with last year’s results, respondents enjoy the convenience and “small town feel” that come with living in Lehi, as well as the people and sense of community.”

Since many of the respondents were from the Lehi Legacy Center database, the survey said, “Legacy Center users tend to be slightly older than the city at large, therefore the sample in this year’s citizen survey is shifted slightly toward the middle-aged demographic.”

Boyle summarized, “Overall, we feel the survey positively reflects on the great quality of life in Lehi. This year, in addition to our panel from Utility Billing emails, we also sent the survey to email addresses collected from the Legacy Center. You will notice a shift in the survey results from a generally newer population to a more established base of residents. When surveyed in 2017, 39% of respondents had lived in Lehi less than 5 years. In 2018, only 19% had lived in Lehi less than 5 years.”

The survey, results, and methodology are all available to view on Lehi City’s website:  www.lehi-ut.gov.