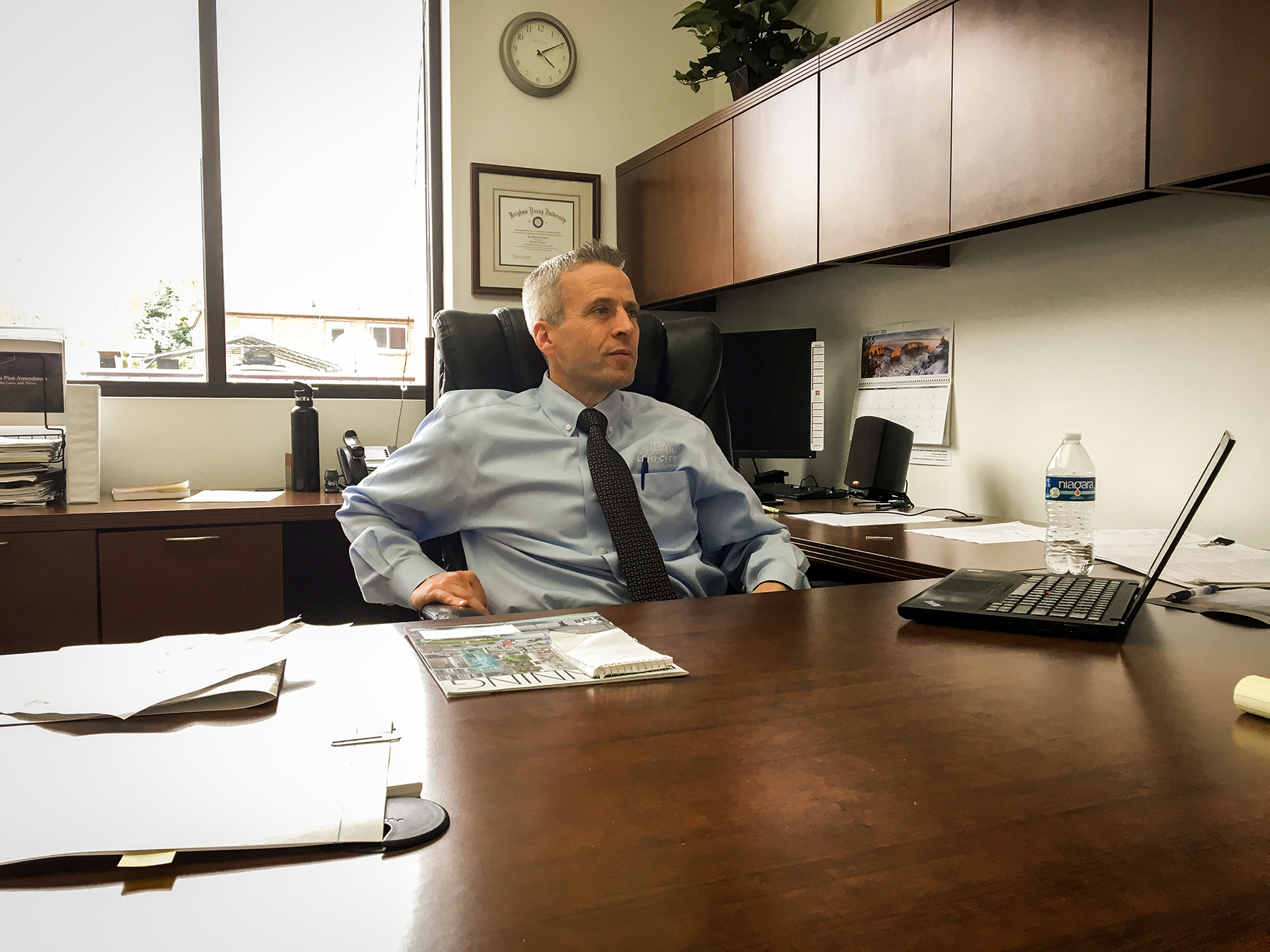 Kim Struthers has been the Lehi City Planning Director and now Community Development Director for nine years. He has been in this position after working in Payson and on Lehi’s planning staff.

LFP: As Lehi City Planning Director, and now as Lehi City Community Development Director, what are some of the biggest challenges you have experienced?

KS: It’s probably the tremendous growth and the rate of growth. I think it’s unprecedented. It hasn’t slowed down. During the last big downturn in 2007 and 2008 it slowed down, but a lot of cities during that period basically shut-off completely. We continued, it dropped maybe by half or maybe two-thirds, but it never stopped. It’s been continual.

I think the biggest challenge the community is dealing with is just the amount of change; the sheer amount of development in such a short time span. When I started working for the city, our population was just over 19,000 and now we figure it’s at least 62,000. In fact, I think we’re probably in the mid to upper 60’s, but that’s unofficial.

LFP: What projects have been unpopular or difficult to complete?

KS: There was a lot of concern about Ivory Ridge. When this project started there was a lot of objection. I would hope now that it’s all said and done…well, they’re not all built out yet, but I hope the people who drive through now say, “Okay, this wasn’t a mistake. It was done right. It was well planned.” I think it’s one of our nicer projects in the city, but a big challenge.

A more recent one would be the Family Search building in Thanksgiving Point. That had a lot of public comment and debate. If you’ve been out there, it turned out to be a gorgeous building. The Church did compromise. They originally wanted to build two office buildings and they only built one. They built a stake center. I think that softened the impact for those neighbors. That was a difficult one to work through. There were a lot of very strong opinions. I think there are those who would have rather had the driving range there. So much growth causes growing pains and I just think nobody likes change.

LFP: What do you see as a planner that is difficult about big developments like Traverse Mountain? We know this is different because it is an HOA (homeowners association).

KS: I think we have a pretty good balance up there because there is some public open space. In fact, there is one of the largest open spaces that will be developed as a park. It’s a big 13-acre park up by Vialaetto.

Probably the biggest challenge with Traverse Mountain is that originally it all started out as one master developer, which was the Christensen Brothers. When the downturn hit in 2007, it fragmented and you had these big chunks of land that went to different entities. Some of it got repossessed by the bank and then sold to other developers. I think we have gotten to a point where everybody is aware of each other’s interests and we’re trying to make sure we’re managing and trying to get everybody cooperating.

Toll Brothers is coming. They are a big national homebuilder. They just bought a big piece up in what we call Central Canyon. They’ve done a lot of grading. We decided we didn’t want any more of this export where the trucks were having to drive down through neighbourhoods, so they have really had a challenge to work it out to have all that balance coming in or leaving that site.

LFP: In the most recent survey the city did, most of the city felt that Lehi was growing too fast. 83 percent felt that it was either growing much too fast or too fast. What is your feeling when you hear that?

KS: I think it would be nice, this is my own opinion, if we could, just tone it down a little bit. I think there’s a perception that the city is behind all this growth. We are just trying to plan and manage the growth, but so much of it involves bigger forces. It is the economy itself and our location, between Provo, Orem urban centers and Salt Lake. People want to be here. I think there’s almost a perception that it is like Sim City and as a city we get to decide. People will say, “We need a grocery store in our neighbourhood, and they think we have the ability to say, ‘OK Smith’s you are going to put a store right here.’ It doesn’t work that way. We can zone for certain things, but we can’t force people to build or not build. And then there are private property rights and if the city has the utility capacities and we have property zoned for a certain thing, we can’t say, ‘We’re growing too fast, we’re going to stop development. There are mechanisms in the state code that prevent “moratoriums.” You can impose a moratorium but you just can’t do it because you feel like you are growing too fast. You have to prove that the growth is outpacing your water, sewer capacity, etc.

LFP: Could we pace the growth by limiting the number of Planning Commission agenda items?

KS: We could—and we do have a time limit. The meeting is supposed to end at 10:30 p.m., but we often extend the meeting several times. Unprocessed agenda items would have to be rolled over to the next meeting.

LFP: What is wrong with that?

KS: I have talked to our administration and have said, “‘We’ve got these agendas that are just enormous.’ And I think part of it is the mindset of the elected officials is being a high-growth city.

LFP: So, you really think this is coming from the Mayor’s office and the City Council and they are saying it’s okay to not limit agenda items or meeting length or the number of projects that get approved?

KS: My impression is the Mayor and Council right now know we are growing really fast, but I don’t think it’s of such a concern that they want to stop growth.

LFP: In one city council meeting council member Chris Condie commented on the fact that the city is out ten years for infrastructure spending before we can add more money for park development. You mean Mellor Rhodes and Peck Park will sit there for ten years before they can be developed?

KS: We tried to get a bond passed but the residents didn’t want that. We asked for $50 million. I think the estimate for Peck Park was 15 to 17 million. That’s a lot of money. You know that the impact fee on a per unit basis is about $1200. That’s a lot of housing that you’d have to approve to generate the money needed for those big parks. I think the Mayor has some different ideas on how to see some development on some of these parks. He is trying to be creative and look at other ways to fund those. I think we all would love to see something happen sooner than 10 years.

LFP: How can other communities build amazing sports complexes and not Lehi?

KS: I don’t know how they’ve been financed. I guess that’s a question we could ask some of these cities.

LFP: What do you see as the biggest challenges going forward as a planning department considering we still have 60 percent of the city to be developed?

KS: I think there are so many variables and factors to consider. You know there would probably be pressure to go back in and redevelop some of the older neighborhoods once Lehi becomes completely built out. Just like Provo, they are rebuilding neighborhoods that are older.

LFP: The city is planning on redoing the land use map. What changes do you see being made?

KS: The last time we did this was 2012 and there are changes that need to be made especially regarding transportation. We need to focus on future transit, so we can be ahead of that curve and not react but be proactive. We are looking at Trax or light rail on the east side and Frontrunner or heavy rail on the west side. We need to re-think the whole area around Thanksgiving Point. Instead of just a suburban office park area, we feel like it should lean more toward housing mixed in with offices and retail. It would be more of an urban environment than just a suburban area where you have office buildings surrounded by parking lots.

LFP: What would be your proudest accomplishments that you’ve done for the community?

KS: I would say my involvement in (and it wasn’t all me) the preservation of over 900 acres of open space in Traverse Mountain. When we redid the area plan of 2012 we were able to work with developers and they dedicated all of that property to Lehi City. We are planning for some mountain biking trails, etc. I think years down the road somebody will look back and say, ‘we’re glad Lehi City was able to pick up that property.’

We got an award a couple of years ago for creating the Jordan River Overlay, where we looked at that whole river corridor and created minimum setbacks, so you don’t just engulf the river with development right up to the banks of the river. We are trying to keep things set back and create buffers leaving green space and the natural environment.

We are also working very hard on design standards so our commercial, and anything not residential, will have wall variations, architectural considerations and different kinds of hard surfaces on the building so you don’t just have “big boxes.” We want buildings with charm and character.

LFP: Thank you Kim, we appreciate your time.