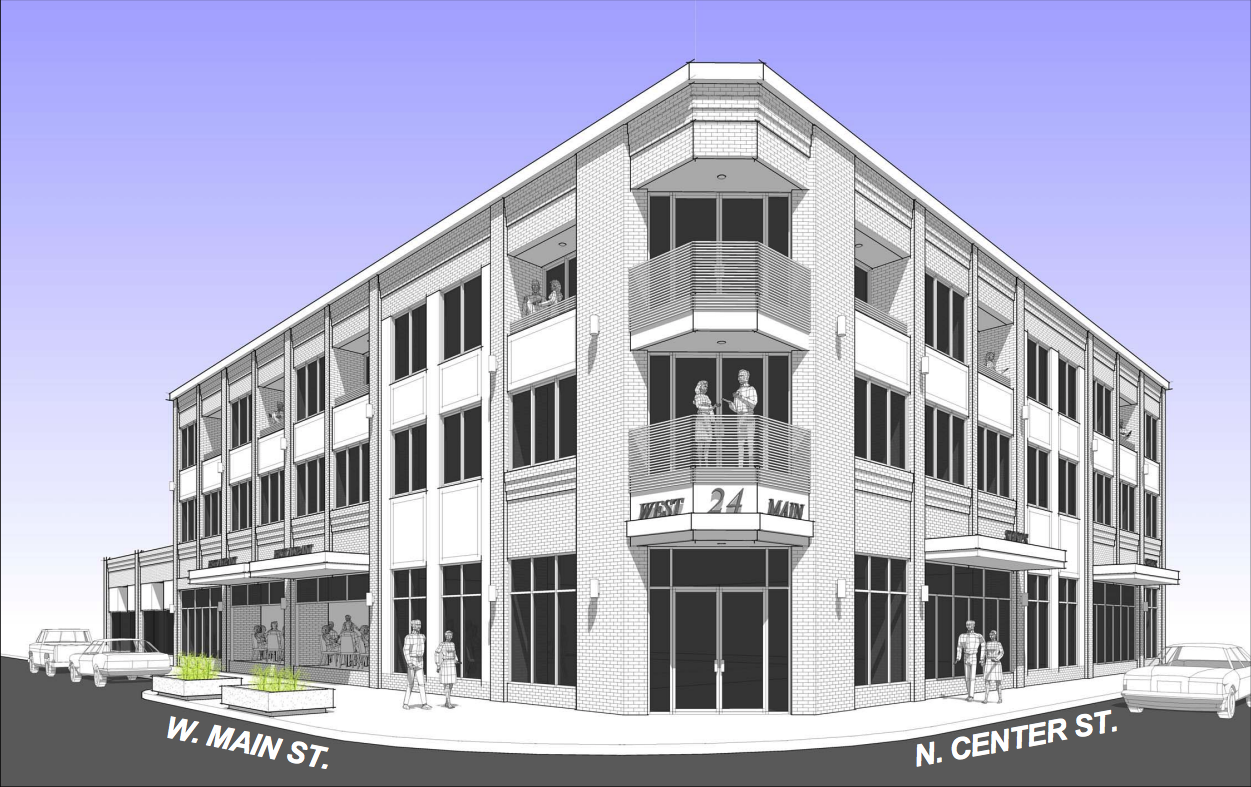 After being open nearly 50 years, Porter’s Place, currently an empty restaurant located in the heart of downtown, has been sold to Lehi resident and developer, Brian Brown of Parker Brown Real Estate.

Included in the sale was the Porter’s Place restaurant, the adjacent building and the parking lot next door. The properties are located at the corner of Center Street and Main Street in Lehi. All three properties have been sold as one package, according to Marlin Eldred, Director of Economic Development for Lehi City. The plan is to have the buildings torn down and redeveloped, keeping the historic look and feel of the old restaurant.

Porter’s Place had been a steakhouse restaurant on Lehi’s Main Street from 1971 to 2017 and celebrated all things Porter Rockwell – a figure of the Wild West, an early Mormon pioneer, and a law man in the Utah Territory. The building that housed the restaurant, however, is about 100 years old and had extensive plumbing issues that caused city officials to close the building in December of  2017.

At the time of the sale, the building was owned by Lehi City and was being leased to restaurant owner, Bob Trepanier. Trepanier owned the Porter’s Place property from 1986 until 2008 when he sold it to Lehi City for $250,000. Trepanier leased back the property and continued to run Porter’s Place until the sewer line broke several months ago.

“The city called in a plumber and decided that the plumbing fix was bigger than just “snaking” the backed-up plumbing and slow toilets,” said Trepanier. The age the of building, plumbing issues and the cost to bring the building up to code contributed to the city’s decision to sell the properties. “This was a tough decision, we discussed the properties in public meetings and two executive sessions,” said Eldred.

In January, a letter issuing a 60-day notice to end the lease with Trepanier was given, and the city began accepting Request of Proposal (RFP) bids for the purchase of the properties.

“I was sad the city was not willing to make the repairs needed on the building,” said Trepanier. “I wanted to stay and continue my business. It took weeks for the decision to be made about the building and, unfortunately, the sewer issue happened during one of the busiest times of the year for me. I was losing money every day,” he said. Eventually, a settlement was made between Trepanier and the city, according to Trepanier. “I am not bitter,” he said, “but wished we could have figured out a way to have saved the building and kept Porter’s Place in Lehi.” Trepanier has since moved Porter’s Place to Eureka. (See sidebar story)

Three bids to purchase the properties were submitted by the deadline and the city accepted an RFP proposal and plan for redevelopment from Brown for $150,000. The two other bids submitted were similar in price and plan concept, said Eldred.

The city had a specific criteria for the redevelopment of the space which would keep with the “look and feel” of the downtown area, Eldred said. Brown’s proposal best fit that criteria in concept, design, layout and price.

Brown’s proposal is to build a three-story mixed-use structure with retail space on the main floor which would more than likely include a restaurant and/or dessert place. The second story would be office space and the third floor would be residential condominiums.

“Parking is an issue in downtown, and we are working with Brown to figure out the best way to incorporate parking into the plan for the area,” said Eldred.

“We hope to close on the property in mid-July,” said Brown. “We are working on a plan to address the parking issue and will be submitting our building plans to the city for approval. We love Lehi and the downtown area and we are designing a brownstone style building that will preserve the historic and hometown feel of downtown Main Street. We will be incorporating the old with the new and hope to reuse some of the building materials, including brick and other memorabilia from Porter’s Place. We want to build something the city will be proud of. We are excited and have a strong vested interest in Lehi.”

Brown is the buyer of the properties, but is working with Parker Brown Real Estate and Knowlton General to develop the project. “We plan to relocate our offices to the new building,” said Brown.  Brown’s office is currently located in the Colonial House on Main Street in Lehi which he bought and redeveloped about 6 years ago. “We are proud of what we did to restore the Colonial House and worked hard to preserve the history of that original building when we remodeled it,” Brown said. He hopes to get approval for their plans and start the project before the end of the year.

Porter’s Place in Eureka rising to the challenge

After relocating the restaurant from Lehi, Porter’s Place is now in the historic mining town of Eureka. | Gina Halladay

In December, Trepanier discovered plumbing problems in his restaurant, then located on Main Street in Lehi. Trepanier contacted his landlord, the city of Lehi, about the problem. After weeks of being closed during one of the busiest times of the year while the plumbing issues were being investigated, the city decided to forego making repairs because of the extent of the damage and the cost to bring the building up to code. The city issued Trepanier a 60-day notice to vacate in January of 2018.

So, Trepanier began a search to find new location for his Porter Rockwell-themed steak

house restaurant. “I have been intrigued with Porter Rockwell,” he said.  Rockwell is afigure of the Wild West, a Mormon, and a law man in the Utah Territory. “I read a bookabout Porter Rockwell when I was in my 20’s and have been fascinated with him and his life ever since.”

“The Lehi location of Porter’s Place was in a nearly 100-year-old building and was perfect for the themed restaurant,” he said.

Finding a new location with historic character for a new restaurant was not easy. Trepanier searched for a new location for weeks,  while worrying about his income and providing for his growing family.

In addition to the business changes, in February, his wife of five years, Cherry, gave birth to twins. Trepanier is also the father to two adult children. “So yes, it has been a bit crazy,” Trepanier said.  “My Lehi restaurant got closed during the Christmas holiday season and I was waiting for the city to decide whether they were going to fix the plumbing problems. I was worried about having a steady income and started looking for a new location for my restaurant and my wife was very pregnant,” he said.

“I was sad that we could not have kept our Lehi location, and I think with better communication with the city–which was also my landlord–that maybe we could have worked something out,” he said.  “I had very loyal customers and support in Lehi.”

Trepanier actually owned the building in which Porter’s Place was located from 1986 to 2008.  “I sold it to the city for $250,000 (during an economic downturn) and a few years later offered to buy it back for $300,000,” he said.  “So, I was surprised when I heard that they sold it for $150,000 last month.” Trepanier had been leasing the building from the city since 2008.  After the city decided the repairs were cost prohibited and the lease was terminated, Trepanier had to find a place to move his restaurant.

After checking out several possible restaurant locations, Trepanier was happy to lease a former restaurant located on Main Street in Eureka, which is about an hour from Lehi.  “When I first saw this location, I knew it would be the new Porter’s Place,” he said. “It just feels right, and it has everything we were looking for with historic features like wood and brick.  And the landlord is working with us to help us create our vision for the place,” he said.  “And I am happy to report we have great bathrooms and flushing toilets! “

And yes, Porter Rockwell, has a history in this mining town of Eureka as well. Rockwell had a ranch just west of Eureka.

Bob and Cherry Trepanier and their 4 month old twins stand in the entry way of the newly relocated Porter’s Place restaurant in Eureka, Utah. | Gina Halladay

“We have modified the restaurant and it will eventually have about 100 seats,” Trepanier said.  “We are open now and will be expanding the restaurant into the space next door in the next few months.  The new location is called Rockwell Station with Porter’s Place as the restaurant.  I own a locomotive engine with several cars, and eventually my dream is to get that operating as a tourist attraction by offering train rides from Rockwell Station to the surrounding area. I have been talking with the Mayor of Eureka about my plans and he is supportive,” he said

Eureka is a town of only about 800 but has great traffic flow with people heading out to the sand dunes. “We have been busier than we thought we would be,” he said.  “I am happy that the people of Eureka and many of our Lehi customers have come out to support our new location. A giant portrait of Porter Rockwell will welcome guests in the soon to be renovated dining room,  just like it did in Lehi.”

The menu at the Eureka location is exactly the same and Trepanier noted that “our regular customers are happy about that.”  He also plans to add beer to the menu. Trepanier and his family plan to move their home to Eureka in the next few months.

Porter’s Place, located at 321 Main Street in Eureka is open 11 a.m. to 9 p.m. every day but Tuesdays and some holidays.

Arts in the Park family concerts