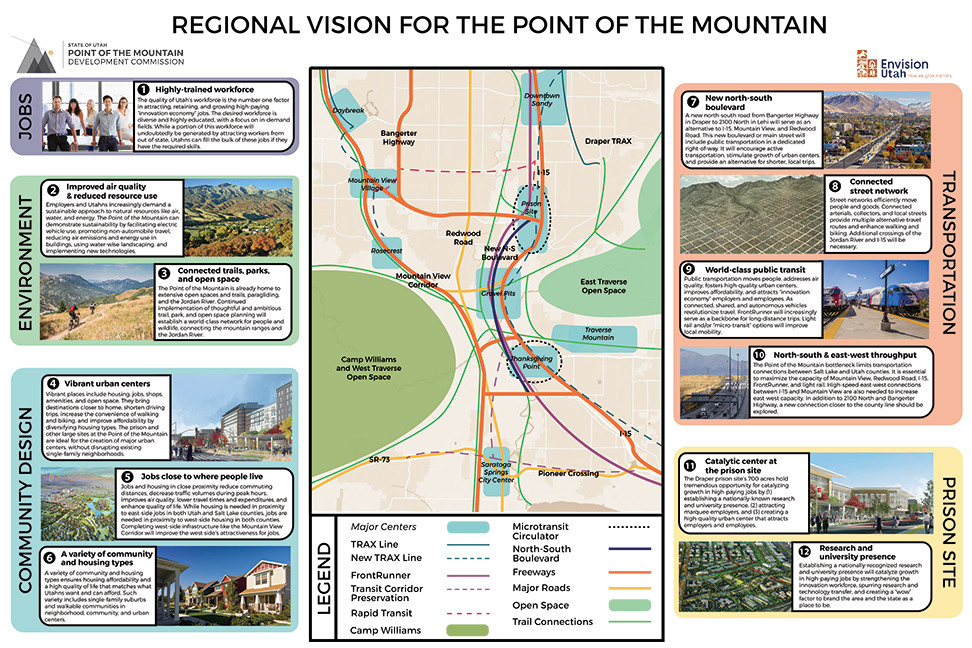 Lehi City Council met with Mayor Mark Johnson in City Council chambers to hear presentations and reports during pre-council meeting held August 14, 2018. Envision Utah Point of the Mountain Phase 3 was presented by Ari Bruening, COO and Ryan Beck, Vice President of Envision Utah planning. They presented an update of the proposal to the City Council. Bruening said, “This is the final of three phases in the project. Phase 3 involves the vision and funding. The jobs that will be created will be better paying jobs and would raise the median income of the area.”

Fire Chief, Jeremy Craft, approached the Council about the need for two new fire trucks or fire apparatus. “Both engines 81 and 82 are nine years old and both need replacement. We try and get 10 years out of a frontline apparatus and five years reserve, but they both have over 9,000 engine hours,” said Craft. The staff and Council members discussed purchasing options.

Steve Marchbanks, Parks and Facilities Manager reported that some children had been burned on the play structure at Ivory Ridge Park. There was also issues with woodchips from the playground getting into the splash pad and causing the pumps to malfunction. He suggested replacing the woodchips with rubber matting. He also suggested that a shade structure by built to protect the equipment from the sun and heart. Dean Lundell, finance director, said “put together a cost sheet and we can make an amendment to the budget.”

Kim Struthers, Community Development Director, discussed the selection of a consulting firm for an update of the Lehi City General Plan Land Use Element. Fregonese Associates has been selected for the update. The firm is currently working with Payson City and other local agencies. “We selected them because they have additional tools, experience, and a transportation component to their team,” said Struthers.

Keith Jonsson also addressed City Council during the citizen input session expressing concern for his mink ranch. The growth in the area is making it hard for him to continue to operate. He is thinking of relocating his operation. He said he has been discouraged with the developer to the west. Jonsson believes his mink are not being protected. He talked about a proposal he had made to the city. Councilmember Condie reassured Jonsson that no one wants to push him out of business. Councilmember Hancock agreed that Mr. Jonsson’s livelihood needs to be protected. Mr. Jonsson requested an agreement with the developer and the City, and then requested that someone be responsible to monitor the development. Craig Chambers, Lehi City attorney, determined that the “Right to Farm” ordinance can be enforced with civil action. Chambers also said the City Council could decide if they wanted to make violations a criminal offense.

In regular City Council meeting Rugby and Emerson Taylor and their father presented their idea to the City Council. They would like to construct a large S for Skyridge on the hills of Traverse Mountain. They would also include an L for Lehi in a separate area. Staff suggested research on the proposal.