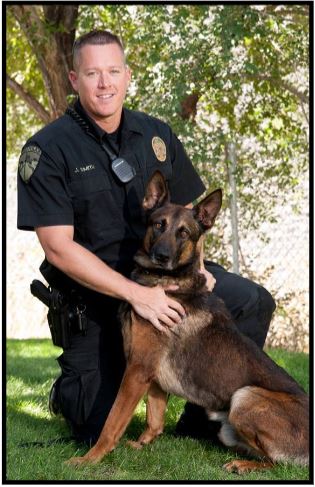 Last Thursday the Lehi Police Department lost one of their own, a K9 “officer” named “Robbie,” to cancer. The dog formerly served the LPD by detecting narcotics and assisted in apprehending criminals.

“I picked Robbie as my K9 partner when he was four years old. I tested several dogs but was instantly drawn to Robbie. He proved to be a great fit for me,” said Robbie’s handler, Sargeant Jeff Smith.

Smith recalls the first time he and Robbie went out on a police call. Robbie was sniffing the interior of a vehicle for drugs and Jeff noticed that the dog continually turned to a box of Whoppers candy. “I was a little frustrated with him. I thought he was getting distracted by a treat,” said Smith. Finally, Smith opened the box which was sealed like a normal candy box, but instead of treats, Smith found a quarter pound of methamphetamine. “I learned not to underestimate that dog,” said Smith.

“Robbie had an incredible nose for drugs, we saw a lot of success because of it,” said Sargeant Smith. “I believe Robbie’s impact on the community was significant. He loved participating in K9 demonstrations for groups, “say no” school assemblies, and other community events. Robbie was adored by the community and enjoyed receiving appreciation.”

Unfortunately, Robbie had to retire after the strain of the job and injury in his shoulder prevented the dog from performing his duties. “Robbie was a wonderful member of our family. My kids had a lot of fun with him and loved giving him commands. Many people have a false idea that police dogs are vicious. That’s not true, Robbie was a good dog, playful, and obedient,” said Smith.

After a few years of retirement, Robbie was diagnosed with cancer. His battle was short as the cancer took him quickly. Sargeant Smith will not be holding a public funeral for Robbie.