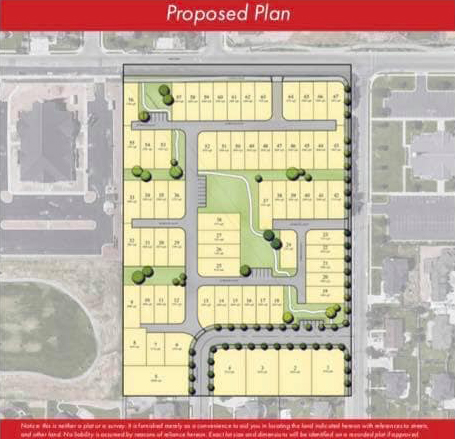 The first Lehi City Planning Commission meeting of 2019 held on Thursday, January 10, featured emotional public input about one of the largest mink operations in Lehi.

In considering Pascal Meyer’s request for revisions to the approved Hunter’s Grove office site plan, a medical office with additional floors to lease with a possible reception center on the top floor, members of the Planning Commission discussed Meyer’s request to reduce their original parking stall request by 20%. Planning Commission Member Abram Nielsen commented, “We build parking lots for Easter Sunday. I rarely see any parking lots in Lehi completely full during the day. I’m always in favor of reducing the size of parking lots.”

Heather Seegmiller, Planning Commission Member, disagreed that street parking would be adequate at the Hunter’s Grove offices if a reception or party on the top floor took place during the day. She cast a dissenting vote, but the motion to approve the Pascal Meyer’s office building site plan carried with a positive recommendation to the City Council.

Brad Mackey presented a request from Ivory Homes for TH-5 (Transitional Holding) zoning on the Dixon Annexation, approximately 8.08 acres of property located at 3200 North 300 West. Mackey referred to an open house held by Ivory Homes to obtain input from neighbors earlier in the week and indicated that Ivory Homes would use suggestions from the meeting as the development is planned. Currently, the Dixon property (a mink ranch) is part of Utah County, not Lehi City.

“The issue is whether Lehi City should allow the relocation of an operating mink farm from Utah County to Lehi City, a virtual move, but it’s the same as requesting that a mink farm move in from another location,” explained Chris Bowerbank, a concerned resident. “Ivory Homes didn’t tell you about all the letters of opposition to this move. They are under contract [to purchase the mink farm], but it’s not finalized. Ivory could still pull out if they don’t get the zoning they want. That would leave Lehi City with the ramifications of the annexation of the mink farm,” said Bowerbank. He was under the impression that the Dixons would continue to operate the mink ranch for as long as possible, which he claimed was in defiance of Utah County Development Statutes. “We have no confidence that if this existing use is allowed to continue, the Dixons would suddenly become fully compliant. A conditional use needs to be included that they’ll cease to operate the mink ranch within a reasonable amount of time once it’s recorded in Lehi City,” said Bowerbank.

More neighbors went on record during the Planning Commission meeting, some very much in favor of annexing the Dixon farm to get the process of moving the mink ranch underway. Lehi resident Brian Perrin said, “I’m sick of the flies and the smell too, but I oppose the blank check aspect of Ivory’s request. Responsible development is not a foregone conclusion. We’re talking as if there’s nothing worse than a mink farm in the neighborhood and that’s just not true.”

Mink ranch owner Keith Johnson said, “No one has mentioned yet that the mink ranch has been in operation for 40 years and the houses have been there for about 14 years. These homeowners should be whining to the people who sold them the lots. Agricultural protection just ran out on the Dixon farm and they didn’t renew it, which means it was in place for the last 20 years. Developers are supposed to notify buyers about nearby land under Agricultural Protection.” Johnson also explained that the mink ranch is an on-going business and the Dixons have a right to accrue equity back before they go. “Lehi has not protected the mink ranches, and I agree that it’s time to move on. They need to be compensated,” said Johnson.

After more residents expressed concerns about a high-density development in place of the mink farm, Brad Mackey came back to the podium. “I appreciate all the comments and I want to clarify that we are not building a high-density development on this property. There are no attached units, only single-family homes. This is the where we have to start in this process, that’s why we’re here tonight. We have to start with the annexation before we can move on to the next step. I think we’ve got a great plan in place, it will be about seven units per acre.”

Planning Commission Member Matt Hemmert commented before a motion was brought on the Dixon annexation, “Mink farmers have gotten a bad rap in Lehi. Really, they’re damned if they do and damned if they don’t. We’ve got a farmer who wants to move on, and people are giving him a hard time for the way he’s doing it. Whether the property is annexed or not, we still have a mink farm on it.” Ivory Homes request for TH-5 zoning on the Dixon annexation was unanimously approved by the Planning Commission for the City Council.

The rest of the items on the January 10 agenda were unanimously approved with much less discussion. During the Ivory Development request for review of the Holbrook Place residential development at 2600 North 3600 West, members of the Planning Commission wanted to know if there was a way to alert buyers that there is a major arterial road planned near their neighborhood. The Clubhouse Drive extension that was axed in the summer of 2018 because of neighborhood opposition is still part of the long-term transportation plan with Lehi City engineers as a possibility for access west of Thanksgiving Point. Lehi City engineer Ross Dinsdale explained that the road would be under construction at the same time as the homes are being built. The city will stripe the road as a three-lane road, which would stay the same size even if it is repurposed as a major arterial road.