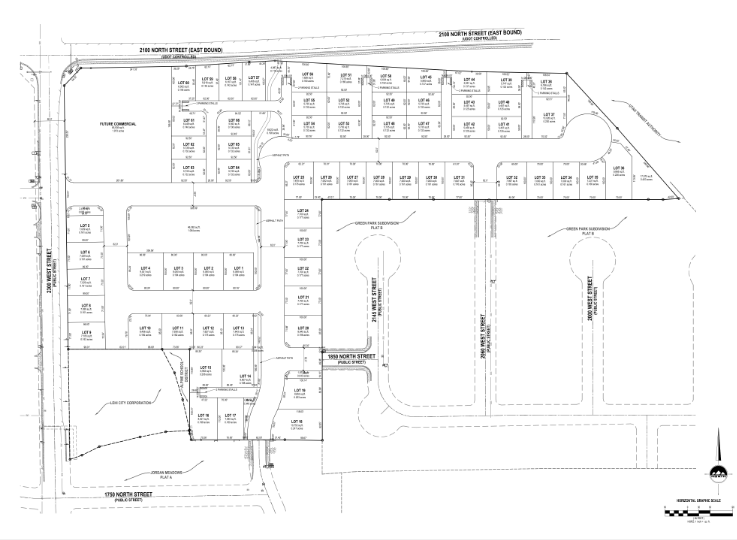 X Development was back before the Planning Commission on June 10 with a new concept on 21 acres at 2100 North 2300 West. In August and September 2020, residents strongly opposed X Development’s plan for a mixture of four acres of Commercial and approximately 95 Residential parcels. The Lehi City Council unanimously denied the zone changes in September 2020 and X Development has worked with City staff and consultants for the last ten months to come up with a new plan.

“This is a complex project. It’s been almost a year since we came before the Planning Commission and we’ve had 20 different versions of this plan,” said Dave Morton from X Development. They’re asking for a PUD (planned unit development) with 66 single family units and a two-acre commercial parcel. In order to get 66 units, X Development must provide an amenity. According to their concept plan, that amenity is a trail that doesn’t connect to any other trails.

“This is the busiest intersection in town, we shouldn’t be adding to it,” said Russ Franklin, a Lehi resident. “A trail that goes nowhere is not an amenity.”

The DRC (Development Review Committee) mentioned the need for access from the development to 2100 North, the same comment they had for the concept plan X Development presented in August 2020. The concept art for the project did not show access to 2100 North. The DRC also expressed serious concerns about the shared driveways in one section where six units share the same driveway. “That’s a nightmare waiting to happen,” commented Commissioner Roger Ellis. Morton assured the commissioners that the arrangement will accommodate garbage trucks and fire trucks.

Commissioner Brent Everett motioned to send a negative recommendation to the City Council for X Development’s request because it doesn’t conform to the existing General Plan, it exceeds the density requirement for a PUD and concerns about access and size of alleyways. The motion didn’t carry with a vote of two in favor, four against. Commissioner Scott Bunker motioned to send a positive recommendation for the zone change to City Council and that passed four to two, Commissioners Everett and Ellis voting no.

CTR Development requested a zone change on 13.05 acres at 1700 West 1500 North from VLDRA (very low density residential agriculture) to VLDR (very low density residential). According to their application, CTR Development “believes that a subdivision development project is only viable if the density is increased to 2.5 units per acre.” The change would result in a maximum of 32 lots, 19 more than they would have with VLDRA.

“For those of us who want animals and this lifestyle, this is a unique place in Lehi. The Planning Commission needs to be our voice,” said Mike Brems, a resident with property adjacent to the proposed development.

“We have very few of these places left, and when they’re gone, they’re gone,” said Commission Chair Abram Nielsen. “We’re not here to justify someone’s bottom line. We’re here to plan the city and develop in a way that makes sense.”

The commissioners voted unanimously to give CTR Development’s request a negative recommendation to the City Council.

ICO Development requested approval for a proposed Ivory Ridge Towns site plan at 100 E Clubview Lane. The concept is 56 rental town homes on 4.02 acres, part of a multi-faceted deal Ivory Homes made with Lehi City when they agreed to develop the Jonsson Mink Farm in December 2019. Ivory Homes also agreed to provide amenities for the additional units.

“These renderings are nothing like what was originally presented,” said Commissioner Heather Newall. “They were three stories with deck-top roofs. It was going to be a really cool product that we haven’t seen in Lehi and now it’s completely changed.”

Taylor Maughan from ICO Development explained that the architecture of the proposed development is designed to be a continuation of what is already in the area. “The rooftop deck didn’t pencil for us, and it was an amenity that didn’t make sense in the area,” Maughan said. The proposed townhomes are two-stories with a basement rather than three stories.

The following items were approved or given positive recommendations:

Alan and Jinhee Thayn’s request for conditional use approval of a flag lot at 1519 N 300 W.

Mad Fab Sign’s request for conditional use for the Lehi Dental Center sign.

DR Horton’s request for conditional use approval of a temporary sales trailer located at 400 W 3600 N.

The following items were tabled at the June 10 Planning Commission Meeting:

Dennis Schoonover’s request for approval of the Lehi Drive Thru concept plan at 600 W State Street.