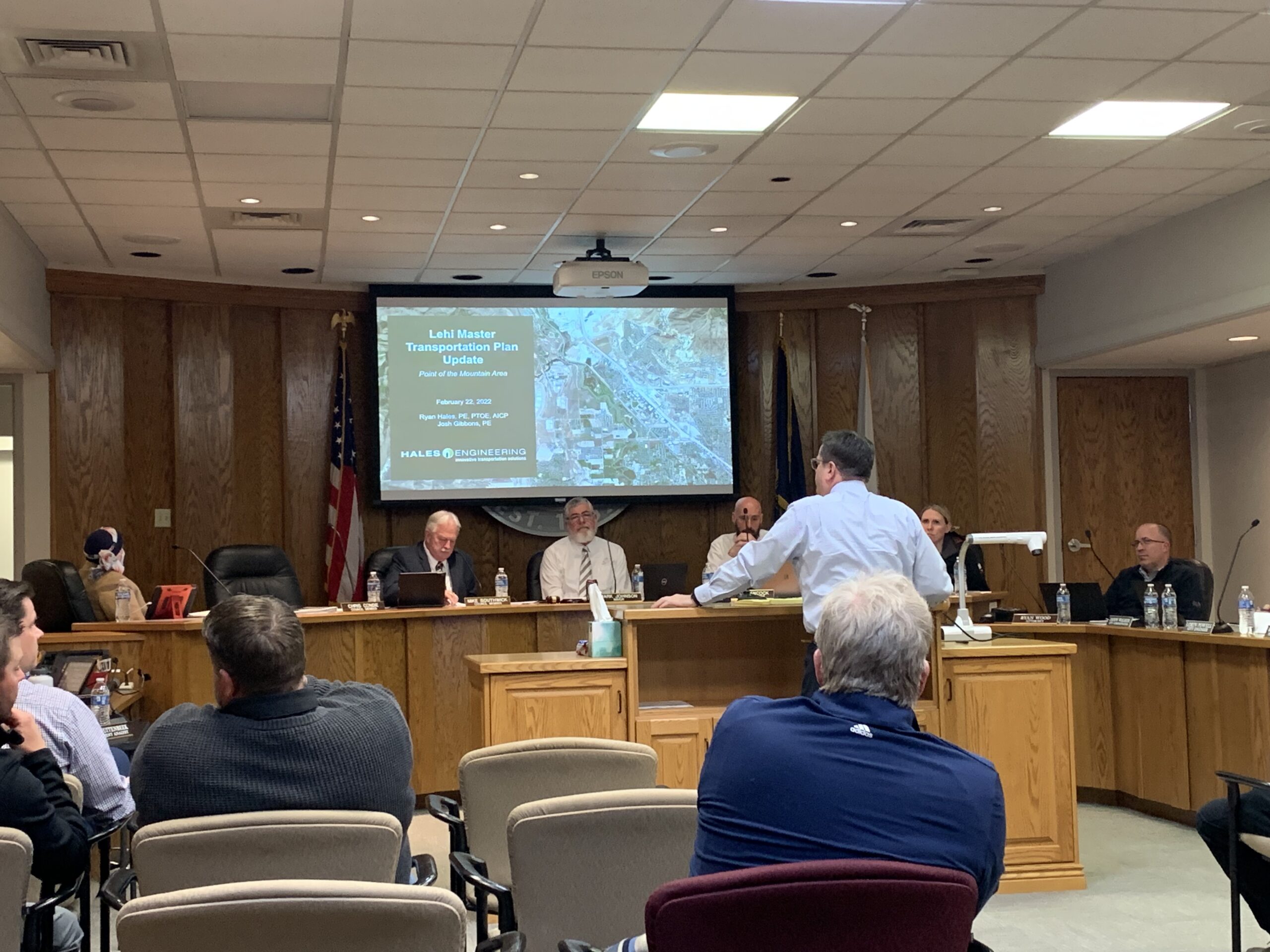 “We’ve been working on this for a long time. When I first took office in 2018, this was the issue I felt most passionate about and it’s taken a long time to get to this point. I’m really excited about this plan.” said Johnson.

The proposed freeway interchange would create a direct access from I-15 to Mountain View Corridor (similar to I-15 to I-80 into Parleys Canyon). The idea presented Tuesday is currently not part of the long-term plan for the Point of the Mountain Commission, Mountainland Association of Governments (MAG) or the Utah Department of Transportation (UDOT).

“UDOT has rejected it because they don’t want to build a high bridge. Fortunately, Lorin (Lehi City Engineer) found a solution to that. We were able to reroute the alignment and find a corridor that is much cheaper to build and function better than we originally planned.” said Johnson in his opening statement.

“There have been reports that the 2100 North interchange would fail without this connector road. In fact, some studies show that 2100 North wouldn’t even need to be built out to a freeway if this road goes in.” continued Johnson.

According to the study presented, the proposed plan would significantly improve Lehi’s most congested areas with the following reduction in daily vehicle traffic:

Although many local roads would see improved traffic numbers, some areas would take a negative hit including an increase of 33,000 vehicles on I15 north of SR92 and 21,000 more vehicles on Mountain View Corridor. I-15 at The Point of the Mountain currently sees an average 180,000 vehicles per day.

“This doesn’t just solve Lehi’s issues. It solves Saratoga Springs, Eagle Mountain, Bluffdale and Draper’s problems too. It solves some of our key transportation problems our neighboring cities are dealing with,” said Johnson during the Council presentation.

The City Council expressed support and positive outlook for the proposed plan.

“I think this is fantastic work.” said Councilman Paul Hancock.

“What can we do to help this move along?” asked Hancock.

“We still have to convince our legislators to fund this road. That is where we’re at with the plan,” said Johnson, who also said he will be meeting with neighboring mayors over the next few weeks to discuss the plan and get additional buy-in.

“We paid for this [study]. We knew we needed a solution. A lot of other cities sit back and put pressure on UDOT or the state to solve their transportation problems. We’ve been trying to solve our own,” continued Johnson.

In addition to the proposed interchange, several other road improvements on the plan are progressing including the Porter Rockwell Bridge which is nearing completion in the fall of this year which connects 14600 South in Bluffdale to Redwood Rd and Mountain View Corridor. Additional long-term plans include the extension of Clubhouse Drive and a connection between Porter Rockwell Blvd and 2100 North.

The City looks to discuss the interchange with neighboring cities, gain their support, then partner with the state to fund and build it.