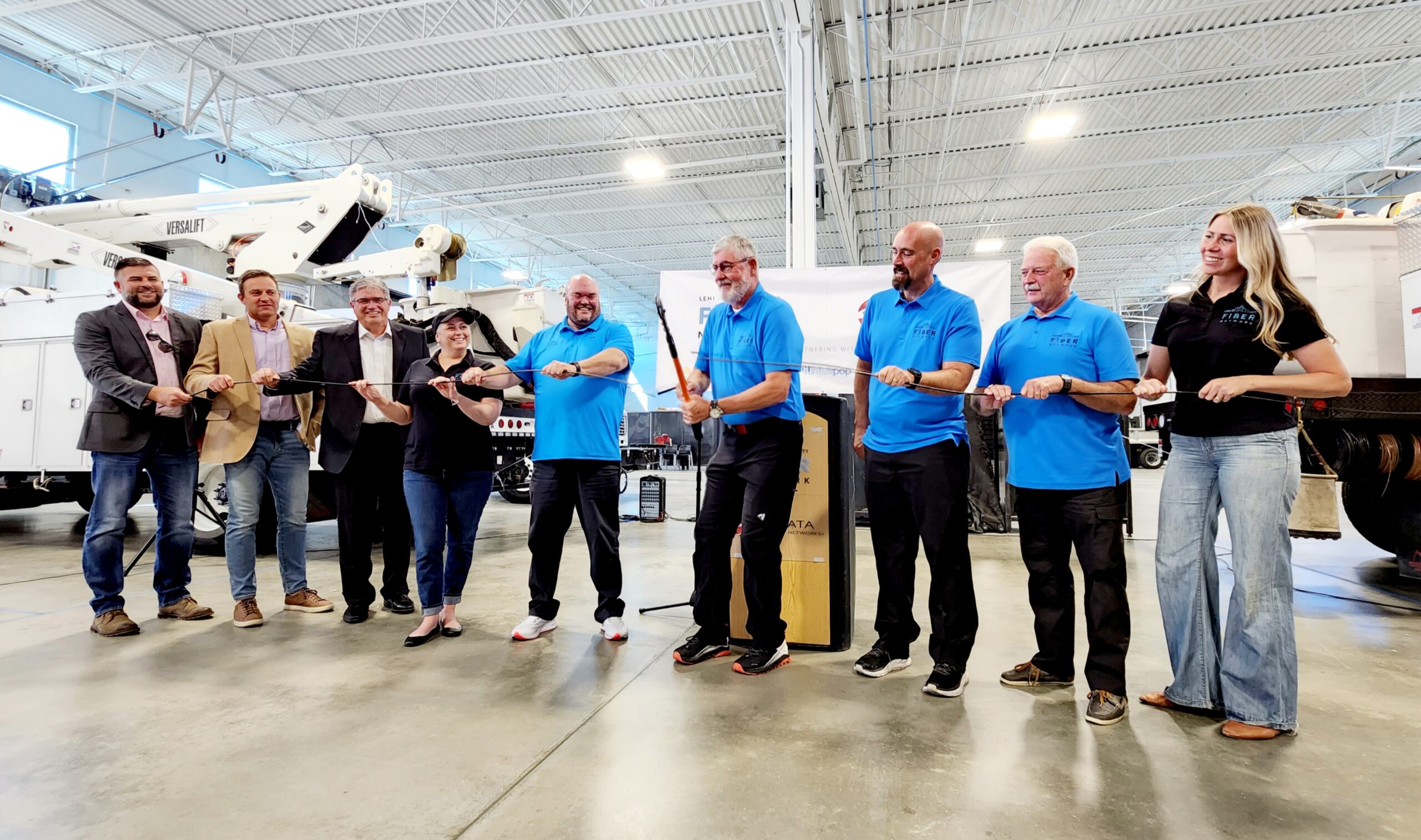 Lehi City officially “broke ground” on a new fiber network on Tuesday, September 6, in a ceremony at the Lehi Power Building.

“We hope you’re as impressed with us as we are with you,” said Bruce Todd, CEO/GM of Strata Networks. “We’ve been involved in the broadband internet industry for over 20 years. Covid changed how we looked at things, it became very important to get internet to everyone and especially school children.”

Strata was at the Lehi City Planning Commission meeting on August 25, and the first two locations were approved there. Strata constructed sheds at 355 N 2375 East and 945 N 200 E, the first two in the “backbone” of structures to be built in the downtown area.

Lehi residents may register online, indicating interest in having their location connected to fiber internet and staying up to date as the project progresses. “The advantage of signing up now is that Strata can determine where the highest demand is, and that’s where they’ll service first,” Johnson explained. “We even have door hangers available at the city offices for people who want to get the word out in their neighborhood. The problem right now is that we’re seeing consistent sign-ups everywhere. I don’t know that there are whole neighborhoods that have signed up yet.” Within the first day of the launch of the registration website, more than a thousand people signed up.

Mayor Johnson and Lehi City officials took a cue from Lehi’s Power Department when deciding how to improve internet connections in town. “The story of Lehi’s Power Department is inspirational,” Johnson began. “In 1925 the mayor of Lehi, Joseph Broadbent, got upset because the company providing power to the city at the time notified them that they were going to increase the charge for streetlights downtown from 90 cents to $3.00 a month. The mayor talked to his city council, and they decided Lehi City needed their own power system.”

Broadbent had city crews unscrew every lightbulb on Main Street and Lehi City went without streetlights for a year while they figured out a new power system. “That was a pretty unpopular decision. Every member of the council and the mayor was voted out in the next election,” noted Johnson.

“I’ve thought about that often. The mayor got upset because money was leaving his town when it shouldn’t have been. He decided that they would figure out how to supply their own power – that’s how Lehi Power started. They figured it out,” Johnson continued. “That we own our power is an enormous benefit to the city.”

Strata has been successful in Uintah County, so much so that some Lehi residents moved to Roosevelt during the pandemic shut down because it was easier to work from home there.

“We were so impressed with Strata’s ability to provide a great fiber network,” said Mayor Johnson. He and other city officials toured the Strata facility before choosing them. “They had their eye on Lehi for years. They want to be in the Wasatch Front. Lehi will be the first city in Utah County for Strata, but we won’t be the last. Lots of cities are watching to see how this goes.”

The most significant benefit, according to Johnson, was keeping everything in Lehi. “We own the system. They’re our contractor to manage the system,” he explained. “They have the NOC (Network Operation Center), and they’ll monitor the system 24/7. Because it’s a wholesale program, there are several ISPs on the system to choose from. You get to pick the plan you want, and if you’re ever unhappy, you can switch. It will be competitive pricing.”

Substantial completion of the fiber network in Lehi is scheduled for May 2025. “In less than three years, we should be pretty much done in the entire city,” said Johnson.