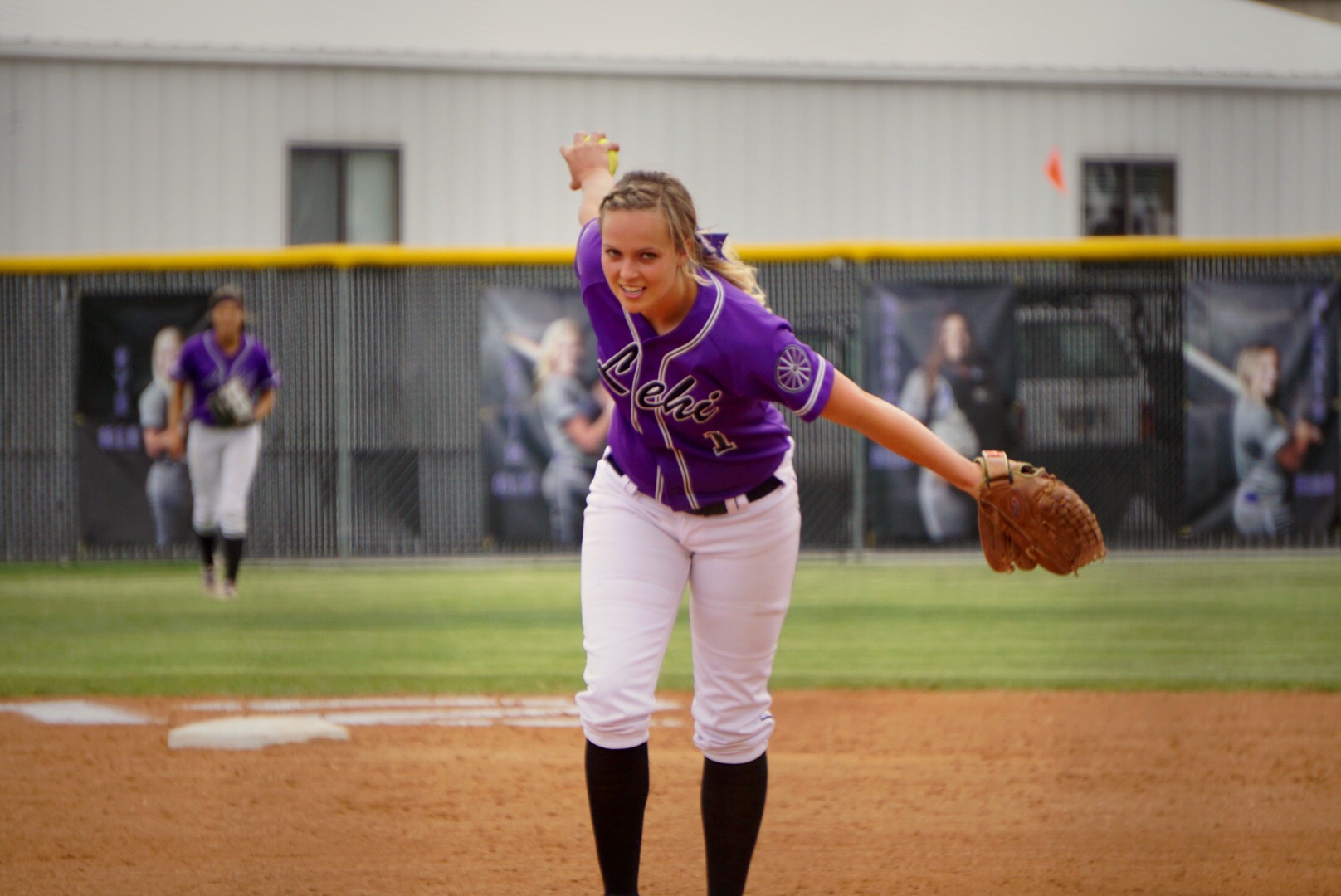 The Lady Pioneers took on the Silverwolves of Riverton in a region battle for first place at Lehi’s home field.  This game was a pitcher’s duel with neither team getting a hit until the third inning.  Emme Cluff was the first pioneer to get a hit but neither team was able to put a run across the plate.   The Lady Pioneers were able to get on the board in the bottom of the sixth inning with a leadoff single to left by Syd White.  She was followed by Bailey Tahbo’s bunt to advance her to second but Riverton committed their first error of the game by overthrowing the ball to first. Syd White and Bayley Tahbo scored on an errant throw. The score was 2 to 1 for the Pioneers. One more run scored making the score 3 to 1.  That was all the scoring the Pioneers had and all that they needed.

The Silverwolves strung a couple of hits together in the top of the seventh to give them one run but not enough to overcome the deficit.  The Lady Pioneers went on to win 3-2 with Stefani Zimmerman getting the win on the mound.  They will need to win both of their region games this week to hold on to that lead.  If they win both they will enter the state tournament as the number one seed from our region with the first game of state being played on May 17th.

The Pioneers had a non-region game against the Spartans of Murray this past Monday on Lehi’s home field.  The Spartans came in riding a 13 game win streak but 13 turned out to be an unlucky number for the visitors from Murray.  Lehi started off their scoring in the bottom of the second inning with a solo home run by Stefani Zimmerman giving the Pioneers 1-0 lead.  The next score for Lehi came in the bottom of the fourth as Rylin Roberts made it to first on a dropped third strike and an error by the catcher.  She then advanced to second as the throw to first was wide.  Stefani Zimmerman then came up to the plate and blasted her second home run of the game to give the Pioneers a 3-0 lead.  Syd White started off the fifth inning with a single to left.  Bailey Tahbo then stepped into the box and hit a deep shot into right field right down the line.  She made it to third and Syd scored.  Rylin Roberts came up next with a hard shot to left center scoring Bailey and getting a double in the process.  On the throw from the outfield towards home plate Rylin advanced to third.  Stefani Zimmerman was next with what looked like her third home run of the game but it was just short of the fence and was caught but Rylin was able to score on the sac fly giving the Pioneers a 6-0 score at the end of the inning.

The Pioneer women started off the sixth inning with another home run.  This one was by senior second baseman Abby Padilla.  The score was now 7-0 and that is how the game would end.  The Murray team managed 7 hits for the game but was never able to string them together for any runs.  The defense for Lehi came up big in this game with some great catches in right field by Kayla Roberts and Savannah Heaton at first who manages to stop just about everything that’s thrown to her.

The Lady Pioneers have two home games this week to finish out the regular season.  Tuesday May 10th they will face the Herriman Mustangs and Thursday May 12th against the Knights of Lone Peak.  Both games are at 3:30 at the high school softball field.  The Thursday game will also be senior night celebrating the last regular season home game for Lehi’s seven seniors, Brogan Kirby, Syd White, Rylin Roberts, Stefani Zimmerman, Abby Padilla, Emme Cluff and Alexis Leavitt.