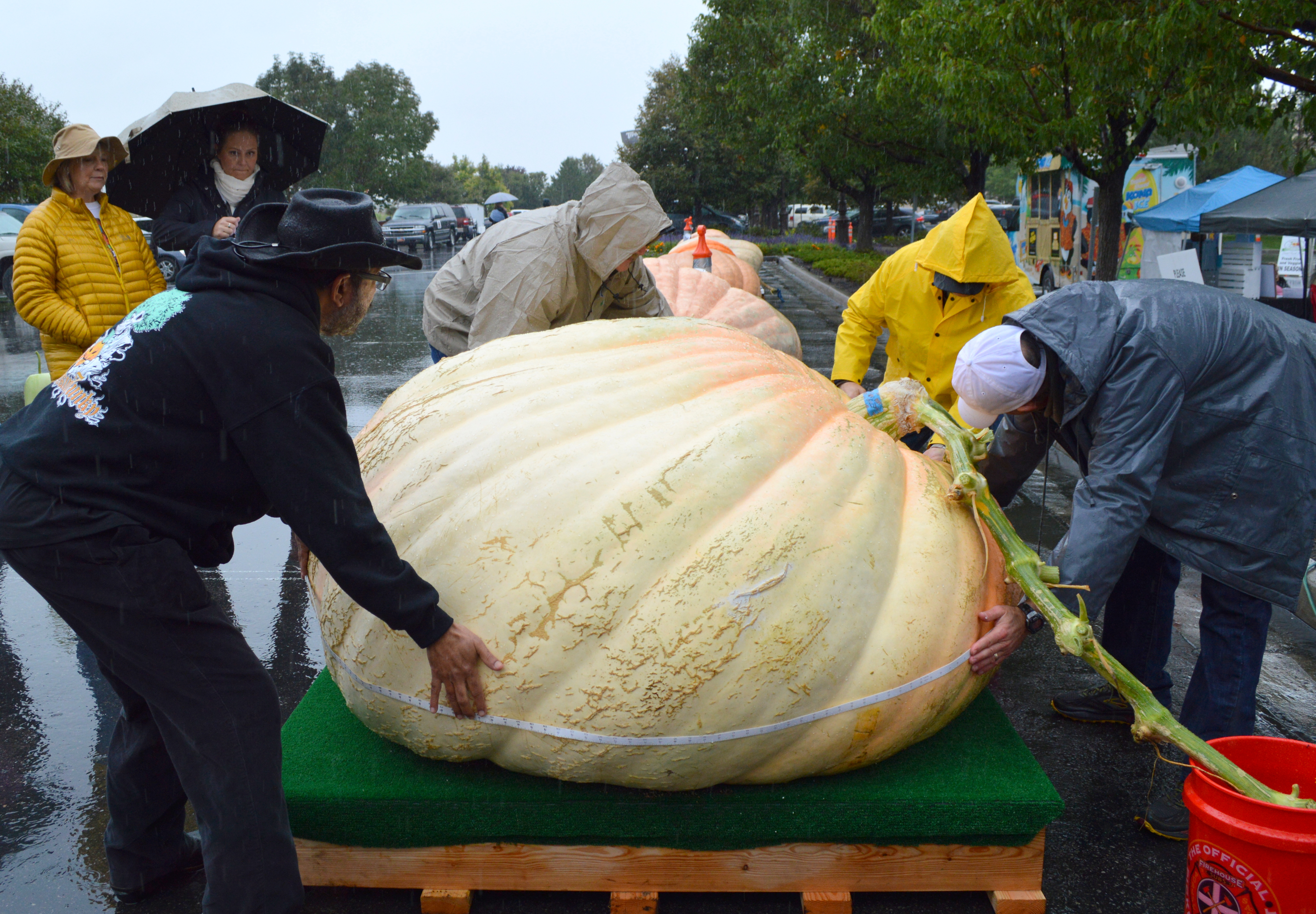 A rare down-pour didn’t worry the giant pumpkin growers at the Harvest Festival on Saturday, September 24, at Thanksgiving Point. The parking lot east of the water tower had a row of giant pumpkins and other “alternative fruits” on individual pallets. Members of the Utah Giant Pumpkin Growers Committee stopped at each pumpkin to take three measurements; north to south, east to west, and circumference. Carrie Fox held an umbrella and a notebook, taking down the measurements. When asked if the shape of the pumpkin is taken into account, Carrie said, “We don’t care what they look like, we just want them to be big!”

Committee Head, Kyle Fox (husband of Carrie Fox) describes the Giant Pumpkin Growers as a “weird little cult.” The members only see each other a few times a year, but they are like family and they always have plenty to talk about. The Foxes didn’t grow a pumpkin this year because they were “growing a baby” and a new house. Pumpkins take a lot of time and care. Alan Geberg, a computer programmer from Cache Valley, had a giant pumpkin he was sure would be a record-breaker, or at least his personal best, growing in his patch all summer. The pumpkin got to about 800 pounds, but then it went mushy. “It’s the nature of the beast,” says Geberg. He’s got a smaller, 500 lb. giant pumpkin that will be perfect for the pumpkin regatta in South Jordan next month.

The biggest of the giant pumpkins at this year’s weigh-in was clearly Ed Dennis’s. Dennis is the CFO of Deseret Trust and he lives in Highland. He and his wife were traveling in Connecticut eight years ago when they saw a giant pumpkin outside a restaurant. Something about that pumpkin spoke to them. For his next birthday, Dennis’s wife gave him a membership in the Utah Giant Pumpkin Growers. The first pumpkin Ed Dennis grew from the seeds that came with his membership, weighed 91 lbs. He’s been able to double the weight of his giant pumpkins every year until this year.

In 2016 Dennis changed his watering system, added perlite and an injection system that delivered fertilizer to the pumpkin every time it was watered. He and the other giant pumpkin growers agree, though, that success is “90% luck and 10% skill.”

The giant pumpkins were displayed on Saturday, with the weigh-in at the end of the day. It rained most of the morning, which made the giant pumpkin growers happy. When pumpkins are dehydrated, they don’t weigh as much. As predicted, Ed Dennis ended up winning the giant pumpkin weigh-off with his massive squash tipping the scales at 1491.5 pounds, a personal best, and 500 pounds bigger than the second place finisher.