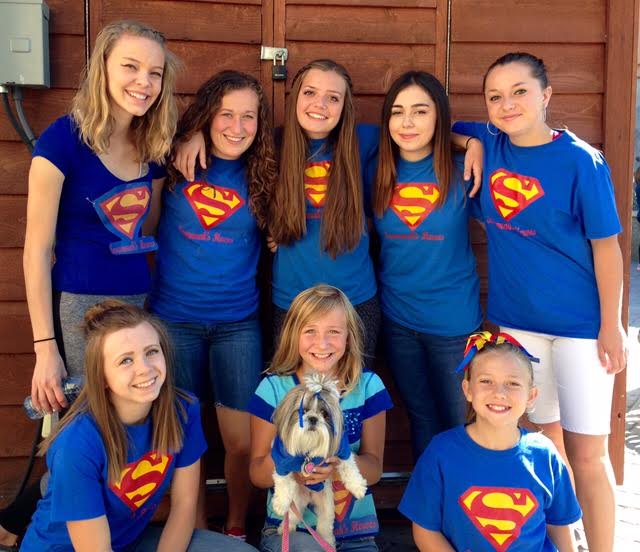 Savannah Taylor was one of those little girls who wanted to keep the rules and participate in everything. One Sunday when Savannah was four years-old, she made half a dozen trips to the drinking fountain and bathroom during one hour-long church meeting. Savannah’s parents, Andrea and Zach Taylor were concerned. Andrea, who has Type 1 Diabetes, hoped desperately that Savannah was just being a little naughty. Zach wanted to check Savannah’s blood sugar because he suspected it was high. The normal range for blood glucose levels is between 70 and 99 mg/dl, but four-year-old Savannah’s blood glucose was over 500 mg/dl that Sunday and unfortunately her parents’ fears were realized; Savannah was diagnosed with Type 1 Diabetes.

The Taylor family was already aware of the warning signs of Type 1 Diabetes (formerly known as Juvenile Diabetes), a chronic condition in which the pancreas produces little or no insulin, when little Savannah was diagnosed with it 13 years ago. The Juvenile Diabetes Research Foundation (JDRF) sent a volunteer representative to the Taylors to give them a “Bag of Hope,” a gift to educate them and give them a glimpse of a positive future.

Symptoms may occur suddenly and may include:

A simple blood sugar test from a single drop of blood can screen for this disease and can save lives.

Unlike Type 2 Diabetes, there is no known cause or cure for Type 1 Diabetes and it strikes children and adults regardless of their lifestyle or genetics. Andrea and Savannah Taylor later became volunteers for the JDRF themselves, going to hospital rooms of children recently diagnosed with Type 1 Diabetes together to deliver a Bag of Hope and show them they could still do all the things they loved while managing the disease.

The Utah-Idaho Chapter of the JDRF estimates that they will deliver 600 Bags of Hope to children in Idaho and Utah this year. The number of cases in North Utah County has been steadily increasing the last few years. Approximately 40,000 children and adults are diagnosed with Type 1 Diabetes every year in the United States. Mike Somers, Executive Director of the Utah-Idaho Chapter of JDRF, notes that we could have 5 million people with T1D by 2050 if we don’t find a cure.

When Savannah was seven years old, she and her cousins were in Page, Arizona, and her Uncle Rob Tubman took all the kids out for snow cones. Tubman knew Savannah was diabetic, but he had no idea what a simple snow cone on a summer day could do to her. Savannah went into diabetic ketoacidosis, and started vomiting and having trouble breathing. They were able to keep Savannah from going into a diabetic coma and she recovered quickly, but the incident shook her Uncle Rob. When Tubman’s boss at Antelope Point Marina in Lake Powell was looking for a charity to support in conjunction with an event that would extend the season at the marina beyond Labor Day, Tubman suggested the JDRF.

A fast boat in the Lake Powell Challenge, a fundraiser for the JDRF. Photo courtesy of the Taylor family

In addition to the Lake Powell Challenge, the JDRF hosts fun walks in Utah County and Salt Lake County in September. This year the Utah-Idaho Chapter of the JDRF raised an estimated $800,000 for T1D research. Right now, 80% of their raised funds go toward their mission – to cure, prevent, and treat Type 1 Diabetes.

Savannah Taylor wears an insulin pump with a continuous glucose monitor (CGM) all in one device which is attached to her all the time. Extending from the device at one point is a wire leading to a sensor under her skin which is constantly reading her blood sugar levels. Also extending from the device is a tube delivering the correct amount of insulin to her body. She had to get special permission from the FDA to wear the pump because she is under 18 (for a few more months). In 2011 Savannah represented the Utah-Idaho chapter of the JDRF as a Youth Ambassador in marching on Capitol Hill lobbying for research and funding for Continuous Glucose Monitoring (CGM) in the United States that year. (Children with T1D were already using CGM around the world, but it had not been approved by the FDA in the United States.) The JDRF was successful and in 2013 their bill was passed. Before she got the CGM, Savannah would have seizures during the night when her sugars got too low.

It has been 13 years since Savannah Taylor was diagnosed with T1D. What started out as a scary disease that would limit her potential has become her defining crusade. She has educated other children and their parents about T1D and inspired strangers to do their part in finding a cure. Savannah plans to get a degree in Communications with an emphasis in non-profit. She hopes there is a future for her working for the JDRF and continuing the fight to eliminate Type 1 Diabetes. To donate money or time, go to http://www.jdrf.org.