Students step back in time with visit to Topaz 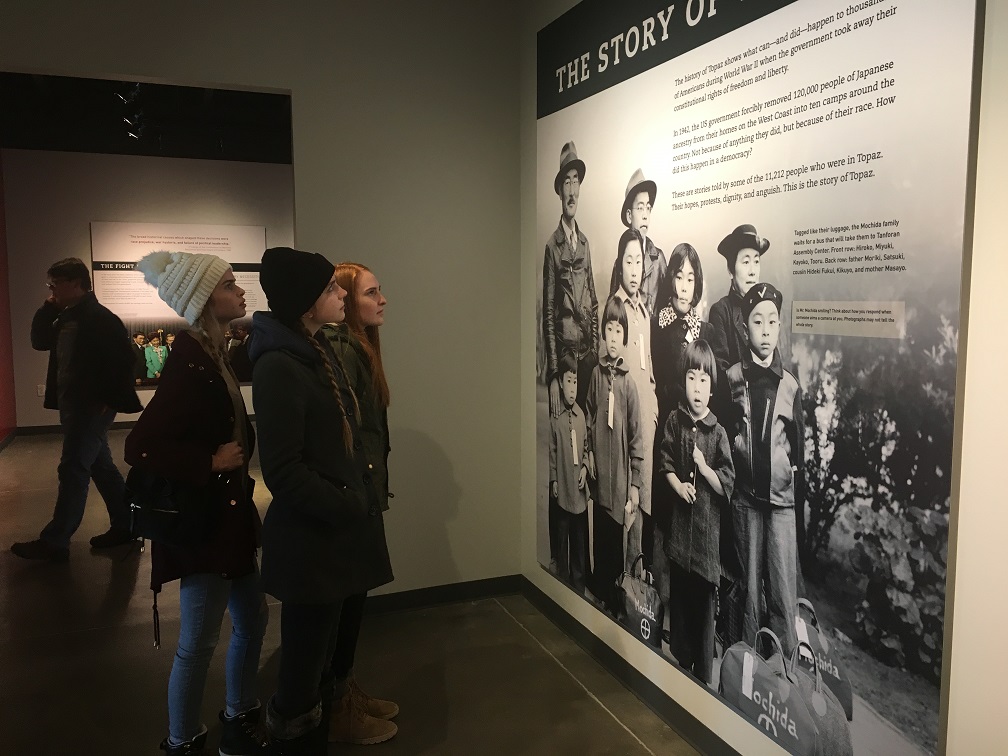 There’s no better way to experience history than in person. That’s what the teachers of the American Studies classes at Skyridge High School were thinking when they arranged for their students to visit the Topaz Museum in Delta last week.

“We were studying WWII, first the war in Europe, then the Pacific … and now how the war affected people at home,” said history teacher Jamie Ingersoll. “Trips like this allow us to put a personal spin on something that seems so far away.”

When students can touch furniture, tour homes, read stories and see paintings, history comes to life. “You can’t read that in a book,” said Ingersoll. “Seeing with your own eyes makes all the difference.”

When the Japanese bombed Pearl Harbor on Dec. 7, 1941, war-time hysteria, poor leadership, and racial bias led to the internment of West Coast residents of Japanese descent. Utah’s Topaz internment camp was among the largest created.

Just last year, the Topaz Museum opened with a commitment, “to preserve the Topaz site and the history of the internment experience during World War II….” Museum docent Julia Sharp said, “The museum is a wonderful place to learn about an almost hidden history of Utah.” With thought-provoking displays to rival those of any big city museum, Topaz’s underlying theme is to be kind. Sharp said, “We need to learn from the past and how kindness is very, very important.”

Although 19,000 acres were set aside for the camp, which is located outside of Delta, the 8,000 Japanese residents who lived there at any one time, lived in one square mile of barracks divided into 42 blocks. Because the detainees were only able to bring what they

Skyridge juniors Catherine Bangerter, left, and Kelby Cook view the Central Utah Final Accountability Report, which is a full listing of the 11,212 internees who came to Topaz between 1942 and 1945.

could carry, they had to make their own cribs, chairs, beds, dressers and so forth from any scrap wood they could find.

The Skyridge students were able to tour an actual 20-by-26-square-foot building with no cooking facilities that once housed a family. “I liked how you see it one way in your mind and then it’s different,” said junior Seth Chatwin. He had pictured the living quarters to be, “more confined,” than they were. Although the tiny homes/buildings were more shed-like than anything else, they bore little resemblance to a prison cell.

At the camp, there were two elementary schools, one high school (7-12), adult education and art classes and two libraries, one with English books, the other with Japanese.

“I liked how the museum showed how good they were with dealing with how little they had,” said junior Kelby Cook. In their recreation halls, which were also little more than large sheds, detainees held Boy Scout meetings, weddings, co-ops, church and more. Every block even had its own baseball team.

Looking at a life-size photo featuring a family in the camp, Sharp explained that before the war, the family had their own greenhouse in which they worked very hard. Unlike most everyone else at the camp, one of the teenage daughters in this family had liked being in the camp—because she didn’t have to work like she had at home. She could be with friends, go to the movies and participate in all social gatherings because there was no work to be done.

Others never recovered from the devastation they felt from being moved to the camp, not to mention the physical trauma. The desert winds constantly blow alkali dust in the dry months and freezing winds in the winter. They fought dust year-round as well as the deadly heat in the summer and extreme cold in the winter. It was a hard, dirty existence.

The students were not able to go to the actual campsite due to inclement weather.