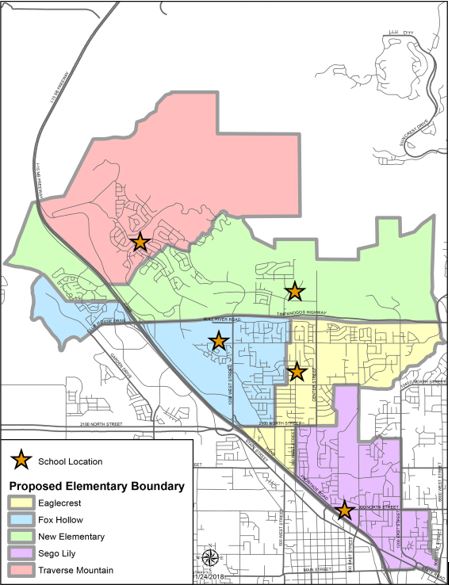 After many months of study, public input and adjustments, the school board approved boundary realignment as shown in the attached drawing.

Thousands of parents from the schools feeding to the new elementary school participated in this process and shared sincere input on their concerns ranging from academic needs, social and emotional needs to school size and capacity, portable classrooms, parking, traffic, and pedestrian safety.

Comments received from Eaglecrest families overwhelmingly indicated that they were fine and that their school had the capacity for the current population but did not have room to continue to grow. They requested to not have any division in their current school students.

Comments received from Fox Hollow families almost all requested that their population be reduced somehow, that the school could not handle the current student population or the projected growth and that it had to be divided.

Comments received from Traverse Mountain families all expressed tremendous love for their school and generally asked that if they lived only a few blocks from the TME that they be able to continue to walk to TME and not be bussed to the new elementary school. Those who live closer to the new elementary school are excited for their new school to open this coming August. All are anxious for the current crowding at TME to be resolved.

Sego Lily has been on a gentle decline in student population over the last few years and is projected to continue that decline as the current families in the boundary age and their students move to junior high and high school. Sego Lily is pleased to have the Vivian Estates subdivision, which is just beginning construction, added to their boundaries to maintain a stable student population.

It is expected that ASD will announce the new principal for the new north Lehi elementary school this week and that she will be able to begin organizing parent committees immediately and start planning for school name, colors, and mascot this spring. The new principal will work with the existing principals in the feeder schools and will begin hiring teachers and staff over the coming months.

We are excited for the schools that we are able to build with the bond money approved by ASD voters in the 2016 elections. We have two or three more schools that we anticipate building in Lehi over the next three or four years to address the continued growth throughout Lehi. We recognize that this will bring about more boundary adjustments for those new schools and we look forward to participation from families in those processes as well.

Students step back in time with visit to Topaz