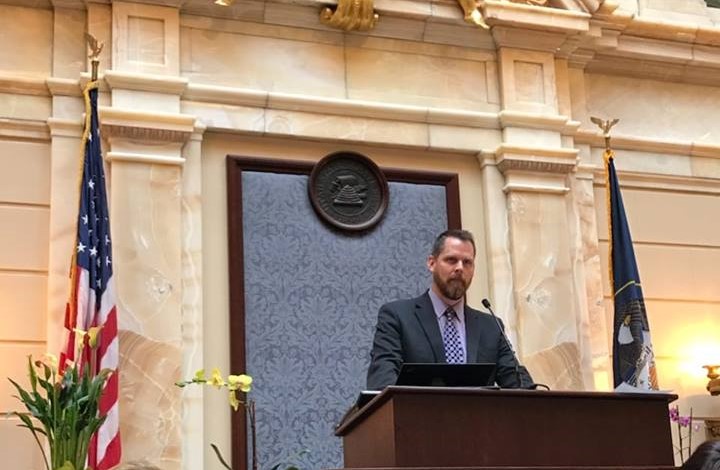 As the second week of the legislative session concluded, Lehi legislators reported several bills moving through the House and Senate. One of Representative Cory Maloy’s (House District 6) bills drew widespread media attention after it received vocal opposition in its House hearing.

Maloy’s HB 129, “Self-Defense Amendments,” clarifies that an individual is not required to retreat from an aggressor. While many believe this is the intent of Utah’s “Stand Your Ground” law, experience has shown that individuals who defend themselves from aggressors and end up in court, sometimes find themselves harassed by attorneys questioning why they didn’t flee instead of defending themselves.

“It’s all about the right to defend yourself and not be victimized later in court,” Maloy said. “If you’ve had to defend yourself, you’ve gone through a traumatic experience. And then you end up in court and you have people saying, ‘Well, why didn’t you run away? Why didn’t you retreat?’ It continues that cycle of victimization.”

But many who spoke at the hearing didn’t see it that way. In a hearing that lasted nearly an hour, four groups expressed their opposition to Maloy’s idea. “This bill will disproportionately affect people of color,” said Margarita Santini of the Utah Pacific Islander Health Coalition. She expressed concern about people becoming vigilantes under the bill.

Kait Hinckley of Moms Demand Action echoed the vigilante concern. Elizabeth Love of The Gun Violence Prevention Center of Utah said the bill was unnecessary because the current Stand Your Ground law is sufficient, and Scott Hayashi of the Episcopal Church shared the same view.

The bill was passed out of committee on a 7-3 vote split along party lines, with all three Democrats voting against.

The bill has been reported on by news outlets throughout Utah and by gun rights organizations across the country.

While his self-defense bill has drawn a lot of attention, Maloy has also been working steadily on a bill to protect emergency response recordings so they can be used for training purposes. The bill, HB 56, has made quick progress, passing the House and clearing the Senate committee in just two weeks.

Representative Kay Christofferson (House District 56) reported the passage of his first bill of the session with HB 26, which allow private donations to be used for public education on traffic safety and for outreach programs. The bill was recommended by the Transportation Interim Committee.

Two other bills made progress. HB 104, “Child Welfare Services Amendments,” passed the House and the Senate committee and will next be considered by the entire Senate. HB 226, which addresses regulation of municipal officers, passed the House committee.

Christofferson’s most hefty bill, HB 202, has been introduced is waiting to receive a fiscal note before it can move forward. The bill seeks to eliminate the tax incentive program of the Governor’s Office of Economic Development, including the motion picture tax incentive. It also deals with a handful of other tax incentive items.

Christofferson said he’s eager to spark discussion about tax incentives. “Whether or not it passes it should get the conversation going,” he said.

Two bills sponsored by Senator Jake Anderegg (Senate District 13) were introduced during the first week of the session but made no progress this week.

SB 146 would provide a tax incentive for the recently inaugurated Silicon Slopes Convention Tech Summit. It carries a fiscal note of $1 million. SB 66 deals with regulations for emergency vehicle operators. It was scheduled for a hearing on January 29 but was not considered.

Anderegg reported in his weekly video update on three bills considered by the Senate.

One of them was a concurrent resolution to replace the statue of Philo Farnsworth which stands in the U.S. Capitol to represent Utah with a statue of Martha Hughes Cannon passed the Senate, receiving a “yes” vote from Anderegg. The resolution will move to the House for consideration.

“Pancakes and Politics,” a town hall meeting with state legislators from north Utah County and the area’s state school board representative, will be held at American Fork Hospital on Saturday, February 24 at 9:00 a.m. The meeting is sponsored by area Chambers of Commerce.

Missouri Star Quilt Company to make a stop in Lehi

You don’t have to live with chronic pain