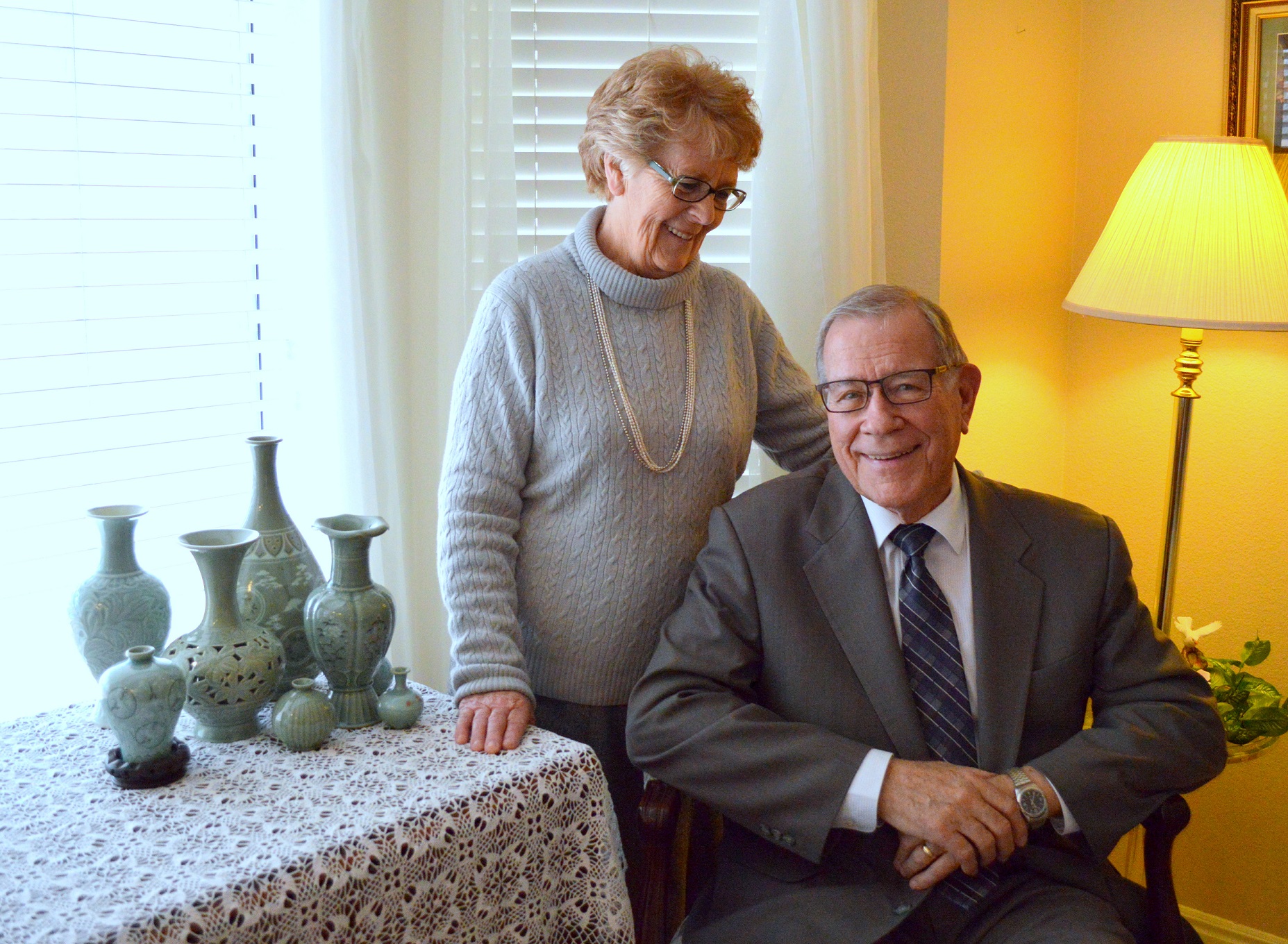 When the cameras pan across the trees and mountains of Korea between Winter Olympic events on TV, Ed and Carol Brown remember school children trekking into the mountains to plant those trees in the early 1970s, replacing the ones that had burned during the war in the early 1950s. “It feels like home to me,” Carol Brown told a friend who asked why she looked forward to going back to Korea.

Edward Brown was the 12th missionary from The Church of Jesus Christ of Latter-day Saints to be called to Korea (at the time the mission included all of Japan and Korea) in 1957. Brown and his companions visited war-ravaged villages where families were living in shacks made of corrugated metal. The Korean people were always happy to see Americans. “We could get into every house,” Brown remembered. “The Korean people were so grateful to America. We had 29,000 killed over there and another 58,000 wounded, not to mention prisoners of war. America really paid the price in that country and they appreciated it.” Brown spent two and a half years there as a young LDS missionary. “The U.S. servicemen saved us in the fifties – they brought us cots to sleep on and food. They were so good to us.”

After he got home in 1960, Ed Brown married Carol and they started their family that would eventually include six girls and two boys. Ed got his doctorate at the University of Utah and began a career with the LDS Church’s education department. While still in his twenties and working with the LDS seminaries on Indian reservations in South Dakota, Brown had a vivid and specific dream – Elder N. Eldon Tanner of the First Presidency of the LDS Church called and asked Brown to serve as a mission president in Korea. Six years later Ed Brown got a phone call during a break in teaching classes at the Idaho State University LDS Institute, it was Elder N. Eldon Tanner. “Brother Brown, we’d like you to be a mission president in Korea,” Tanner said, getting right to the point. Brown was only 34 years old at the time and Carol was taking care of four very young children at home, but it was easy to say yes.

From 1971 to 1974 Ed and Carol Brown lived in Korea, managing the business of a mission that consisted of 150 young men and women. Ed Brown had only been away from the country for 11 years and he found the conditions in Korea had improved, but they were still doing things the way their ancestors had. Most of the people still lived in thatched-roofed houses and didn’t enjoy many modern conveniences, including refrigeration. “There weren’t many Mormon families in Korea at that time. The people were so welcoming to our family. It was the right time to have a Mormon family of young children sitting quietly at church,” Ed Brown remembered. One of the Brown’s daughters has red hair and the Korean children, and sometimes adults, would touch her hair and marvel at the color. While walking on the beach in Pusan, Carol Brown was approached by a group of women who wanted to know how Carol made her hair red.

Unlike China and Japan, Korea had accepted Protestant and Catholic missionaries into their country during World War II. By the end of WW II, between 20 and 30 percent of Koreans were Christians. “They had this Christian influence that made them more receptive to the spirit of the Holy Ghost,” Ed Brown explained. The opening ceremonies of the 2018 Winter Olympics featured symbols of Korea’s ancient culture, including the importance of the tiger, which is a sign of protection for them. The dragon is a symbol of luck in Korea. “The older generation is very deeply rooted in the past. They’ve been a nation for more than 4000 years! The kids, though, are not as steeped in that tradition. Korea has embraced technology completely,” said Brown. “Education is terribly important to Koreans. They dedicate their lives to it, they’re very disciplined,” added Carol Brown.

In 1996 Ed Brown was in the Quorum of the Seventy and he moved his family, by then only their youngest daughter still lived at home, to Tokyo, Japan. The Browns traveled to Korea often during their five years in Japan. In the more than 20 years since they had left Korea, all the thatched-roofed homes had been torn down to make way for high-rise apartment buildings in the villages. The 1988 Summer Olympics took place in Seoul, Korea, and it was important for them to show the world how advanced they were. The landscape and the people had entered the modern world.

The impact Korea has had on the Browns’ life is not easy to measure. They have a collection of celadon, a style of pottery only made in Korea, on display in their home, along with other gifts and treasures they’ve brought back. Ed and Carol Brown glow with pride when they talk about the “young men” (now in their sixties) who were their missionaries in Korea. They keep in touch, still holding the occasional reunion. The Browns and their children love Korean food – their children even request it for Thanksgiving dinner. Carol Brown learned how to make a version of kimchi because she loves it so much. The Browns thoroughly embraced the Korean people and culture. The 2018 Winter Olympics in Pyeongchang, Korea, have provided them a sweet glimpse at the country they love so much.