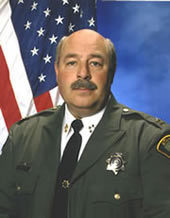 Tracy indicated that the driving issue for the financial situation is the strain created by medical bills for one specific inmate amounting to over $800,000. Tracy said the jail’s account was being sent to collections, the jail doctor had not been paid and would not be paid in the next pay cycle, and that he needed to let between 15 and 20 deputies go and release 128 inmates in order to cover the shortfall.

“Our immigration policy in the United States has failed us,” said Commissioner Lee. “We’re seeing the rippling effects of that right now.” He said the inmate has a long history of involvement with law enforcement, including multiple convictions. He fell sick while awaiting arraignment at the Utah County jail and that makes Utah County legally responsible for his medical bills.

Lee pointed out that this situation could completely bankrupt a smaller county.

While the Sheriff said he’d had no email responses to the five emails he had sent over the course of two months regarding the situation, both commissioners said they had been speaking with him about the issue during that time and thought there was shared understanding of the situation.

Last month, Lee hand-delivered a letter about this particular case from Sheriff Tracy to the Trump administration when he met at the White House with other county commissioners and state legislators from Utah. Among those at the meeting were Vice-President Mike Pence and U.S. Secretary of Energy Rick Perry, along with chiefs of staff and directors of various departments. The meeting was part of a Trump administration effort to reach out to county and state leaders for input on local and state issues.

Lee said he shared the letter with everyone he could and the situation was discussed at the meeting.

“There was no need for this at all,” Lee said of Tracy’s resignation, noting that Tracy has wanted to raise taxes for quite some time and his resignation announcement may have been a move to prompt that. Lee said he had asked Tracy to show him the collections notice but had not seen one.

Commission Chair Nathan Ivie called the resignation announcement a “blind side,” saying, “We’ve had conversations with him about it, we are aware of the situation. We knew at some point in time we would have to open the budget, we had talked with our financial people about that, starting the process of trying to find funds.”

Ivie also expressed frustration with the dynamics of the situation. “It’s a perfect illustration of the failure of the federal government to properly pass and enforce immigration laws.”

The commissioners met with the sheriff on Friday morning and arranged the transfer of money in order to cover the expenses. Expressing appreciation for Tracy’s service, Ivie reported on Facebook, “Had a great meeting this morning with the Sheriff and he is transferring funds to cover current cost incurred because of the inmate with the expensive medical condition. We will be opening the budget, as planned, to replenish the accounts and ensure he has the funds to keep the jail operating.”

Because Tracy was elected on the Republican ticket, his replacement will be chosen by that party. The Chair of the Utah County Republican Party, Rob Craig, said he received Tracy’s official notice of resignation on Friday, July 6.

While the formal process directs that the Party will accept nominations after the public official’s resignation, which will take place on August 3, it is generally expected that the replacement will be Mike Smith, who just won the Republican nomination in the primary election in June and faces no opponents for the general election in November.

Craig said this particular case is prompting the party to consider a bylaw change which would make the Republican candidate the default nominee in future cases where a public official resigns after a candidate has been chosen in convention or through a primary. This would save time in the replacement process for both the party and the public.

Craig expects the party’s County Central Committee to vote on the proposed change at its meeting in September.

Tracy was out of the country and unavailable for comment.