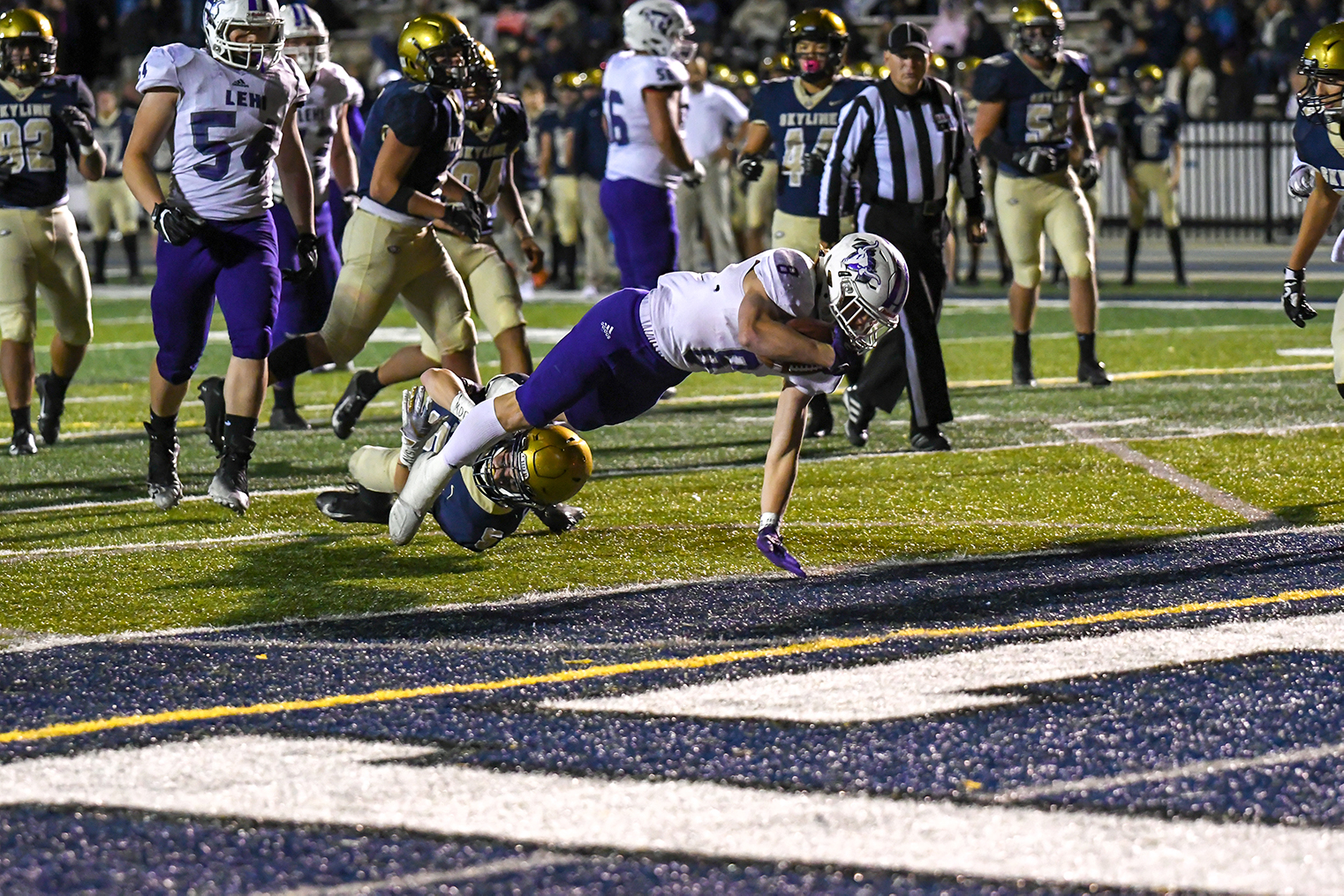 The Lehi football team dominated the Skyline Eagles, 42-7, Wednesday night on the road in the final game of region play. The Pioneers scored early and often on their way to a convincing victory. Lehi’s defense also controlled the game, giving up no touchdowns. Skyline’s only score came on a kickoff return in the second quarter.

The Pioneers received the ball to start the game. Oakley Krumvieda returned the opening kickoff to near midfield giving Lehi excellent starting field position. The offense moved the ball down the field with runs by Carsen Manookin and a 25-yard pass from Creyton Cooper to Gentry Cox. Manookin put the Pioneers on the scoreboard with an 8-yard run up the middle. On Skyline’s first possession, the quarterback was being pressured in his own end zone by Jacob Vasquez and Brayden Larsen when he threw the ball over the middle of the field. Maoputasi Young was on coverage and jumped, high-pointing the ball in front of the Eagle receiver intercepting the pass at the Skyline 25-yard line. A couple of plays later, Carsen Manookin scored an 18-yard rushing touchdown – delivering a punishing hit to the defensive back attempting to tackle him at the goal line.

Skyline turned their next possession over to Lehi on downs at the Pioneer 38-yard line. The Lehi offense wasted no time moving the ball when Sophomore quarterback Creyton Cooper connected with tight end Trey Andersen for a 34-yard pass into the red zone. Next, Manookin caught a Cooper pass in the flat, spun around toward the middle of the field losing his defender and sprinted into the end zone, untouched for an 11-yard score. On the Eagle’s next possession, Oakley Krumvieda intercepted a pass and returned the ball to the Skyline 34-yard line to end the first quarter.

Defensive back Oakely Krumvieda (1) runs after intercepting the ball late in the first quarter. | Douglas James

At the start of the second quarter, Cooper rolled to his right and completed a pass to Jaden Greenwood in the middle of the field. On the next play, Carsen Manookin scored his fourth touchdown of the night on an 11-yard rush. The next five possessions went as follows: Skyline punt, Skyline interception, Skyline punt, Skyline interception, Skyline turned possession over on downs. The Pioneer offense got things going again when Creyton Cooper hit Gentry Cox on a slant up the middle of the field. Cox outran and juked Eagle defenders to score an amazing 78-yard touchdown. Skyline scored their only points of the night on the ensuing kickoff on a 90-yard return.

The Pioneers closed out the first half with a pick 6 when linebacker Dallin Green intercepted the ball and sprinted down the Eagle’s sideline for a TD. Conner Stewart was 5/5 on the night for point after touchdown kick attempts. The score at the end of the first half – and at the end of the game – was Lehi 42, Skyline 7. With such a commanding lead, Lehi’s offense chewed up the clock in the second half to end the game.

State tournament time! The defending 5A state champion Lehi Pioneers play the Jordan Beetdiggers in the first round of the playoffs. The game will take place at Jordan High School this Friday (Oct 26) at 4 p.m. The Pioneers (5-5, 3-2 Region) ended the season as the number 3 team from Region 6. The Beetdiggers (5-4, 4-1 Region) are the number 2 team from Region 7. The winner of this game will face the winner of the Skyridge, Farmington contest.