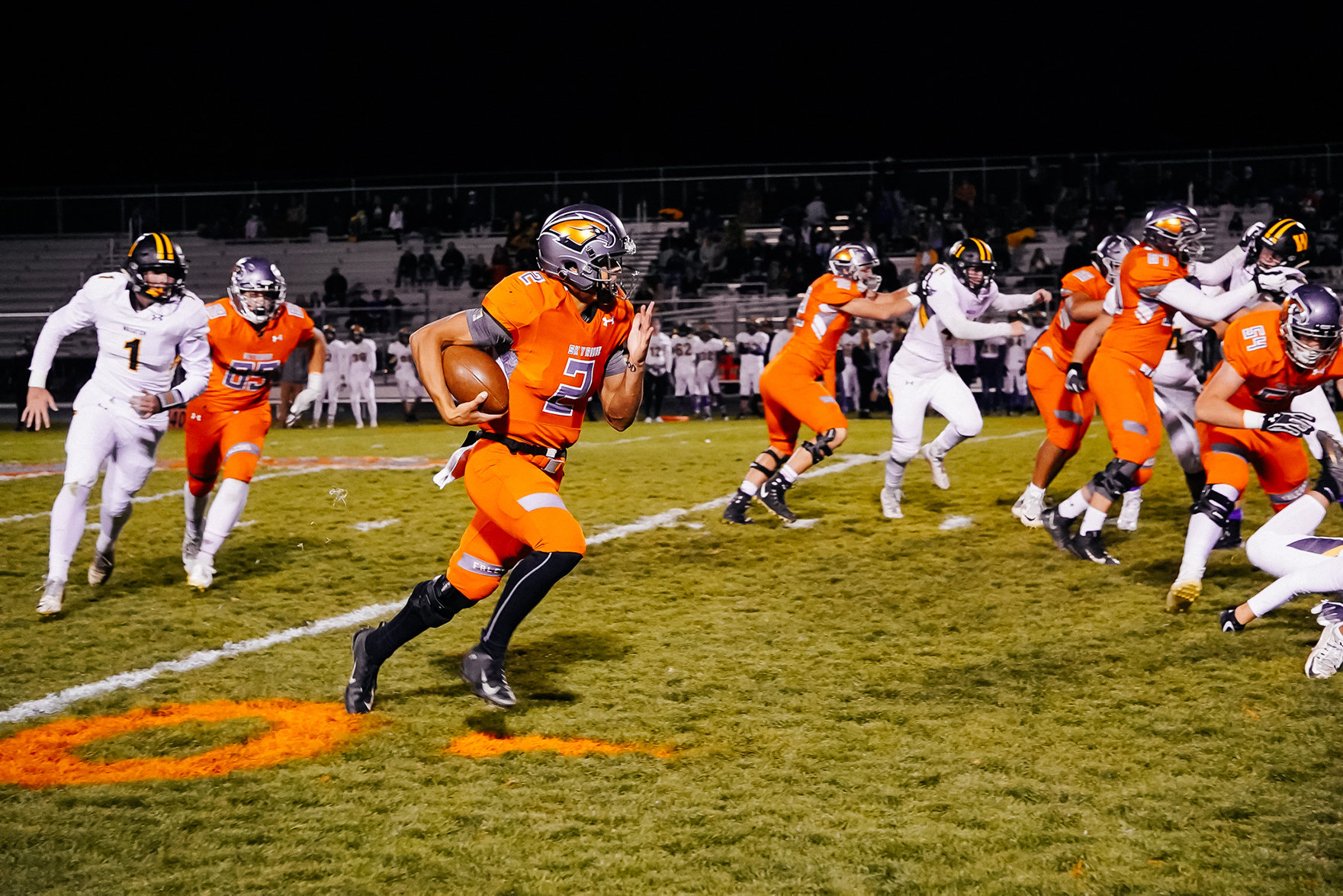 There was a chill in the breeze and the stadium was filled. The orange leaves, as well as the orange Falcon jerseys, tumbled to life with the Friday night lights. Excitement roused the Skyridge Falcon Football team and they were ready to play. It was Senior night and the final game of regular season play. For many reasons, this was a special night for the Falcons.

Recognition of each Skyridge senior took place during a pre-game program. The many talented seniors lined up on the football field with their parents and friends. They were honored for their many contributions and hard work. Afterward, it was game on and the Wasatch Wasps had come to play.

Wasatch’s energy was felt as they ran onto the field and started off strong with a 65-yard kickoff return that quickly led to a touchdown by Kaden Smith on a 17-yard catch and run. The extra point gave the Wasps a 7-0 lead. The Falcons quickly responded with a 50-yard kickoff return by James Palmer. Skyridge’s offense played with vigor and force. Jayden Clemons quickly connected with Dylan Samuels on an 18-yard pass. Ma’a Notoa then ran the ball into the end zone. Connor Harris was successful with the PAT and the Falcons were on the board 7-7.

Falcon Bowen Thomas continued assault as he made a vital tackle on the next kickoff. The Falcon defense was controlled and physical. Blayden Togiai started off fierce with a sack. The defense made hard tackles and dominated the field.

The Wasp defense played hard, but the Falcons stayed in control. Notoa ran the ball 12-yards for a touchdown. The first quarter ended with a 14-7 Falcon lead. Dylan Samuels scored another touchdown on a 24-yard reception. The two-point conversion was successful with a catch by Colby Dulle and the score was 22-7 for the Falcons. The Wasps continued to create obstacles for the Falcons as they played with heart. The half-time finished with a 25-10 Falcon lead.

The Falcons dominated the second half of the game. Payton Ainsworth ran the ball for 55-yards which lead to a touchdown run by Junior quarterback, Emmett Call.

Ainsworth ended the night with 10 carries for 128 yards rushing. Samuels had four catches for touch yards including his touchdown. Blayden ended the game with 3.5 tackles for loss. The excitement of the Falcons could not be contained as they ran over the Wasps with a final score: 42-17.

The Falcons were named Region 8 Champions after the game. Skyridge Head Coach, Jon Lehman said, “This team earned the Region title. They have played physical and are undefeated in Region play. There were lots of good things that happened tonight on the field.” Lehman said to the team, “I’m proud of your effort and focus. I’m proud of all the seniors tonight but we aren’t done yet, now is the time to focus and work hard.”

“This was a great win. Winning Region was on our list of goals and we accomplished that tonight. We are going to enjoy this moment but tomorrow we are going to get back to work,” said Senior quarterback, Clemons. When asked how he felt about the game, Junior quarterback, Call said, “I’m feeling so good. This was a good win tonight and we played hard all season to become Region champs. We followed the example of our coaches and we came together as a team.” Falcon Receiver Samuels summed up the night as he said, “I’m feeling so good. There is nothing better than a Region championship. We worked out plays this week and were successful tonight which resulted in a successful season.”

The excitement of the game and of the players was felt as the Falcon crowd rushed the field for a big celebration. The Region 8 Champs will take on Farmington at home for the first round of the State playoffs at 4 p.m. on Friday, October 26.