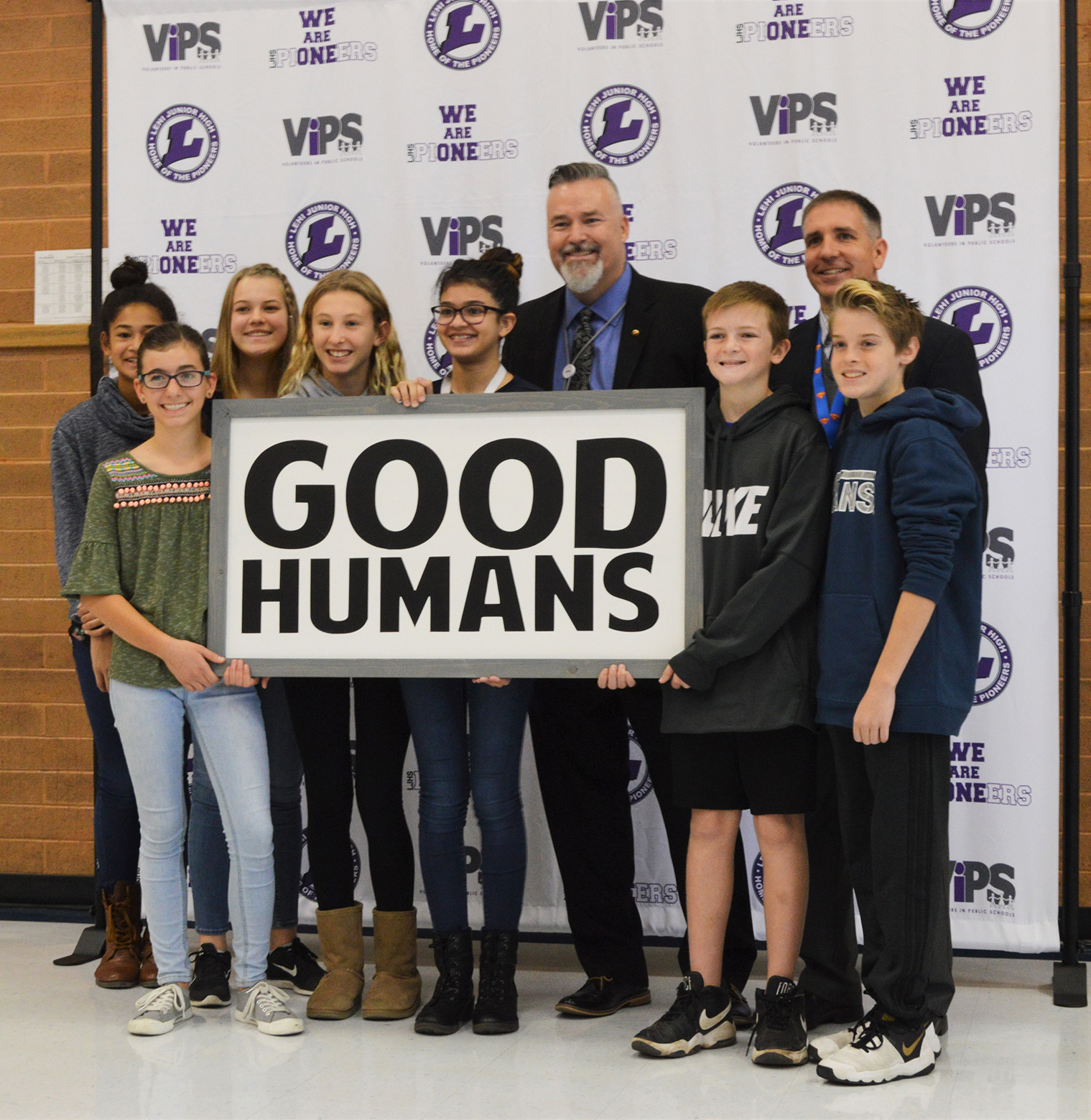 Several students at Lehi Junior High School were surprised Monday morning, October 29, when they were surprised by being pulled out of their classes and recognized for being good. Teachers at LJHS have been taking notice of students going out of their way to be kind since the school year began. Each teacher then nominated one student to receive a “Good Human” Award.

One of the recipients of the Good Human Award was nominated because she sat with another student who would have been alone during lunch – then she made a point to follow up with her fellow student later. Another “good human” was nominated because he takes it upon himself to hold the door open for people and wish them a good day as they come in and out for lunch.

“The only requirement for nomination is that the nominee has done something to help someone else,” explained Stacy Bateman, PTA President for LJHS, who spearheaded the Good Human Awards program. “Goodness matters. The thing I love best about this program is there is not a set list of requirements. We can recognize a variety of things. We believe that this will start a wave of good acts that will just multiply,” said Bateman. She pointed out that there are many kids at LJHS doing amazing things in sports and academics, but there are also kids who aren’t on the honor roll or involved in other programs who are incredible. “We want to strongly send the message that while academics and sports teams are great, who you are inside is what matters most,” said Bateman.

Leaders in the community came to LJHS early Monday to present LJHS Good Humans with a T-shirt and their nomination card. Rob Smith, Assistant Superintendent for Business Services and CFO for Alpine School District, Cory Maloy and Kay Christofferson from the Utah House Representatives, and Lehi City Council Member Chris Condie came to present Good Human Awards, as well as Brandon Hassler and Samantha Sappenfield from Dev Mountain, the sponsor for the event. Dev Mountain is a technical school for computer programming and web design. When Hassler saw Stacy Bateman’s Facebook post about the Good Humans program, he contacted her right away. “We wanted to be part of any program that encourages people to be the better version of themselves,” said Hassler. “We live in a world with a lot of finger-pointing these days, unfortunately, and people are usually waiting for someone else to make a change. The reality is if we want to see change, we need to start with the little things like these students are being recognized for today.” Dev Mountain donated the T-shirts the students received, which featured a quote on the back that said, “The world is full of good people. If you can’t find one, be one.”

Some of the teachers were emotional when Rob Smith from ASD asked about the students they had nominated. “Each one of these students has been found making someone else feel good. This recognition today is what makes Alpine School District great – kids who choose to do good,” said Smith.

“As we work to develop a school of high academic rigor, we also know that what’s really critical for success is the quality of people that, as a community, we help build,” said Principal Kevin Thomas. “It’s a privilege for me to work with these outstanding students every day.”