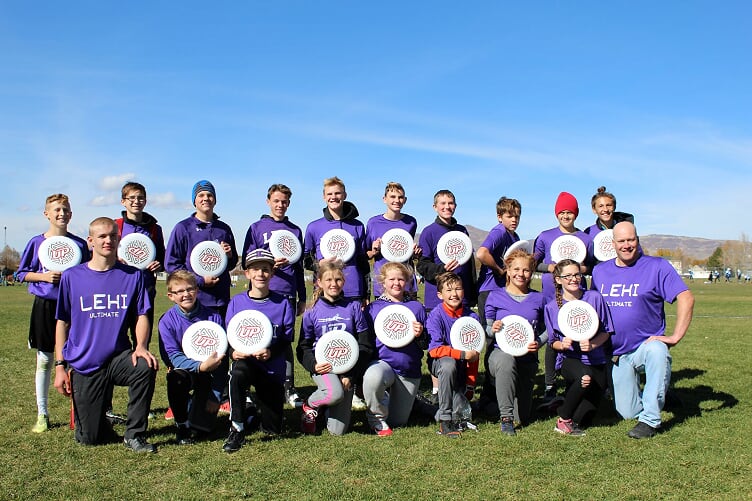 “People think Ultimate is Frisbee Golf, but it’s nothing like golf. It’s really more like soccer, but with discs – and we don’t use regular Frisbees because they’re not weighted the properly,” explained Natalie Ellis, coach of the middle school team from Lehi. Ellis has been playing Ultimate for six years, starting in an Orem league with co-workers. One of the unique things about Ultimate is that it’s co-ed, and in most leagues,  teams need to have a set number of girls playing. For the Utah Ultimate Fall League, teams had to have three girls out of seven players on the field or they had to play with six.

Although some of the girls on the middle school team were new to Ultimate when practices began late in the summer, Ellis watched as the other members of the team encouraged and taught their teammates. “The boys really included the inexperienced girls. They all had a great ‘team’ mentality,” said Ellis. Ellis’s daughter, Narcisa Ellis, wanted to play at her own school in Lehi, so Natalie Ellis started advertising and recruiting players in the middle schools and junior highs closer to Lehi. Narcisa has been playing Ultimate for two years, participating in all three seasons of play for those years.

There are no referees in Ultimate Disc games. The players themselves can say the word “contest’ if they feel like they were fouled. “I love that it teaches the kids to stand up for themselves, but also not to overreact if someone calls them on a foul. Sportsmanship is very important in Ultimate,” said Natalie Ellis. In the official rules for Ultimate, they call it “Spirit of the Game” and they describe it on their website, “Highly competitive play is encouraged, but never at the expense of mutual respect among competitors, adherence to the agreed upon rules, or the basic joy of play.” At the end of every game, the competing teams get into one huddle and compliment specific plays and players from the opposing team before combining their team names in a cheer as part of the Spirit of the Game tradition.

Natalie Ellis will be organizing a Spring team for the middle schoolers. Anyone and everyone who signs up will be able to at least practice with the team. If Ellis gets 20 or more kids to sign up, she’ll create two teams. Email Natalie Ellis at ellinata@hotmail.com for inquiries about middle school or junior high students who may be interested in playing Ultimate Disc. Any adults (age 16 or older) are welcome to play in the Orem Ultimate Spring and Fall team. Visit oremultimate.com for more details.