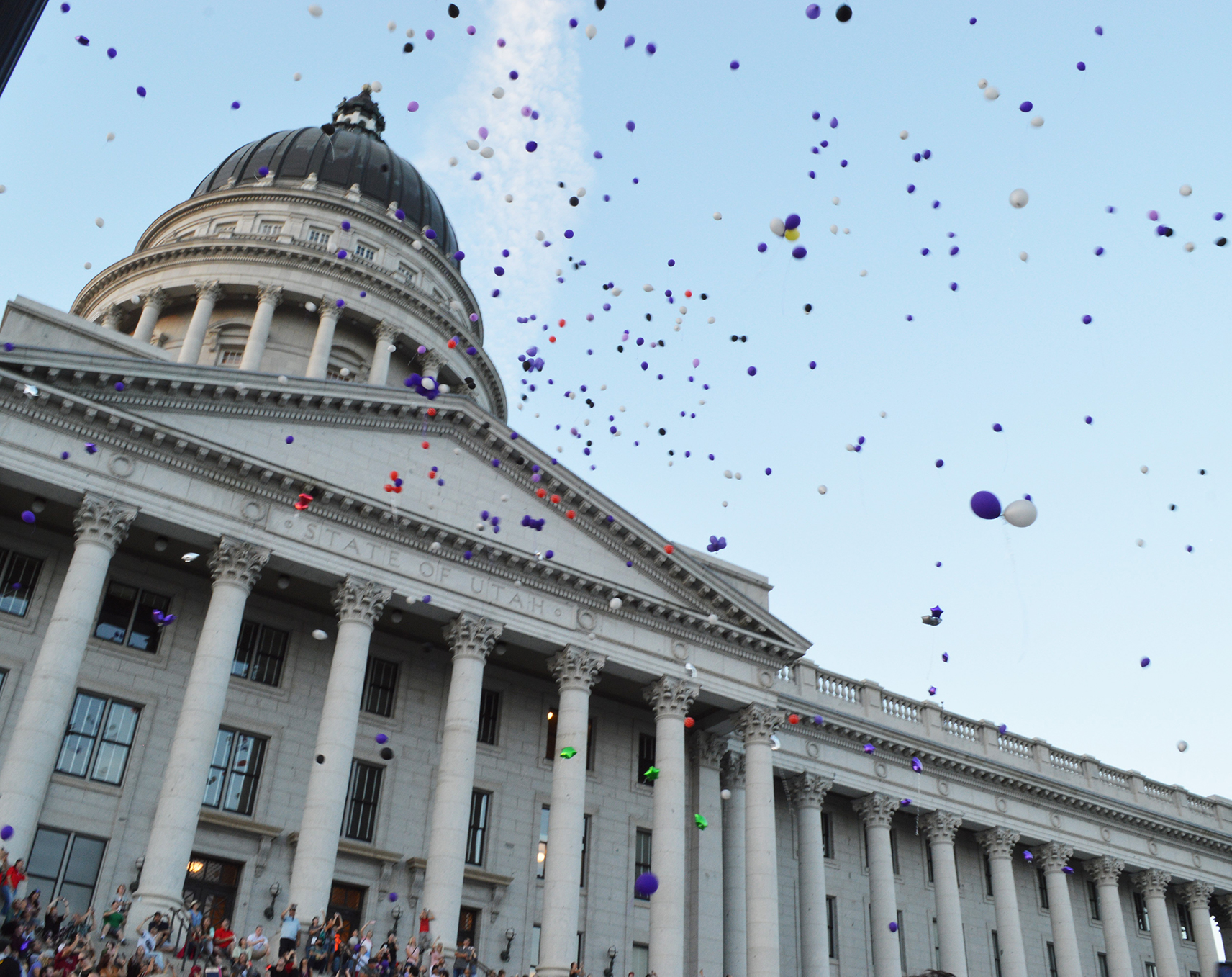 The Utah State Capitol steps were filled with families and friends honoring lost loved ones last Friday, August 31. Lehi resident Amber Lindquist Baum organized the Overdose Awareness Utah event that brought people together and provided a little education and hope to those who are still struggling with addiction.

“I’ve been planning this event since the week after the last one ended,” said Amber Baum. “It has been a labor of love for me and has really dominated all my free time.”

The Friday evening program began with two minutes of silence. “We’ve lost too many people to the disease of addiction,” said Damian Trujillo, a former addict who has lobbied for changing laws to save addicts who are overdosing when the police arrive on the scene. “We can make a change, we can recover,” added Brandon Allen of Addicted We Stand.

An emotional Amber Baum welcomed to the Capitol steps runners with Addict II Athlete who had started their race at 10600 S. State Street and arrived at the capitol just after the two minutes of silence. Baum then explained to the crowd, “I founded Overdose Awareness Utah after my daughter died from a heroin overdose. She’s like so many of your sons and daughters and loved ones. She was spunky, fun, amazing, and a loving kid who kept me on my toes and she struggled with addiction. She was more than her addiction and that’s why I’m here today – to change the stigma, to change the way people are thinking. To change the way we treat addiction as a whole.”

Utah Speaker of the House of Representatives Greg Hughes said, “Nothing is more impactful to a policy maker or a public servant than you and everybody that’s here. Hearing your stories makes it more real than a PowerPoint presentation could.” Hughes went on to say that there are no parties or politics when it comes to the issue of the opiate addiction crisis in Utah. “My eyes were opened when I went to the Rio Grande and things were just getting worse, the problem was accelerating. What I learned was that four out of five people seeking heroin started with a pain prescription and pain management. I learned, to my horror, that if you just follow the prescription on the bottle you stood a strong chance of becoming physically addicted. That made it real for me. We have a public health crisis that affects everyone.”

Hughes also spoke about sharing stories and empathy over social media to help take away the stigma of addiction. “We’re making Naloxone more available. We want people to have this. And Good Samaritans – we don’t want people to be afraid to call 9-1-1 when they’re trying to help,” said Hughes. “The good news is we’re here together and our numbers are growing.”

Black, purple, and silver balloons were handed out and the One Voice Children’s Choir sang three numbers. As the soloists finished their last notes, they released their balloons and the crowd followed suit. The sky was soon filled with balloons just as the sun was setting, a sight that hushed the crowd.

“I hear about friends dying every week. It’s heavy – and I’m sure there will be more,” said one woman, a former meth addict and member of Addicted We Stand. “Events like this make me feel hopeful.”