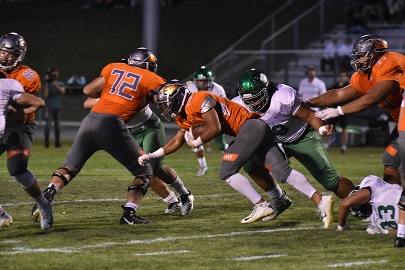 The temperature was below 70 degrees and there was a slight breeze last Friday, September 21. The Skyridge stadium was filled with orange and the enthusiasm in the stands was contagious. The Skyridge High community were joined together to enjoy this year’s homecoming football game.

The magic of the highly ranked Falcon football team did not disappoint. Skyridge worked hard to overcome adversity in the first half. At the beginning of the first quarter, Falcon energy was low as the Provo Bulldogs gained possession of the ball on a muffed punt return which led to a score by Ben Myles-Mills. The Bulldogs had a seven-point lead, but Falcon spirit was evident as the team worked to rise above the challenge.

The Falcon defense seemed to struggle with the Bulldog’s passing game as they gained yards quickly, but Skyridge QB Jayden Clemons came ready to play. Clemons quickly connected with Nathan Upham on a 10-yard pass leading to a 1-yard touchdown plunge by Ma’a Notoa. The Falcons were now on the board with a 7-7 score. Skyridge continued to work through adversity as a fair catch interference call against the Falcons resulted in a 15-yard penalty, giving the Bulldogs excellent field position. The Bulldogs ran a well-executed reverse for a 10-yard touchdown by Myles-Mills. The Falcon offense responded as Upham completed a 35-yard pass by Clemons and it was game on. Falcon, Notoa ran for another touchdown and the PAT was completed by Connor Harris.

Notoa could not be stopped as he ran forcefully for 29 yards, breaking three tackles for another Falcon score. The Falcons offense gained control of the game and the Bulldogs couldn’t contain their vigor. On Falcon defense, Jaxon Peck’s sure tackling helped keep the Bulldogs out of the end zone giving the Falcons a 31-21 lead at the half.

Skyridge’s momentum dominated the second half and made the Bulldog’s offense seemingly disappear until Taylor Heiner intercepted an errant throw by Clemons and the Bulldogs scored a touchdown on a 10-yard run by Myles-Mills. The Falcon offense was resilient as Notoa gained yards and put them in good field position. Clemons increased the Falcon score with another 6-yard touchdown pass to Upham. The Falcon defense created offensive opportunities as Peck intercepted a Bulldog pass which led to a Falcon touchdown when Clemons threw an 85-yard bomb to Upham. The energized Falcons controlled the rest of the game for a convincing 52-28 victory.

Notoa’s running proved clutch for the Falcon dominance as he ended the game with four touchdowns. “The offense picked up the game and executed well. They moved the ball and played great,” said Skyridge Football head coach, Jon Lehman.

The Falcons enjoyed a well-deserved homecoming celebration as they continue their win streak. Skyridge plays an away game at Timpanogos High School this Friday night, September 28.