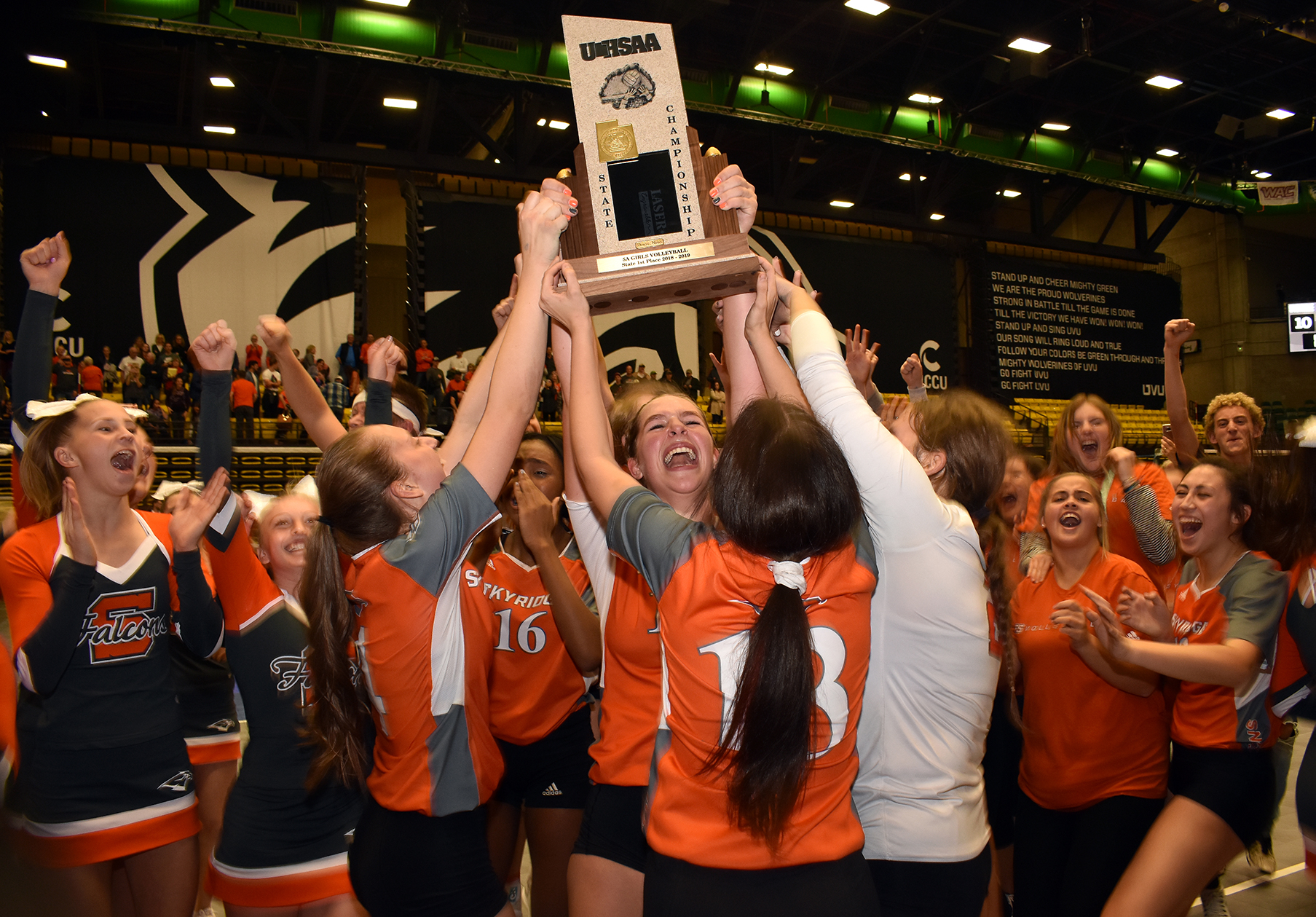 A sea of orange flooded from the bleachers at the Utah Community Credit Union Fieldhouse Saturday night as Skyridge’s volleyball team fought back from losing the first set in the state championship match against Springville. Skyridge had defeated the Red Devils twice in season play.

The 5-A tournament started Thursday evening at the UCCU Center on the UVU campus. Skyridge waltzed through the first two games. Skyridge played Farmington and defeated them in three sets. Skyridge dominated in every aspect of the game, hitting, serving, digs, and passes.

The second match of the evening pitted Skyridge against Murray. Skyridge went up 19-6 after the first 15 minutes of play. Set scores were 25-12, 25-7, and 25-12. Skyridge looked unbeatable. The win put the Falcons on a course to play for the title.

Skyridge players #19 and #20 jump for a block in final match against Springville. | Matt Paepke

Skyridge seemed out of sync and made some service errors. Often hits were out-of-bounds. Box Elder prevailed 25-23 in the first set.

In the second set, Skyridge found their rhythm and confidence. Chelsee Greenwood was deadly with precisely placed hits. Kenadee Christensen’s outside hits helped propel the Falcons to a 25-21 win.

The third and fourth sets were close, but with key hits by Greenwood and Annie Taylor at crucial times, the Falcons won the match. All of the Skyridge players were playing excellent volleyball. Notably, Chelsee Greenwood, Alice Ellsworth, Tylee Fuller, Annie Taylor, Kenadee Christensen, Shaylee Cuff, and Kaitlyn Standifird.

The championship match was a spectacle as the lights were dimmed and the two teams marched into the gymnasium. The National Anthem was sung by Skyridge student, Brooklyn Booth, The two teams took the floor to the deafening roar of the student sections. Skyridge students were on their feet during the entire match.

During the first set, Springville’s athletic team took advantage of some service errors and errant hits. The Falcons seemed to be suffering from some jitters as the Red Devils jumped out to a 14-7 lead. Skyridge came back within 3, but Skyridge could not prevail as Springville won 25-19.

In the second set, Springville lead during the first few minutes. It looked like this might be a re-run of the first set, but in the final minutes, with dead-on Lexie Greenwood serving, Skyridge scored 5 straight points to tie the game at 24. The Falcons gained composure and did what they have done all season, they found a way to win 26-24.

The final two sets saw the Skyridge girls gain back their confidence. Coach Deanna Meyer, whose demeanor is always controlled and positive, guided her team to wins, 25-20 and 25-10. Kenadee Christensen found her groove and made several key kills to invigorate the team. Sophomore Annie Taylor was also deadly as an outside hitter.  Lexie Greenwood was steady in serving and other aspects of the game. Ken Greenwood, grandfather to three Skyridge players, commented at the end of the match, “That’s what a total effort looks like. Good stuff.”

A celebratory procession led by Lehi Police Department started at the Lehi freeway exit all the way to Skyridge High School where students, parents, coaches, players, and high school staff members shouted, cried, and embraced. It was an evening that will never be forgotten.