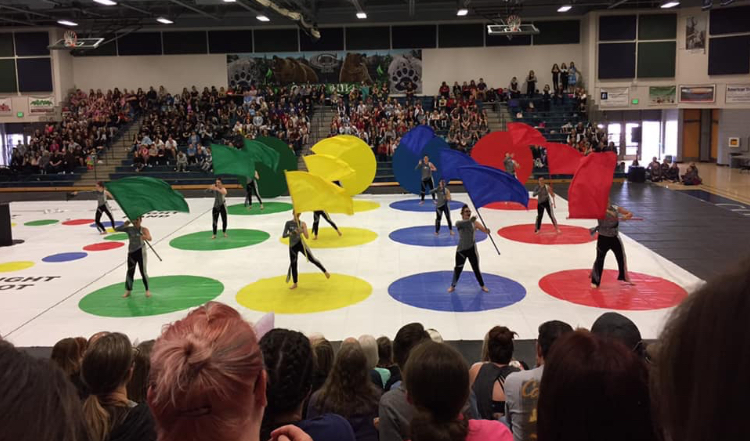 Both Skyridge and Lehi High School Color Guard teams took home State Championships this past weekend in their respective ranking.

Skyridge won their third consecutive State Championship with a piece dedicated to Hellen Keller. Coach JennyLynn Meek said doing a performance based upon the life of Hellen Keller is something she had wanted to do for a long time, but the timing never worked out. This year, one of her seniors is legally deaf, and Meek said it was “now or never.” “I knew it would mean a lot to her in particular and her story just inspired me,” Meek added.

With instrumental music from “Sound of Silence” and “True Colors”, the show started with the team in all black, symbolizing the time before Hellen Keller learned to communicate. “It was a very somber mood,” Meek said. The second half represents Keller’s life after she could communicate. “Color had been introduced into her world, and we wanted to represent that,” Meek explained. The team’s costumes changed from black to color, and their flags were colorful. “I cried every time I watched them practice it,” Meek said. “It’s really an emotional piece.”

She said everything in their show was very symbolic and communicated Keller’s story. “It’s about overcoming obstacles,” Meek said. Famous quotes from Keller were voiced over the music and sign language was used throughout the show.

The show didn’t just win the Skyridge team a State Title, but the number also won the Fan Favorite award. “It reached the audience the way we wanted it to. Our goal was to tell the story of Hellen Keller and inspire those that saw it,” she said.

On the team’s Instagram page, the girls were recognized. “What a season. It was not easy, but we did it. We crossed the finish line. You have inspired and touched so many people just by telling the story of Hellen Keller through dance. Congratulations on an undefeated season,” it read.

Lehi High School also took home the state win after their show called “Twister”. Celeste Reynolds, LHS coach, said, “We wanted to do something fun that both the audience and the kids would relate with.”

The team had a giant Twister mat on the floor, and it was choreographed to show the team “playing” the game. They even had the instructions over the music like, “right hand- red”. Reynolds said she wanted to create a show that would get the student body’s attention and help with recruitment for future years. “We wanted to do something that anybody would have fun watching, even if they didn’t understand the sport itself,” Reynolds said.

Reynolds said after the time and work the team dedicated, they were happy and “pleasantly surprised” with the win. “To see how far we’ve come since the first of the season, I’m really proud of them,” she added. Color Guard is ranked differently than other high school sports. The ranking system is based on talent level, not school size. Skyridge is ranked Scholastic A and Lehi is ranked Intermediate A. Meek said it’s the equivalent of a 5A and 4A ranking, respectively.