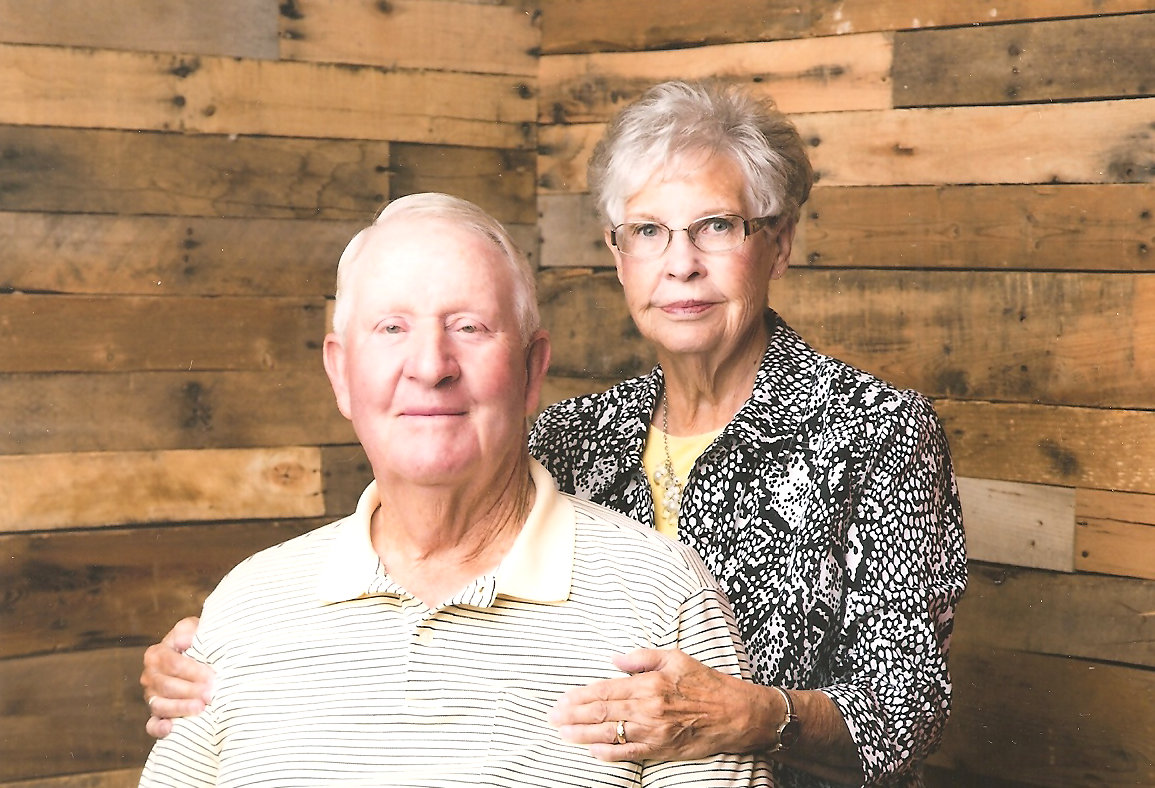 Both Douglas and Colleen Calton have deep roots in Lehi. Colleen’s great-grandmother, Harriett Jackson Brook joined The Church of Jesus Christ of Latter-day Saints in England in 1841 and came with her parents to the Salt Lake Valley. Harriett’s father was a carpenter and Bishop Evans of Lehi asked Brigham Young to send carpenters to Lehi. On the street where the Caltons now live, Trinnaman Lane, stand the houses where Colleen’s grandfather and mother were born. Colleen was also born on Trinnaman Lane, but that house no longer exists. Colleen has spent a lifetime living on the same street, but her influence for good stretches far beyond Trinnaman Lane.

Douglas Calton has been an active and enthusiastic civic worker in Lehi for decades. He served on the Civic Improvement Association for 32 years on committees that built bleachers, chutes, holding pens and facilities around the rodeo grounds. Douglas was assigned to climb light poles with LaVere Downs, hanging pennants every year for the Round-Up celebration. From 1971 to 1975 Douglas was on the City Council where he worked on the Beautification Committee, Planning and Zoning Commission, and the Power Board. Mayor Garry Sampson presented Douglas with a Community Service Award for his work. For many years, Douglas coached little league baseball in Lehi.

Everyone who lives within several blocks of the Caltons has seen Douglas on his orange Kubota tractor going to or from a home where he has leveled dirt for a new lawn or tilled a section for a garden. When he’s not in his work overalls, Douglas is in a suit and tie doing church service. He and Colleen worked as LDS Church Service Missionaries at the Missionary Training Center in Provo for six years.

While she was raising their six children, Colleen also made time for the community. She was president of the Leity Club, a literary club for women. During her time as president, one of the projects the club took on was raising money for the Lehi High School band uniforms. Colleen served as an election judge for 38 years. For some of that time the voting booths were inside her home and she and the other judges counted the ballots by hand. During the 1980 election they counted 279 votes for President of the United States. That was a good turnout for Lehi at the time!

Besides serving with Douglas at the MTC for six years, Colleen also served a Church Service Mission as a Member Locator for four years. Colleen has also provided piano accompaniment for hundreds of musical numbers in every combination of voices imaginable.

The Caltons are proud parents of JuliAnn, Steven Douglas, Wendy, Amy, Gordon H. and Robert Hyrum. They have twelve grandchildren and eight great-grandchildren. Lehi City is lucky to have Douglas and Colleen Calton quietly influencing our community for the over 60 years they have been married.

Douglas Calton on his tractor.

A blind date close to 50 years ago and more than 2000 miles from Lehi brought Russell and Rita Felt together. Russell, who grew up in Lehi and graduated from Lehi High School, was commissioned to Suffolk County Air Force Base on Long Island in New York City in the late 1960’s, when friends set him up with Rita, who is the first generation in her Italian family born in America – she was living in Long Island at the time. They got married in England (where Russell was serving in the Air Force) in 1968 with only Rita’s parents and her sister attending the wedding. Rita’s parents went on to Italy after the wedding to visit family, which ended up starting Rita on a search for her ancestors. She has found over 6000 of her ancestors in Italy so far.

The Felts made their way back to Lehi in 1975 after living in New York and Manti, Utah. Russell continued teaching English at the high school and also coached several sports. He became a school counselor, then assistant principal, then principal at Lehi Junior High, and finally principal of Lehi High School. When Russell retired in 2001 he was Director of Pupil Services for the school district.

Russell has always had a hand in helping with community projects in Lehi. As a young man he helped build Vet’s Ballpark, pouring and raking the red sand on the baseball diamonds. He now serves on the Collections Committee for the Hutchings Museum, where he is currently working on a project that involves paintings that were purchased by senior classes of Lehi High School. Russell is passionate about preserving Lehi’s history and sharing it with all the new residents of this once small town.

When Russell and Rita met, Rita was an elementary school teacher and she continued in that profession as they moved around the country. She loved raising their three boys here in Lehi. They did a lot of traveling as a family, especially to New York to visit Rita’s family, but she was grateful to have small-town Lehi as a base. The family had access to cosmopolitan experiences while having the best environment for their children to grow up in.

Rita Felt retired as the director for a tutorial program at Mountainland Applied Technology College (MATC), where she taught at-risk and disadvantaged high school students, in 2005. Also in 2005, Rita retired after twelve years singing with the Mormon Tabernacle Choir. She traveled all over the world with the choir and even re-connected with cousins during a concert in Rome, Italy. In 2013, she was diagnosed with colon cancer. During her many hours of treatments, Rita knitted socks for her doctors and nurses and other patients. Happily, Rita is cancer-free now, but she continues to knit socks for patients at the Huntsman Cancer Institute.

During their almost 50 years together, Russell and Rita Felt have served tirelessly in the community and also in The Church of Jesus Christ of Latter-day Saints. Lehi City has benefitted greatly from their knowledge and hard work.

The new Mr. and Mrs. Russell Felt on their wedding day.