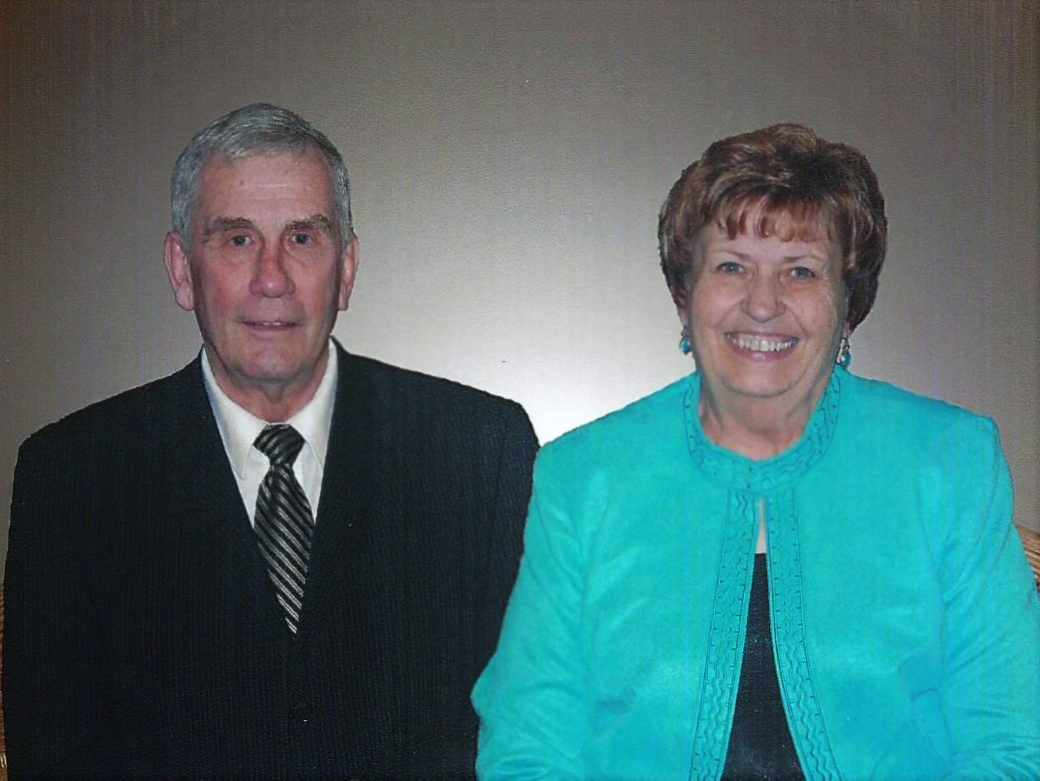 “I’m going home and marry that girl,” exclaimed Bill Powell when he first saw a picture of Kaye Peterson as one of the Queens of the Military Ball in the Lehi Free Press. Bill was serving a mission in the Eastern States when he made that comment to his companion and some months later, marry her he did. That marriage took place 57 years ago.

Bill and Kaye Powell have been Lehi residents their entire lives with the exception of two years in Olympia, Washington while Bill was in the service. Bill was drafted shortly after returning from his mission and served in the National Guard for six years. His basic training was at Fort Carson in Colorado and Fort Lewis in Washington. Bill was on the last troop train that traveled between the two military bases. Bill remembers traveling through Lehi on his way to Fort Lewis and could see his home from the caboose of the train, a very heart wrenching experience for the newlywed.

Upon returning home from military service, Bill went to work at his father’s service station. He was the 3rd generation of his family to own and operate the business. Bill’s son Greg continues the family tradition at the same location on Main Street. It is anticipated that Greg’s son will follow in the family tradition.

For many years Bill took care of every widow’s car in Lehi. His station was one of the few remaining full service stations in the state. Bill would even make house calls when it was necessary. His kindness and service is legendary in Lehi. Bill has served as bishop of his ward, as well as counselor in two bishoprics. He and his boys, Greg and Brent, have been known to clean all the snow from sidewalks around their neighborhood on cold, wintry days. This was a tradition started by Bill’s great grandfather, James, who built a tripod he pulled with a horse and cleaned all the roads in Lehi after a snowstorm.

Kaye has been a help mate and great support to Bill and their family. She has served in leadership positions in every church organization, has served on Lehi’s board of adjustments, and Booster Club president for Lehi High School. She is also a 17 year breast cancer survivor. Her greatest joy is serving her family, Lori, Wendy, Greg, Brent, and Melynda and their families.  Her eyes light up whenever she talks about her 17 grandchildren and their accomplishments.

Bill and Kaye are Lehi stalwarts and are deserving of being honored in Lehi’s Walk of Fame.

“Have I done any good in the world today” are lyrics of a favorite hymn, but the words could also be used to describe Paul and the late Doris Peterson. This native Lehi couple have spent their lives making Lehi a better place to live.

Paul was born across the street from where he lives today. His parents were Virgil and Leota Peterson. Paul grew up in a farming family and at a young age he would harness and saddle Ben Lott’s horses to help his aging neighbor. At 17 years old, Ben offered Paul a deal. If Paul wanted to rent his farm, Ben would go 50-50 on the profits. This enabled Paul to purchase his own farm. Thus began a lifetime of farming and agriculture for Paul and his new wife, Doris.

At 26 years of age, Paul was made chairman of the Metropolitan Water District, a position his father held for many years. Paul knew that Lehi City was in need of water for development, so he negotiated with an attorney hired to distribute the valuable Deer Creek water. With $50,000, five hundred shares of Deer Creek water and some shares of Utah Lake water in hand, Paul traded these assets for underground water rights to drill wells in Lehi. “We traded dirty water for clean water,” said Peterson. “That would not happen today.” Lehi is still benefitting from the deal that was made years ago. Over time, wells have been drilled to provide high quality water for Lehi citizens because of Paul’s visionary action and leadership.

When Lehi Stake did not buy a part of Mutual Dell, a long standing youth camp in American Fork Canyon, Paul started searching for recreational property to be used as a camp site for Lehi Stake young people. He found some land in Heber. He procured the property by writing a personal check to hold the land until the stake could purchase the land. The young women of Lehi have greatly benefitted from this acquisition and each summer hundreds enjoy girl’s camp each summer at the property in Heber.

Doris and Paul were a wonderfully matched team. Both worked in all organizations of the Church of Jesus Christ of Latter-day Saints. Doris was an expert seamstress and taught adult sewing classes. She was a member of the singing group “HiLos.” She spent many fall days canning produce from their abundant garden. She was a help mate in every way. Paul expressed to a church group lately, “Doris spoiled me rotten. I could have been a whole lot better husband.”

Paul and Doris’ lives have been governed by the principles of service and good works. They both have been stalwart Lehi citizens and are richly deserving of being honored in the Walk of Fame.