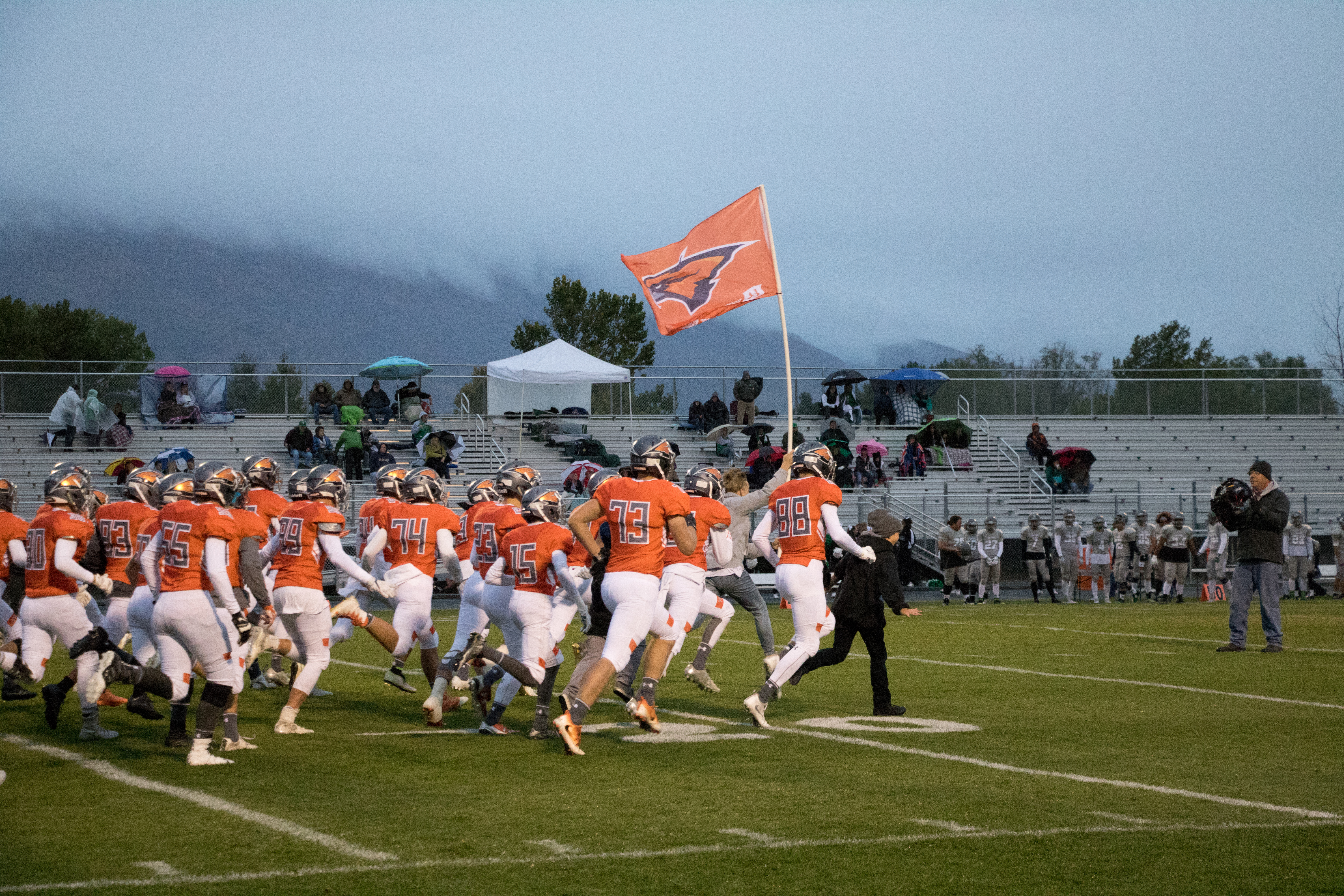 We have learned a few important things about the Skyridge football team this year: don’t schedule them for your homecoming game; they are clutch, especially on fourth down in the closing minutes of the fourth quarter, and the coaches make great half time and in game adjustments.

Skyridge’s first homecoming game was a wet and cold affair that still saw a huge crowd bundled warm and armed with umbrellas to watch the 4-1 Falcons take on the 3-2 Provo Bulldogs. Provo came into the game with a vaunted aerial attack led by their 6’ 4”, 205-pound star receiver Ty Jones, who has committed to Washington and a QB who has thrown for over 1,200 yards. However, the weather and the Skyridge defense were up to the task. Provo drove effectively on its first possession only to fall victim to the weather as they fumbled an exchange recovered by Senior defensive end Davian Hunkin inside the 20-yard line. The Skyridge offense stalled and on the ensuing punt, Provo inexplicably tried to fall on the punt as it rolled and Skyridge recovered the muff. Eight plays later Brendan Roper found the end zone on a 15-yard scamper and Skyridge was up 7-0.

The remainder of the first quarter and most of the second was mired in penalties and mistakes by both offenses as they endured steady rain while the defenses each played well. Late in the second quarter Provo finally got on the board with a field goal to make it 7-3. Skyridge stalled on offense and Provo got the ball back at its 21 yard line with only seconds left in the half. Jorgensen stepped back and threw a beautiful ball to Jones who had gotten behind the defensive backfield for a 79 yard touchdown pass as time expired and a 10-7 Provo lead.

This was exactly what Gig Griffith and the student council did not want as they began halftime homecoming activities on a sour note. Thankfully the halftime show was first rate as the cheerleaders and drill team put on a great routine and the homecoming royalty were honored. Flash the Falcon ran back and forth with his umbrella trying to keep the royalty covered from rain. The halftime show ended with a fantastic fireworks show, pleasing the crowd.

The mood really picked up early in the third quarter as Brendan Roper did his best Flash impersonation and out raced everyone to end zone for a 65 yard TD run to put the Falcons back up 14-10. Unfortunately this excitement lasted all of one play as Provo scored on a 65 yard TD pass on its first play from scrimmage to take a 17-14 lead. Things didn’t get much better for Skyridge on the next possession. After picking up a couple first downs the elements took over and two bad snaps resulted in Skyridge losing 39 yards and the football to Provo at the 4-yard line. Two plays later Jorgensen scored on a QB keeper to put Provo up 24-14 going into the fourth quarter.

Skyridge was driving once again when the ball slipped away again on a quarterback to running back exchange and Provo recovered. However, as has been the case the last few weeks the defense stiffened up as Coach Lehman dialed up the pressure and after giving up another long pass to Jones of 45 yards Garrison Norton sniffed out a reverse pass and sacked the Provo wide receiver for a 19 yard loss to stall the drive. Skyridge was then forced to punt and Provo went on a long drive that stalled at the 4-yard line as the defense held tight. What happened was truly a feat to behold—350-pound defensive tackle Matt Raass jumped through the line of scrimmage unblocked, smothering the ball and field goal attempt. As Matt ran down the field celebrating, Skyridge picked up the ball and advanced it to the 17-yard line. With less than five minutes to play “Clutch” Cody Frampton began his primetime show by completing a 10 yard pass to Nathan Upham. A few plays later “Clutch” found Colby Samuels in the end zone for a 25-yard strike to take the score to 24-20 after a missed extra point with 3:37 left in the game. The drive went 83 yards in 11 plays.

After the ensuing kickoff, and after Jorgenson ran out bounds to stop the clock, Senior Defensive End Kalil Hunkin made a huge stop on 3rd and 2 as he met Jorgenson in the backfield for a four-yard loss and Provo was forced to punt. Skyridge took over on the 40 yard line and after a 5 yard run, an incompletion and 2 yard line, Mr. Clutch did it again finding Billy Dulle for an 8 yard completion on 4th and 3 to sustain the drive with just over a minute to play. Two plays later Frampton found Nathan Upham behind the defense and threw a perfect spiral that Upham bobbled briefly and then hauled in for a 38 yard TD pass with one minute left on the clock. The extra point by Charlie Legaspy was good and the Falcons led 27-24.

The defense for the second week in a row ended the game as Jorgenson threw into tight coverage and the ball was tipped and intercepted by Eli Pulu to secure the win for Skyridge and to maintain tied for first in the region at 3-0. For the third week in a row Skyridge won a homecoming game- only this time it was their own! The Falcons ran for 248 yards and passed for 184 as Brendan Roper had another huge day rushing for 182 yards. Provo passed for 180 with Jones accounting for 133 of those yards and they rushed for 163. Kalil Hunkin had a huge game with 8 tackles,3 tackles for loss and 1 1/2 sacks.

Skyridge plays Thursday night at home at 7:00 p.m. in what will be the biggest game of the year so far as they take on #4 ranked Alta. First place in Region 7 is on the line. Wear your orange and be ready to cheer!