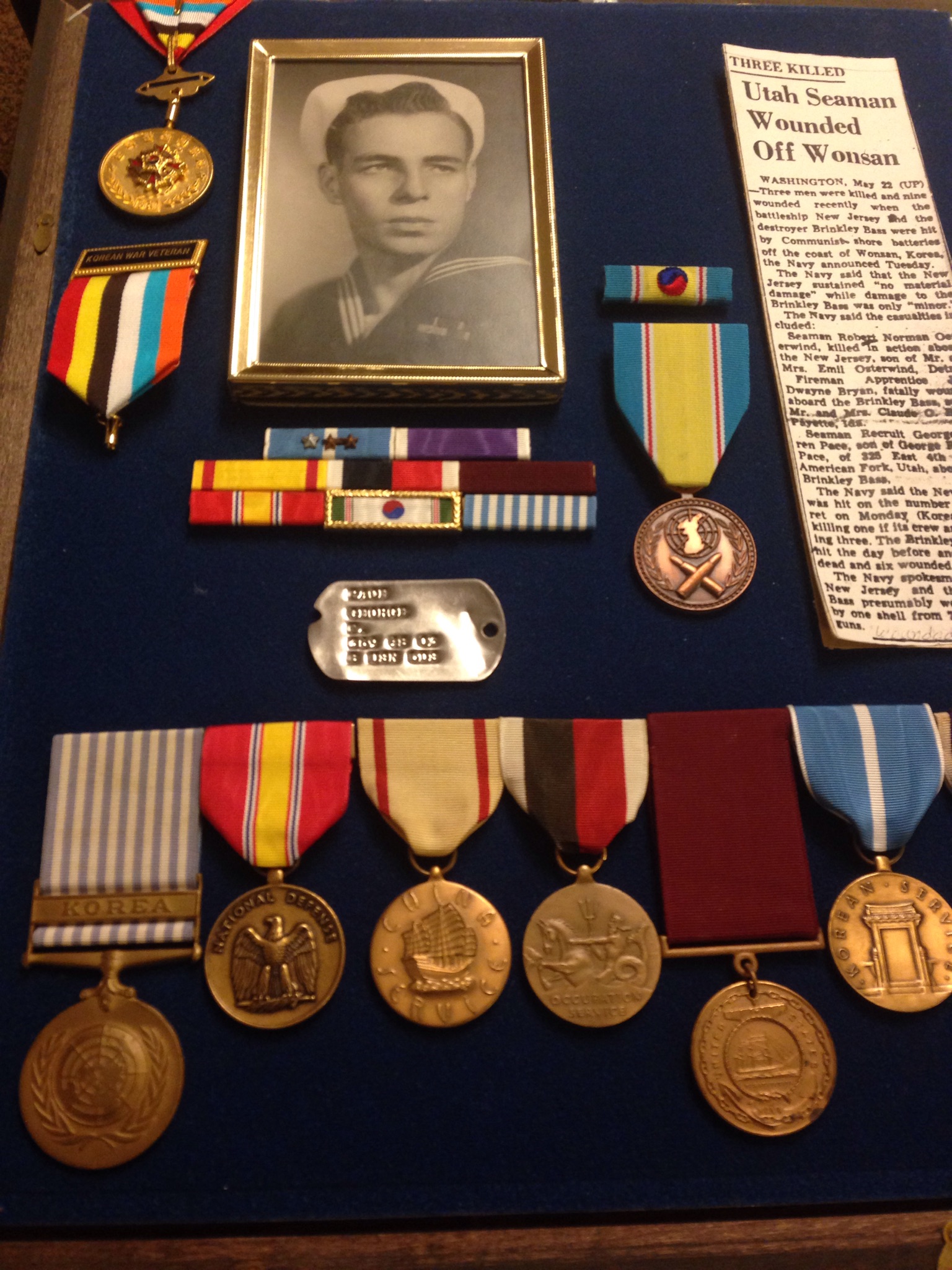 When you drive past George Farren Pace’s house in Lehi there is a lighted American flag flying on a flagpole in the front yard. Hanging on the walls in his house are pieces of military memorabilia, and there is emotion in his voice as he talks about his experiences in the navy during the Korean conflict.

In 1950 Pace enlisted in the navy at 18 years old. When he went to Salt Lake City to enlist there was a long line of young men waiting to join. Several local friends signed up alongside him; Jack Doyle from Lehi and Jay Singleton, from American Fork. They ended up together at Treasure Island, in the San Francisco Bay. There were over 5,000 boot camp graduates preparing to fight in Korea at Treasure Island. All 5,000 went home on leave but Pace and the three local enlistees were not scheduled to do so. The local men became reacquainted during this time. After a two week leave, the Utah county sailors returned to Treasure Island then flew from there to Japan on their first overseas assignment.

The four men rode a train the length of Japan to arrive at their destination. They passed over the ruins of Hiroshima, where the first atomic bomb was dropped. During this duration, Pace and John Dewayne Bryan, an enlistee from Payette, Idaho, became best friends. They were sent to the destroyer the U.S.S. Brinkley Bass DD887. Meanwhile, Doyle and Singleton were assigned to other ships. The Brinkley Bass was stationed in the Wonsan Harbor of North Korea. The ship was commissioned to keep roads and railroads inoperable so the North Korean military could not resupply troops fighting the South Koreans. They also protected mine sweeper ships working in the harbor.

In May 1951, the ship was bombarded. Pace was injured by flying shrapnel that lodged in his arm. The metal was dug out of his arm, bandaged, and he resumed his duties despite the injury. He simply says, “It was no big deal.” His buddy, Bryan, standing next to him, was fatally wounded during the attack. This was the hardest thing Pace had to deal with during his time in the navy.  It was reported in the paper Pace was a fatality and for a time his family thought he was dead. The newspaper report was inaccurate.

Pace served on the Brinkley Bass for 3 1/2 years. During the conflict, the ship was awarded 7 Bronze Stars for engaging in 7 major battles, as well as the Republic of Korea Presidential Unit Citation. Pace was awarded a Purple Heart for being wounded during battle. He was discharged in 1954 after serving 4 years in the navy.

Pace has created an extensive history of his life in the navy. He has researched pictures and stories that covered the four years of his military experience. His scrapbook is a treasure trove of personal pictures, stories, newspaper clippings, and military documents. His service and desire to capture the details of his time in the navy serve as a legacy for his family and friends

Pace is a long-time Lehi resident. Over 50 years ago, he married Darlene Greenwood and their combined families numbered nine children. He has been a devoted father and husband, and continues to support his family and work on family history in his spare time.