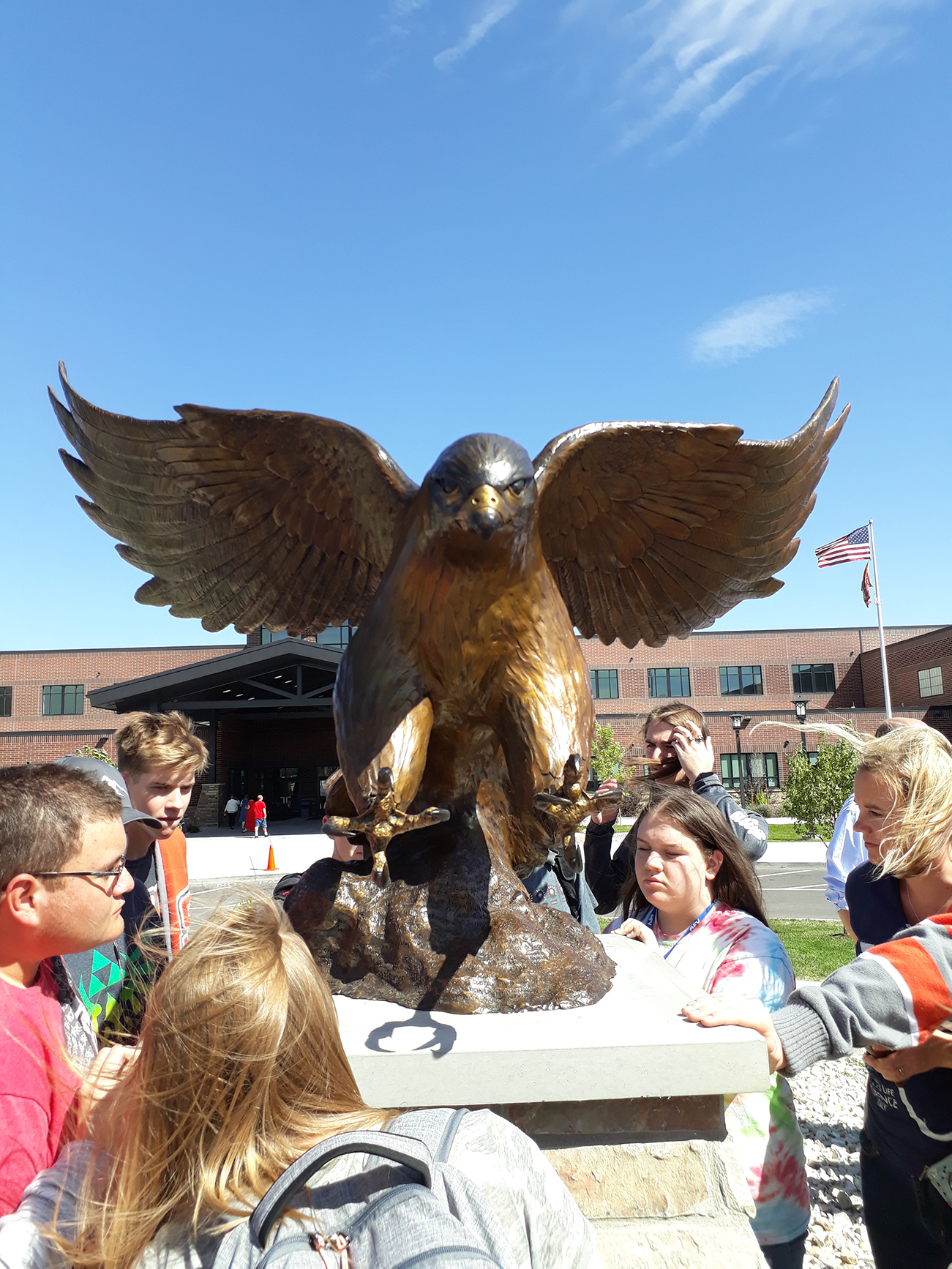 Last Wednesday, September 12, Skyridge High School finally unveiled their falcon statue. Students gathered around the front entrance of the school to witness this long-anticipated event. Before the covers were dropped, however, Principal Perkins and a few faculty members offered thanks and recognition to the student who made this all possible. Rhiannon Tara Gray, the sole creator of the statue, graduated from Skyridge in 2018, and even after graduation, she continued to labor on the project.

“I pitched an idea to all the students back in 2016 to create a statue for the front entrance of the school,” said Jerime Hooley, Gray’s teacher and mentor. “Only two students rose to the challenge. Out of the two, Rhiannon was the only one who created a small-scale model, which was six by twelve inches. She proposed the project to our administrative staff and we were instantly blown away by her artwork. We knew that we needed to make this happen and so we began making preparation.”

The school lacked the funds to make the falcon statue a reality, so it was up to Gray to find a way. She went to great lengths to see her masterpiece come to life. “She went around asking for donations from various companies. Because we had to wait for the money to buy materials the process kept being held up, but Rihanna stuck through it,” recalled Hooley. Not only was Gray patient, but she also spent many hours learning how to weld metal. “She worked with real professionals on the project and was eager to learn from them. I helped guide her through the process, but she did all the heavy lifting,” said Hooley.

This falcon statue was just one among many accomplishments for Gray during her high school career at Skyridge. “Rhiannon was the Skyridge Sterling Scholar and State Finalist for Visual Arts. She was the Vice President of the Drama Council, Vice President of the Abolitionist Club, and the Historian of the National Honors Society. She was in many of our plays and was Assistant Director of Les Miserables. She was also known for creating the sets of school plays. Believe it or not, the list continues,” said Principal Perkins. “She really was an outstanding student.”

Unfortunately Gray was unable to attend her statue being revealed to the public. She is currently serving as a missionary for The Church of Jesus Christ of Latter Day Saints in the Philippines Naga Mission. When the covers were pulled off, the crowd was awestruck by Gray’s falcon. The bird is fierce, with its fixated stare and lengthy wingspan. The detail Gray included on the falcon truly depicts the school spirit of Skyridge. Gray gave credit to the teachers, artists, and donors involved are etched into different parts of the bird. This statue is worth checking out, stop by and take a look.

Students and parents get the scoop at MTECH event