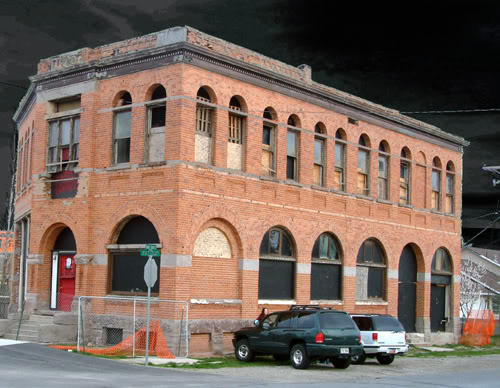 Lehi’s rich history has tales of several buildings home to paranormal activities. Probably the most researched is the story of the old Lehi Hospital, which was located on State Street. The original building was built in 1891 and was a bank, with the second story reserved as a gathering place for meetings of an LDS congregation. By 1924 the basement was used as a crematorium. Stories are told of bodies being cut in fourths to fit into the small crematory oven!

In 1926, the building became the first Lehi Hospital. Folklore has it that the crematory oven was the perfect place to dispose of amputated arms and legs and other medical waste. It has been told that over 4000 deaths occurred in the building, but there is no actual evidence to support this number. Another macabre event has been rumored–a doctor is said to have hung his head nurse from the flagpole.

In 1968, the hospital was closed and remained vacant for many years. The property was purchased by Todd Vincze who hoped to restore the building, but the cost to restore was prohibitive and it was turned into a haunted house during Halloween season.

In 2005, April Slaughter, an investigator of paranormal activities conducted an in-depth investigation of the old Lehi Hospital. Of her investigation, Slaughter said, “The building and the phenomena I encountered within it became so dear to me that I miss it more than I can express. This is where I learned to be an investigator. This is what truly made me a believer.”

Scrooge and Marleys, another building said to be haunted.

Slaughter, along with Chris and Nancy Peterson, and Brian Whitesides of the Utah Ghost Hunter’s Society were all involved in the investigation. Slaughter also worked with a partner, James Boley. She related an experience recorded in TAPS Paramagazine, “We stepped just inside the lobby area of the hospital and I turned on my audio recorder. Just about five minutes after we entered the building, the front door opened, and the owner asked us to leave. At that time, we recorded a voice or EVP saying, ‘Get out quick, haaaa.’’

On March 15, 2011, an internet post from Scot Meyer, a nephew of Lehi’s Dr. John Meyers, concerning the old hospital reads: “My uncle had several paranormal experiences there while practicing medicine. I remember my brothers and I were floating sticks down the deep gutter on the north side of the building, waiting for my parents, who were visiting my brother.  At one point, I sensed we were being watched. I looked up and I saw an apparition of a man near the Northwest corner of the building. I remember him smiling at us—and then he was gone. As a kid, I wasn’t scared, it just seemed kind of odd to me.”

Other ghost stories are told of experiences in the historic John Beck/ Strasburg home located just west of the old hospital, at 791 N. Center. The home, the oldest standing home in Lehi at the time, had been converted into a boutique called Scrooge and Marleys. Several employees had visits by spirits. Liz Anderson tells, “Every time I turned on the vacuum to clean up after closing time, the vacuum would mysteriously quit. I don’t think whoever they were liked the noise,”

One day a customer reported that a blonde, curly-haired girl in a long blue dress had scampered up the stairs to the inventory rooms. Upon investigation, no one was found. The young girl was never observed coming into the store or leaving.

The owner was painting in the house late one night when children’s laughter was heard. Upon looking out the window and examining the whole building no children were found.

Those who worked there often heard voices when the store was empty. They never were afraid because the voices were friendly.

Unfortunately, the old Lehi Hospital was torn down in 2009 and with it the nostalgia of its ghoulish history. In 2014, The Strasburg home was deemed not a viable building and torn down. A replica of the home was built and now houses the offices of Leisure Villas and Mustang Design.